So, on Tuesday, my wife and I went on a little adventure. On Valentine's Day (Saturday), she gave me a ticket to adventure.  No clue about the destination, just that I was to present this ticket on Tuesday.  As the days go by, she's teasing me about Tuesday's adventure.  When we are preparing to go, she ponders aloud whether I should drive and she just gives me the directions as I need them or if she should blindfold me and drive herself.

We decide to go the blindfold route.

I never realized how disconcerting it was to drive, sitting in the passenger seat of one's own car, without seeing anything but hearing the highway whoosh by and an even louder whoosh when we drive through a tunnel.  Then to hear the blaring of horns.  I knew we were in New York City, but then we cross a bridge. (I've crossed enough bridges in my life in a car to know the sound).

Panic sets in with my wife...because parking is nonexistent.  I eventually remove the blindfold (a makeshift blindfold of my bacon scarf) and I see the Barclay's Center so I realize we are in Brooklyn and my internal guesses are close to confirmed.  We finally find parking with barely any time to spare, which was fairly close to the where the event is being held, The Brooklyn Academy of Music at the Peter Jay Sharp Building. 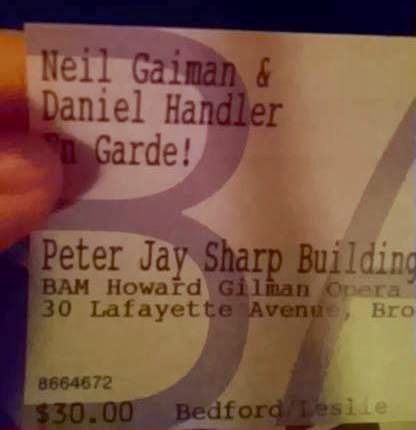 We walk in and my wife hands me the ticket for the event and my guess is correct.

(When she gave me the ticket to adventure, she asked if I  had any guesses and I did guess this thing (as well as a couple of other things), which I'd seen Neil tweet about a few times over the past few weeks).

As for the event itself, it had the feel of a concert with these two great storytellers taking the stage. My wife is a big fan of Handler's Lemony Snicket books and of course, I'm a Neil Gaiman fan.  The evening was spent with them telling stories of writing, stories about story, their mutual admiration for each other. At one point Neil Gaiman mentioned advice Gene Wolfe gave him to the effect that "You never learn how to write, you just learn how to write the book you are writing."

Despite the misleading title of the event as En Garde! the two writers did not engage in sword fighting. Although some of their rapier wit was indeed on display.

They spoke about writing for a younger audience and how important Diana Wyne Jones was to Neil, including when he met her for the first time. Daniel spoke about his new book, We Are Pirates, and its long gestation period before publication. Of course, the conversation turned to Neil's new collection Trigger Warning.

My only real criticism of the otherwise stellar event was that only one booth was present for selling the author's signed books.  With the crowd of people there to see New York Times bestselling authors, two booths should ahve been there.

If the opportunity presents itself for you to sit and listen to Neil Gaiman talk about story for an hour and a half, take that opportunity. For that matter, the same goes for Daniel Handler.

What a fantastic gift! I'm so thrilled for you both. I enjoy both authors very much, though am much more of a fan of Gaiman's work. I'm way behind on Daniel Handler's work, but my wife is a devoted reader and keeps up with it.

Cool. Gaiman often travels to Australia with Amanda Palmer. I need to catch him next time he's here.