My review of Aftermath has been written and posted to SFFWorld, but here I’ll rant briefly about the bullshit “Raid” against the book, Chuck Wendig, and the general anger towards the new Canon from Disney/Star Wars. 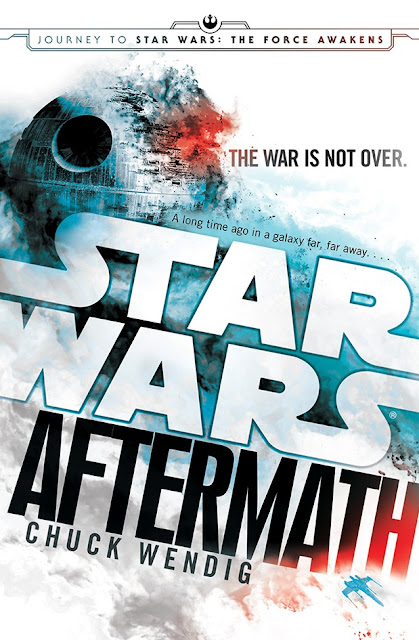 There’s been a lot on social media about not just Chuck’s book, but the whole new initiative Disney is leading for the Star Wars universe. If anything has become fact in genre fandom, it is that nothing is permanent. Back in 1986, DC Comics rebooted their entire universe with Crisis on Infinite Earths … That lasted less than a decade because that reboot was polished a bit in 1994 with Zero Hour and more recently, DCU was rebooted with “The New 52” and most recently, that New 52 was jettisoned yet again not even five years later.

Marvel Comics is in the process of rebooting their universe, primarily to streamline 50+ years of canon and to get the comics universe to be least a bit more consistent & parallel with the Marvel Cinematic Universe.

They close minded people behind the “Raid” don’t see it that way. (Borderline hate campaigns are lead through that link and the events are erased from the page after they happen). They see the destruction of the Expanded Universe as Disney taking something away from them. While it is understandable that people loyal to the EU would be upset, those stories still exist. They cannot take away a reader's experience of reading those stories.

I wasn’t a fan of DC’s New 52, on the whole, but I still own all my Flash comics Mark Waid wrote featuring Wally West. His storyline “The Return of Barry Allen” still remains my favorite superhero story even though the Wally West in that story doesn’t exist any longer. Those stories still have weight.

Taking the disappointment and frustration of “losing” the EU and twisting this emotion to hate leads to … (come on everybody, say it with me) the Dark Side. This line of thinking, while not yet at the level of “frustration” that the Sad/Rabid Puppy movement is at, begins at the same place and for some, is leading down the same road and already has been coined Sad Bantha by John Kovalic of Dork Tower and Munchkin fame.

“Oh no boo-hoo” my fandom is evolving. It isn’t like Disney is deleting those reading experiences from your memories, or taking those books off of your shelves. The Sean Connery James Bond movies still exist. It is one thing to be unhappy with the direction the thing is going, but to actively fall short of smearing what is new? That’s just counter to everything the Force symbolizes.

My point being, these reboots aren’t always a bad thing. If anything, a reboot like this could prove even more successful for many reasons. As much as Disney wants fresh start in their handling of Star Wars it is impossible if for no other reason Coruscant was named by Timothy Zahn. OK, that one is obvious. The new show, Rebels revealed that not everything pre-Disney buyout was going away. A very popular character created four years before the Disney takeover/absorption made an appearance and that same character was hinted at in Wendig’s Aftermath. Whether a popular character like Mara Jade with such a long EU history and legacy are introduced in the new encompassing DSW (Disney Star Wars) canon remains to be seen. However, the people who are in charge of continuity, Lucasfilm Story Group can look at what was successful in the Expanded Universe and bring some of those characters/story elements, etc, forward into DSW in a new “storytelling approach.”

And the people bothered by one of the protagonists in Aftermath being gay? Really? Again, that whole acceptance thing which is a major tenet of the Force and Jedi should be adhered to with this as well. Chuck, of course said it best last week:

And if you’re upset because I put gay characters and a gay protagonist in the book, I got nothing for you. Sorry, you squawking saurian — meteor’s coming. And it’s a fabulously gay Nyan Cat meteor with a rainbow trailing behind it and your mode of thought will be extinct. You’re not the Rebel Alliance. You’re not the good guys. You’re the fucking Empire, man. You’re the shitty, oppressive, totalitarian Empire. If you can imagine a world where Luke Skywalker would be irritated that there were gay people around him, you completely missed the point of Star Wars. It’s like trying to picture Jesus kicking lepers in the throat instead of curing them. Stop being the Empire. Join the Rebel Alliance. We have love and inclusion and great music and cute droids.

(By the way, the book also has an older woman, a mother, rescuing a man. So if that bothers you, you might wanna find a bunker for hunkering down. And I dunno if you noticed, but the three new protagonists of the movie consist of a woman, a black man, a Latino man. The bad guys all look like white guys, too. So many meteors. So little time to squawk at them.)

Bottom line, people need to be more open-minded and accepting, but that line of advice is far from new.
at 9/17/2015