Since only one book arrived this week and it's been a while since I did the intro to this weekly post, here goes...

As a reviewer for SFFWorld (as well as SF Signal and Tor.com) and maybe because of this blog, I receive a lot of books for review from various publishers. Since I can't possibly read everything that arrives, I figure the least I can do (like some of my fellow bloggers) is mention the books I receive for review on the blog to at least acknowledge the books even if I don't read them.

Sometimes I get one or two books, other weeks I'll get nearly a dozen books. Some weeks, I’ll receive a finished (i.e. the version people see on bookshelves) copy of a book for which I received an ARC (Advance Reader Copy) weeks or months prior to the actual publication of the book. I’ve been receiving a greater percentage of electronic ARCs this year which is good because death via drowning in a sea of unread books is not how I want to say goodbye to this world. 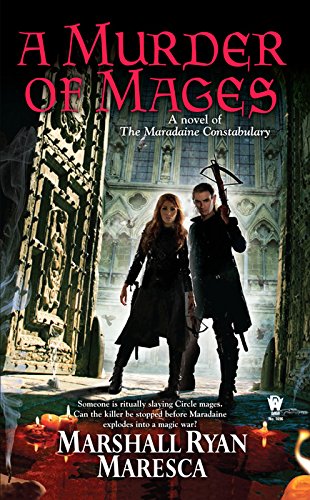 A Murder of Mages: A Novel of the Maradaine Constabulary by Marshall Ryan Maresca (DAW Mass Market Paperback 0705/2015) – Maresca’s second series in the same world as his impressive debut The Thorn of Dentonhill

A Murder of Mages marks the debut of Marshall Ryan Maresca’s novels of The Maradaine Constabulary, his second series set amid the bustling streets and crime-ridden districts of the exotic city called Maradaine. A Murder of Mages introduces us to this spellbinding port city as seen through the eyes of the people who strive to maintain law and order, the hardworking men and women of the Maradaine Constabulary.

Minox Welling is a brilliant, unorthodox Inspector and an Uncircled mage—almost a crime in itself. Nicknamed “the jinx” because of the misfortunes that seem to befall anyone around him, Minox has been partnered with Satrine because no one else will work with either of them.

Their first case together—the ritual murder of a Circled mage— sends Satrine back to the streets she grew up on and brings Minox face-to-face with mage politics he’s desperate to avoid. As the body count rises, Satrine and Minox must race to catch the killer before their own secrets are exposed and they, too, become targets.
at 11/22/2015