I posted my review of The Book of Skulls, by Robert Silverberg yesterday. A very solid dark fantasy/mystery/thriller/coming of age story. In some ways, it reminded me of Stephen King's The Body, the basis for the film Stand By Me.

The Baseball Draft went pretty well this past weekend, the early rounds worked out just as I hoped they would. I was able to pick up the run-producing machines of Derek Jeter and Johnny Damon, so I got my Yankees out of the way early and picked up a lot of runs, doubles/triples, and some stolen bases in the deal. With four keepers per team, the first round of the draft was actually like the fifth round. I'm pretty satisfied with my team, plus or minus a couple of guys, so we shall see what the season holds for my team, the Voodoo Tribe.
at 3/28/2006 No comments:

Lost, while not a complete disappointment, left me unsatisfied. Even more so because of the long wait between new episodes. A little bit of development in the Henry situation, and we see some more backstory about Sun & Jin didn't cut the mustard. The island cured Locke, so why can't it cure Sun? As is too often the case lately with this show (and the Sopranos for that matter) the previews for next week's show was the best part of the episode.

On the other hand, South Park was brilliant. I don't think they could have handled the Isaac Hayes situation any better. On one hand they dug even deeper at the Scientologists, and on the other, they really did a nice tribute to Chef. The soundboard quality of Chef's lines was probably the funniest aspect of the episode, aside from the final fate of Chef.

Best of luck to Jim Rigney (aka Robert Jordan) and his treatment. I haven't been a fan of Robert Jordan's The Wheel of Time for a while, although I admit to enjoying the series when I first graduated college. In recent years, I haven't paid much attention to the storyline, and try to keep my distance from the books. However, say what you will about the books, there's still a person behind the story and output . I wish the man well on his road to treating what looks like a rare and difficult disease.


Lastly, and randomly, here's the mix of music I've been listening to at work:

Over at SFFWorld, I posted a bunch of David Forbes stuff, my review of his novel, The Amber Wizard, the interview Pat and I conducted with David, and a contest for a free ARC of The Amber Wizard. I enjoyed the book, but it was a bit flawed. I think his next book will be even better.

The fantasy baseball draft is approaching - this Sunday I will be drafting the 2006 roster for the Voodoo Tribe. As I mentioned about a month ago, I am keeping four players from the 2005 roster, Ichiro, Brad Lidge, Mark Buerhle, and Cliff Lee. I've been strategizing with my baseball guru pal for about a month now and things look pretty interesting. The most fun is usually the draft day itself, so I'm looking forward to that.
at 3/21/2006 No comments:

Writing is a very personal thing for some people, myself included. When people I work with discover that I'm writing fiction in my spare time, they ask me questions like what is it? What is your story about? Is it a fantasy? Does it have castles? These are things I'm sure many a writer has dealt with when their "secret" is discovered by the people they see on a daily basis.

The current writing project isn't my first attempt, but right now, I know it is my strongest attempt at telling a novel-length story. I've been a lot more consistent with my writing schedule, writing at least five days a week, and very often seven days a week. Is all of it my best work? I don't know, I don't have enough distance yet to judge the quality, but more often than not when I finish my writing for the morning or night, the day seems a lot better. However, when I refer to something, which occurred at an earlier point in my story, I do read some of what I wrote a month or a week ago and a big smile grows on my face. I have the sense that, yes, I have something of a clue about this writing thing.

Another strange thing about funneling your creative energies into fiction writing is how the brain must be continually "on." Writer's jobs never finish once the computer is turned off, and I know that statement is no schematic for wheel reinvention. I'm a person who goes to the gym three, mostly four days a week. What do you think I do between reps and sets? Work out plot points of my novel, or I hone the dialogue I want my characters to use, of course. For some reason, exerting physical energy also allows me to focus my mental and creative energy. This writing, it is really a continual thing.

Take for example this past week. I've been mulling over a plot hurdle for a while now, trying to figure out exactly why a put a character in certain place. I knew the motivation, I had a pretty clear idea of the end result of his visit to this place, and I was trying to work out the specifics of some of the intermediary points. After doing a set of bicep curls, or some other exercise, it came to me. I laid out, perhaps subconsciously, reasons earlier in the story that would logically funnel into later portions of the narrative.

It was at that point I felt like "Yeah, maybe I DO have a good idea of this writing thing." I'm sure the other people doing their workouts in my area were wondering why a huge grin suddenly appeared on my unshaven face, but I wasn't going to tell them. Writing is a personal thing. Besides, they can find out when I publish the book.
at 3/18/2006 No comments:

Email ThisBlogThis!Share to TwitterShare to FacebookShare to Pinterest
Labels: writing

My interview with Keith Brooke and review of his novel, Genetopia, are now posted for your reading pleasure. Keith is a vet at this inter-web-sf-genre thingy and he had a lot of very good things to say in our interview.

So, after a ridiculous hiatus, The Sopranos returned last night. I thought the beginning muddled and confusing, but the show settled in pretty nicely after that. I saw one part of the ending coming from the start of the episode, but was surprised about the other portion of the ending. I'll have to watch my TiVO'd Family Guy tonight.

That is all for now.

I counted up the votes for SFFWorld's Favorite book of 2005 and the winner is R. Scott Bakker's The Warrior-Prophet.

I'm sure most of the people who read this thing have seen the big hub-bub and controversy the new idiot Science Fiction reviewer for the New York Times has caused. My take - I wouldn't be too surprised if what he said was calculated to ilicit the reaction we are seeing across SF spheres. 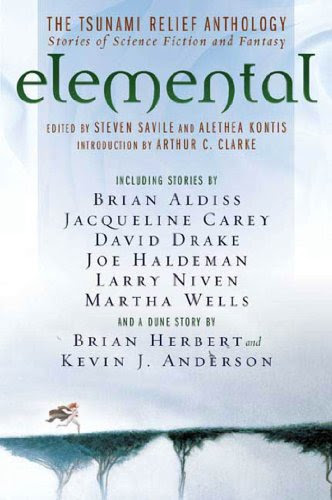 I've just rediscovered Steve Savile's Web site and blog. Steve hangs out at SFFWorld's forums, with a forum of his own. This looks like a big year for him, publication-wise, with a vampire trilogy set in the popular Warhammer 40,000 series with Inheritance.

Elemental: The Tsunami Relief Anthology co-edited with Alethea Kontis, is publishing in May. I've got an advanced copy, and it looks very impressive.

TiVO is a cool thing, most of the time. Based on my viewing and recording patterns, it recorded Equilibrium, which I watched for the first time yesterday. I have been seeing/hearing good things about the movie for a while now and I was happy to finally watch it, I'd seen it compared to The Matrix in some circles. There are similarities, but I think I might like Equilibrium more than The Matrix, or at least as much.

I think the writer of the film, Kurt Wimmer, must have read Orwell's 1984 every year of his life, because there are a lot of parallels. The premis is that after a third World War, society has crawled up from the wreckage into a totalitarian state. Bale's character is a policeman, who tracks down and elimates people for the offensive of showing and having emotions. Not exactly the most original plot but I really think the execution was spot on. However, Bale's character kicks a little bit more ass* than Wilson Smith ever did in Orwell's Oceania. Between this and Batman Begins, I think Bale might have it in his contracts that he has to kick ass all the time. Granted he can never kick as much as ass-kicking as Chuck Norris, but to say he handles himself pretty well is an understatement. Anyway, I'm something of a sucker for post-apocalyptic stories, and I do think the story was pretty strong, the SFX and future world interesting looking and as I said, a lot of good fight scenes, particulalry when Bale's character was having what looked like a sword fight with Robert the Bruce. The fight was choreographed like a sword-duel, but the characters were using pistols, it made for something interesting I haven't seen much of before. I'd like to see some kind of special edition DVD of this thing.

This movie should have received more attention than it did when it was in theaters, considering the familiar faces in the cast - Sean Bean, William Fichtner, Taye Diggs, and Emily Watson. Granted they are not all huge stars, but they are all recognizable.

*of course by a little bit more I mean not just a can of whoop-ass, but an entire brewery's worth.

I posted my review of Judas Unchained today, while I liked it a lot, I thought the pace slowed down a bit too much from Pandora's Star. On the whole, these two books are extremely impressive.
at 3/06/2006 No comments:

Click the above banner to read the excerpt we are hosting on SFFWorld.com. Jeff VanderMeer is an amazing writer and this is the definitive edition of what many consider to be one of the most important and imaginative fantasies in the past ten years. But most of the poeple reading my blog already know that.
at 3/04/2006 No comments:

I know a few of the people who read my blog enjoy the work of M. John Harrison. This month in our Fantasy Book Club our feature book for March is Virconium by Mr. Harrison. Even though it is early in the month, the discussion is pretty lively.

I am hoping to get to the book myself very shortly as I've had it on my shelf since November of last year, when the classy-looking US version at left was published by Bantam Spectra.

In Science Fiction during March, we are discussing The Handmaid's Tale by Margaret Atwood. I liked the book quite a lot when I first read it years ago in college and a good bit of it still sticks with me today.
at 3/02/2006 No comments:

I'm happy that the Olympics are over and the NHL can resume their normal schedule, at least until the All-Star break.

I finished up David Forbes's The Amber Wizard and should post my review in the next couple of days. On the whole, I enjoyed it, and I will elaborate in my review.

My laptop crapped out the other day which is really annoying. I suppose I can't complain too much considering the laptop was free. I still have the desktop PC, but the laptop made life, and writing especially, much more convenient.
at 3/01/2006 No comments: