Sunday was six years of marriage for Mr. and Mrs. Blog o' Stuff. Six of the best years of my life. One year ago, we spent the weekend in Washington D.C. and were anxiously preparing for the move into the new house.

This year we celebrated by seeing the aforementioned X-Men III before I cooked a batch of my world famous chile, one of Mrs. Blog o' Stuff's favorites. On the whole, it was a relatively relaxing day, despite the rains. She got me an official Martin Brodeur jersey, something I've been wanting for a while. Not too surprsing, since Mrs. B is responsible for all of my sports jerseys. I got her, well actually us, tickets to go see Spamalot. It was a toss up between that and seeing the hilarous Stephen Lynch in The Wedding Singer. The British humour won in the end, but we do need to see Lynch on stage again.

Today, we went to see Superman Returns. I had heard so many mixed things about the film, I wasn't sure what to expect. I liked it quite a bit, despite some misgivings, including the suit. I bought Routh as Clark Kent much more than Superman. I was never a fan of the Lois Lane character, and Bosworth was effective, I guess. I liked the story, I thougt Superman's pure power and his powers were displayed very effectively. Spacey nailed Luthor. On the whole, I was entertained and on the edge of my seat in the right scenes. The movie does bode well for the future of the franchise, as long as Routh packs on about 25 pounds of muscle.

I posted my review of Steve Cash's Time Dancers a day or so ago. Despite it being written pretty well, I just didn't feel engaged by the characters or the barely-there plot. Perhaps if I read the first book, The Meq, I would have had a different reaction.

Finally, I caught the new X-Men movie over the weekend. I went in with very low expectations, based on what others have said, but still hoping to be entertained. I thought it was entertaining, but I did have problems with it, especially the characters who didn't quite make it to the credits. I know movies and comics are different mediums, but when there is such an established universe and set of characters, I see no real reason to mess with what has worked before.

This blog really is becoming something of a wasteland, no? Perhaps I should take it out in the backyard to shoot it and put it out of its misery. Ah, at least I have all my links here, which is what I've been using it for lately.

A new job will do that (especially when a lot of the posting prior to this new job were done during work hours at the previous job). I have been focusing on writing fiction, I finished a short story last week and started another one very recently. I haven't jumped back into a full-length novel yet, though. I want to work on some more stories first.

Wizards, Jaguarmen, and Robots oh my! 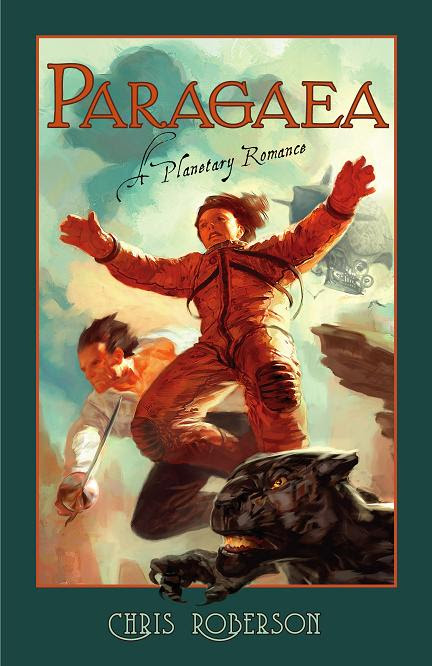 About a week ago, I finished up Chris Roberson's amazing Paragaea. He did so many things right in this book. Dinosaur-riding pirates, jaguar men, and quantum physics. As it stands, the book is very near the top of my reads for 2006. Check out the review and Roberson's Web site for the book. Chris keeps a consistently interesting blog, where he posts excerpts and all sorts of kewl Science Fiction goodness. Read the book and keep up with his blog. Oh yeah, he also owns/runs Monkeybrain Books.

I ordered the tickets yesterday and they should be coming over the e-mail soon - Godsmack with Rob Zombie and Shinedown. I don't think I could as for a better combo for hard rock. I've seen all three bands perform and they are all great live acts.

I started a short story and a novel in the past week. They are completely unrelated to each other. However, they both are fighting for my creative attention at the moment. I know I should focus on one, but they aren't letting me do that.
at 6/18/2006 No comments:

On the writing front, I started something today. I had a pretty vivid dream that felt like a story, so as soon as I woke up, I wrote what I remembered. I've got a lot of thoughts floating around on it right now, but I like them. However, I want to name these folks right. I don't want them to have hokey sounding names, but I also don't want to have a sorcerer with a bland name like Fred. Then again, Fred the Sorcerer could be a nice little comedic fantasy.
at 6/12/2006 No comments:

The Devil is Done...for now

Well, things happened a bit quicker than I expected and the ending wrote itself. I can officially say I've completed the novel. At this point, I'm calling it Devil in the Barrens, although I don't know if that is final. I like the sound of it the more I repeat it to myself, but who knows. Maybe when I do the first edit/re-write something else may come to mind. Of course, I've only finished the first draft. The sucker needs to sit for a while untouched and stay away from me so I can look at it with fresh eyes, touch it up, and cut it apart with my editorial hands.

I also know the story continues in another novel, but I don't want to start that until I give the first book another re-read. I realized fairly early on in writing Devil I wanted to tell a story about these characters and the worlds they visit in more than one book.

Besides, I've got a couple of other unfinished novels I want to complete, perhaps one by the end of the year. I'm also going to work out some short stories I've been mentally throwing around for a while. All I know at this point is that I have a number of stories I need to tell.

The Sopranos ended with a family scene, like most of their season-ending episodes end. I wasn't too thrilled with this half of the last season. Sure there were some interesting points along the way, but I found myself more annoyed than entertained.
at 6/06/2006 No comments:

The month of May was Metal Month on VH1. They played more Metal videos, they premiered the Pantera Behind the Music and recently completed the four-part Heavy: The History of Metal documentary series. They are also running Supergroup, a reality TV show with some great and legendary hard rock/metal musicians trying to form a band and write music over 12 days: Scott Ian of Anthrax, Sebastian Bach, Evan Seinfeld of Biohazard, Jason Bonham and the Motor City Madman - Ted Nugent. I’ve been a big fan of Anthrax since they started writing songs about Stephen King books and Judge Dredd many years ago. My first concert was Aerosmith, with opening band Skid Row, so yes, I’ll be tuning in every week to watch this show.

Now to the History of Metal - of the four episodes on this thing, the first two are probably the best. These two episodes (rightly so) spend a great deal of time on Black Sabbath, Judas Priest, Led Zeppelin, and Iron Maiden. Sabbath and Maiden are probably two of my favorite bands, metal or not. The third episode was mostly about the glam rock scene in LA and the New Wave of British Heavy Metal while the fourth episode spent collectively, about 15 minutes on the big four as they are sometimes known: Slayer, Anthrax, Megadeth, and Metallica. On the other hand, about 15 minutes was dedicated to Marilyn Manson, who is controversial, but not explicitly Metal and will not be as remembered as, at the very least, Metallica. Barely any mention of Pantera, the band many (including myself) feel helped to keep metal alive during the grunge years/early 90s, barely any mention of some of the current crop of metal bands. I find a little odd that the big four get only a glancing mention, especially when Geezer Butler of Sabbath states: "Thank God for Metallica" and they spend half of an episode on hair bands like Poison and a quarter of an episode on Marilyn Manson.

What do they close out the four parter with? A reunion show of Twisted Sister. Yes they were an important band, and were big 20 years ago. However, they aren't exactly where Metal is now, and where it is going with bands like Trivium, Shadows Fall, Hatebreed, In Flames, Lacuna Coil, Killswitch Engage, or even progressive metal like Dream Theater and Stratovarious.

This blog has been on stutter steps lately, the new job is really taking up my time. That and finishing up the novel I started writing in November. I told myself when I knew I wouldn’t finish it for NaNoWriMo 2005, I wanted to have it finished by this summer. It really looks like that will happen. Once I feel satisfied with the ending, I save it, print it, and keep away from it for a few months.
at 6/02/2006 No comments: