I posted my review of Karen Miller’s Empress today. It started out fairly strong (if predictable), but by the end, the novel turned into the book I've disliked the most so far this year. Not all protagonists can or should be likeable, but when you hate the protagonist by the halfway point of the novel, it doesn’t make for a good reading experience. In addition, the novel itself was uneven, predictable, repetitive, and choppy.

I also posted an interview Pat and I conducted with Kay Kenyon. He’s had it posted on his blog for a bit now, and now it’s up at SFFWorld.

Owen (kater in the SFFWorld forums and one of the mods) posted a cool interview with Brandon Seifert creator of the independently online published Witch Doctor comic. The interview also has some great, great sample artwork.

My addiction to the Dresden Files keeps growing with each book*; I finished Summer Knight last week. I usually read two books at a time, one at work and the gym the other at home. I couldn’t be pulled away from Summer Knight.

Mark posted a stellar review of Richard Morgan’s forthcoming and anticipated Fantasy novel, The Steel Remains. My copy arrived not too long ago and I’ll be getting to it shortly. In the past year or so, I’ve received so many enticing books from various publishers I simply don’t know which book to read next, although I do have a very loose system. Some of the books are Advance copies while some are publication copies I’ve received, and it is really impossible to get to all of them.

*One of those advances is Backup, the Non-Harry Dresden novella being published in October by Subterranean Press with artwork by Mike Mignola**. I’ve still got the final installment of Greg Keyes awesome Kingdoms of Thorn and Bone on my plate, or what Aidan calls the Pile o' Shame, although my pile is a little different than Aidan's defintion. The pile includes collections from Gaiman, Wolfe, Swanwick, Steele, the first of Strahan’s Eclipse anthologies, all the Malazan books up to and including Reaper’s Gale, two of Paul S. Kemp’s Erevis Cale novels, two Culture novels from Iain M. Banks, Peter David’s forthcoming Tigerheart, Jeff Somers’ Digital Plague, the second Marla Mason novel by T.A. Pratt, the final novel in the Star Wars New Jedi Order megaseries, and a forthcoming novel from Greg Bear (City at the End of Time) that looks very interesting. I’ve read some of Bear’s work and enjoyed it, this looks like a good opportunity to “catch up” with him. This whole paragraph isn’t a complaint by any means, just a rambling.

Lost and Battlestar Galactica both continue to make me wish their hour-long episodes didn’t end so quickly. Although Lost didn’t give us any concrete answers this past Thursday, it was enticing and answers seem closer to the horizon. I know the creators really enjoy Stephen King’s work and this week’s episode seemed to hold some thematic similarities with The Dark Tower. I also think BKV’s handiwork was evident in this episode. Battlestar had some more good Baltar stuff with Roslin becoming more of a hardass. Both shows don't clearly paint their heroes - Ben Linus started out as a villain and now he looks like he might be the hero. Roslin seems to be thrust more and more into the antagonist light.

**which only fuels the question – What if Harry met Hellboy? That would be a very cool multimedia crossover, wouldn't it?
at 4/28/2008 No comments: 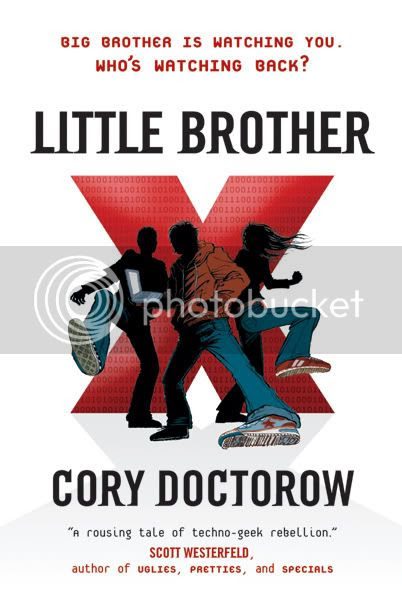 With one week before publication, I’ve posted my review of Cory Doctorow’s Little Brother. The quick and dirty is that Cory Doctorow may have written the quintessential Young Adult Science Novel of the early 21st Century. I loved the book and have been telling people who are willing to listen.


Here’s an excerpt from my review:

Doctorow’s novel is scary because it resonates so much with the real world; personal freedoms are sacrificed in order for our own “safety.” Doctorow evokes both Orwell and Philip K. Dick in the sense of paranoia, but Doctorow (obviously) brings a more modern sensibility to the fore. Doctorow has been at the forefront of electronic rights and in the science fiction genre for the past few years, so the culmination of his background and those two authors proves for a great combination. ..... I found it very difficult to put the book down. Entertaining, enlightening and eye-opening, Little Brother will only further reinforce Cory Doctorow’s presence as one of the visionaries of free speech advocacy and great storytelling in the 21st Century.

BSG was, again, pretty good although I have to admit to understanding the frustrations other characters are feeling towards Starbuck. I suppose that's part of the hook with her. I had a baaad feeling that one of the four "revealed" cylons would really go over to the Toaster side, but damn did Tory dive head first. Granted, Caly wasn't much of a screen presence in recent episodes (going back to last year) but her character and who she represents was pretty important. I know they can't cover the whole cast of characters each episode, but I don't think I'm the only one who thought Baltar's absence this past episode was a noticeable gap. All that aside, the show has me glued to the TV.
at 4/21/2008 No comments:

Two reviews went up yesterday, both of books I very much enjoyed. A World Too Near is the second book of Kay Kenyon’s The Entire and the Rose – a universe spanning modern planetary romance. Although Kenyon already had an established reputation in the genre, this saga is looking to be a breakout saga having received a great deal of acclaim when the first book, Bright of the Sky was published a year ago. Overall, A World Too Near continues the already enjoyable saga and more importantly, whets the appetite for more. 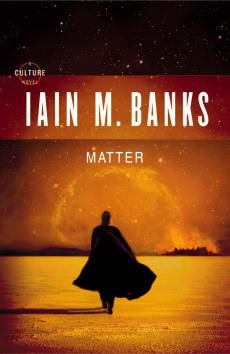 The other book is Iain M. Banks’s latest Culture novel, Matter. This was my first Banks novel, and subsequently, my first Culture novel. I can understand why the books are highly regarded and really enjoyed this one. I will not lie and say parts of it reminded me a bit of Dune, and that I really dug the seamless blending of a Science Fictional setting with a bit of a Fantasy feel.

The Devils managed to stay alive last night in overtime. Granted the winning goal was something of a flukish goal, but a win is a win. That said, the Devils did a lot of things right; and broke some stumbling blocks they've had for a while against the Rangers, namely scoring and getting more than one goal.

Lastly, Battlestar Galactica was again very good. It didn’t blow me away in the same way that the season opener did, but the hour still went by entirely too fast. There was some interesting stuff between Baltar and Tory, while Starbuck’s crusade to bring Galactica back to Earth is proving to raise some thought-provoking questions.
at 4/14/2008 No comments:

I posted up my review of Wastelands a terrific anthology edited by John Joseph Adams. I thought the collection was extremely well-rounded and looks to be a nice start to Adams’ career as an anthologist.

We also re-did the front page at SFFWorld over the weekend, highlight some good reviews and interviews.

Battlestar on Friday was very, VERY good. I thought it worked extremely well as a foundation for the final season and the space battle in the beginning was awesome. However, I think Scott Ian summed it a bit better. I’ve been a fan of Anthrax for many years, and knew Scott enjoyed the show, but him doing a blog for it is pretty cool.

I feel the same way about Battlestar that I do about Lost – I don’t want the hour that either show is on to end.
at 4/08/2008 No comments:

I just finished Cory Doctorow's newest/forthcoming novel, Little Brother, earlier tonight, and it just might be the best book I've read this year. Granted it is only April, but the book was fabulous and very thought-provoking. I'll be posting a review of this when the pub date gets closer, but this book should be on everybody's reading list for this year. It is that good and that thought provoking, one of those books that makes you look at the world around you and question that same world.

It’s been a while since I posted, Mrs. Blog o’ Stuff and I were hit last week with the worst colds we have ever had. Sleeping and clear breathing were just not options, let alone spending more than a half hour on my computer after a day in the office.

I put up my latest review, Peter F. Hamilton’s The Dreaming Void, which I really enjoyed. A lot of people were looking forward to this book and I doubt any of them will be disappointed. Epic and vast are just the tip of the iceberg when it comes to describing ’s latest.

I’ve also got to mention that a couple of weeks ago, BantamSpectra published the edition of John Meaney’s Bone Song, a book I reviewed when it was published by Gollancz about a year ago. After a few correspondences with the editor, I’m really thinking of listening to this song once again. At the very least I can’t wait to read the sequel, Dark Blood when it publishes in about a year.

Baseball season is officially on and I’m really excited. I didn’t realize how many players switched teams in the off-season, so it should be another fun season. That is of course unless the Red Sox win it all again.