Do You Trust Me?

My review of Gradisil by Adam Roberts is now up at SFFWorld.

This is the latest critique on reviewers:
http://blogs.guardian.co.uk/books/2007/06/widen_your_literary_universe_w.html
at 6/26/2007 No comments: 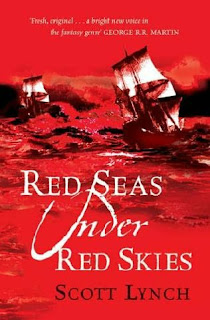 I posted my review of what thus far is my favorite book published this year: Red Seas Under Red Skies by Scott Lynch. Scott did everything right in this book, much in the same way The Lies of Locke Lamora had all the right elements. The main difference is that Scott’s writing and plotting are even tighter with one book under his belt. I was lucky enough to get an early look at the Gollancz-UK version of the book, but chances are I’ll wind up picking up the US edition as well since I’m something of a completist.

Zombies - Is it the End of the World?

Waking today presented no problem. Unfortunately, the remainder of the day wouldn’t be so easy. The following days would not begin so harmlessly, I’m sure. My wife had already left for work by the time I was fully conscious, I vaguely recall her peck on the cheek before she descended the stairs. Nothing out of the ordinary there.

By the time I got in my car and made the turn onto the highway, I knew the day would be a problem. Cars were at a dead halt on the road, many of them crashed into each other. Since it was late spring, I was driving with my windows down, which allowed the stench of death to waft into my car. Once you smell death, you know it when you smell it again. There was nothing I could do to get on the road, even the shoulder was jammed. My only hope was to turnaround and try driving the back roads.

As I was doing that, I needed to make a phone call. I dialed my wife’s speed-number on my cell phone and waited what seemed an eternity for her to answer. “You aren’t going to believe this,” she said before I could say anything.

“I might, I’ve just seen the highway at a complete dead stop.”

“Well, I know why. There is a Zombie Uprising.”

“Shit, I just knew life was going too well. They say one happens every hundred years or so, right?” I asked.

“Yeah, at least that’s what my Dad says. His Dad supposedly lived through the last uprising,” she responded. I remembered hearing the tales from her father on a couple of occasions, mostly after a random Zombie or two shambled in from the woods. Random Zombie sightings, while not exactly common, weren’t entirely rare, either.

“Try and get home, keep you cell phone turned on,” I said, hearing some strange grunting in the background. “I’m going home to get some helpers.”

She knew what I meant, the old baseball bat, the axe, sledgehammer and pickaxe. They worked well enough on the lone zombies that shambled around on occasion. “I’ll do what I can, but the Zombies are starting to flood everything. I’m only halfway to work. I love you.” She said.

“I love you, too.” We both ended the call. I felt so goddamned helpless knowing she might be stuck in a death trap with her brains enticing the Zombies.

Zombies have been a semi-regular occurrence for a few hundred years and for some reason, they rise in droves once a century. Not too dissimilar to the loud buzzing cicadas, except the Zombies flock in greater number, eat brains, and smell a lot worse. In all the Zombie movies, comics and cartoons one thing that can never be conveyed is their utter stench. After all, a Zombie is a corpse that eats people, so the smell is bound to be offensive.

The Zombie Uprising that followed the Revolutionary War nearly destroyed the world. Only through the assistance of the various Native American tribes were the early Americans able to fend of the Uprising. I would hate for it to be the end of the world, but these Zombies might just be smarter.

Getting back onto my street wasn’t the refuge I hoped; Zombies were marching down my street. Marching is a strong word, but they did seem to share an unheard tune as they walked in cadence. I shouldn’t have been too surprised; I lived on the same street as a large elementary school, so there were plenty of potential new Zombies ready for the making should the Uprisers make their way to the school. I drove my car head into a bunch of them and turned into my driveway.

If the fiction couldn’t capture the smell of Zombies, they certainly captured the speed, or lack thereof. I was able to grab my makeshift weapons, drop a few in the trunk and throw one on the passenger seat. It was then I noticed my neighbors had been Zombified. I really liked Janet and Kyle, but they were no longer themselves. I hacked at them and was about to turn back out of the driveway. Much as I hate to admit this, I would expect them to do the same if our situations were reversed.

For whatever reason, the Zombies I didn’t run over continued to trundle down my street, almost as if I wasn’t there. I wasn’t complaining, which brings me to this point. I don’t know who will be reading this, but I have to blog this like it is the end of the world. The Zombies are rising; grab anything you can– a shovel, a pickaxe, or a baseball bat and swing for the fences.

Wish me luck as I try to fend of the Undead and get to my wife so we can live through this Zombie Uprising. Let’s hope I can post back here tomorrow with some good news.

My latest review, David Anthony Durham’s Acacia Book I: War with the Mein, is now up at SFFWorld.com. Like last year, this seems to be a strong year for opening novels for multi-volume sequences. Last year Scott Lynch, David Louis Edelman, and Sean Williams* all launched impressive sequences. This year has already seen Patrick Rotfhuss and now David Anthony Durham’s sequence launch. Both authors have been making the rounds with interviews on SF Web sites and blogs.

*Technically Sean Williams saga launched a couple of years ago, but 2006 was when it was published in the States.

Also, I know Joe Abercrombie was highly-touted last year, so I'm looking forward to reading The Blade Itself when Pyr publishes it later this year.

I've been hearing a lot of grumbling at night lately, and it has been getting louder over the past couple of days. I could swear I'm hearing the word brains, but I can't imagine why.
at 6/11/2007 No comments:

I posted my review of Peter David's Darkness of the Light, the first book in his Hidden Earth saga. I've been a fan of Peter's for a while, so I was looking forward to reading this book. Set in a far-future earth, the book has a feel not too dissimilar to Jack Vance's Dying Earth. If not in style, than in setting and some of the humor.

Only one week remains in SFFWorld's contest to win an advance copy of the book.

On the Malzan front, I'm still making my way through Deadhouse Gates and still enjoying it. I don't want to rush through these books, since the series is both unfished and the US versions haven't caught up with the UK. But goddamn does Erikson make it tough to close the book.

Nine days remain until the Uprising. I am mentally preparing.
at 6/04/2007 No comments:

Bring on the Zombies!


I'm joining the end of the world: 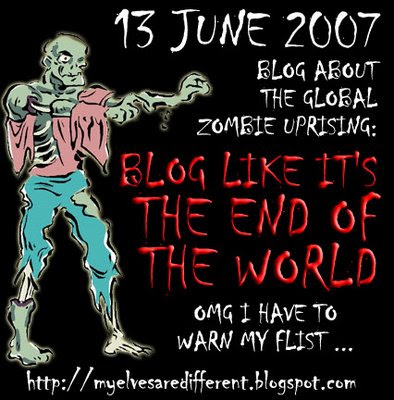