The wizard detective, the vampire hunter, the werewolf D.J, these are but three of the popular characters in one of increasingly popular subgenres of speculative fiction. Some call it supernatural fantasy, others urban horror, while others call it urban/dark fantasy. No matter what it is called, readers know what it is and have been gobbling up many of the titles over the past ten years or so as the this subgenre has exploded (yeah, next I’ll tell genre readers that the sun rises every day). Just check out this fairly extensive discussion at SFFWorld. For my part, I’ve read some of the authors but by no means have I read all of them, nor would I completely consider myself an expert on the subgenre. However, I am finding myself drawn to books of this ilk more strongly. Writers like Neil Gaiman, China Miéville, and Charles de Lint wander into this territory, but they are not exactly the authors to whom I’m referring. What follows is just a brief overview of some of the writers/series.

When and why has the subgenre proven so successful? The character and set of books that kickstarted this trend would arguably be Laurel K. Hamilton’s Anita Blake: Vampire Hunter series. These books were able to catch on to the genre-reading public in no small part because of the success of Anne Rice’s Vampire Chronicles and perhaps more so, Buffy the Vampire Slayer (TV). Although the Anita Blake books may not have been the earliest in the latest trend, they have proven extremely popular. Vampires have always fascinated people and between Rice’s success in humanizing them and the strong, powerful female protagonist, Hamilton’s series is in retrospect a no brainer for success. Of the Anita Blake novels, I read the first four or five before being pulled away. Readers have criticized the later books for being little more than erotic fantasy with an overabundance of sex, but the early books are very good and are considered by some as a benchmark in this subgenre.

Jim Butcher
Another ingredient for the success of this subgenre probably has something to do with the presence of these creatures in the “modern/real” world and people possessing arcane abilities in modern society. Another highly popular example of this would be Jim Butcher’s Dresden Files. Harry Dresden is the only practicing wizard listed in the Chicago yellow pages and as such, he is 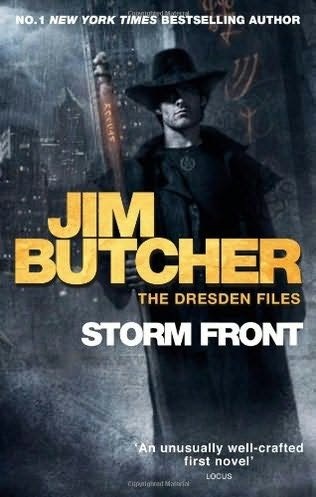 on retainer to the Chicago PD’s Special Investigations division. Cases involving werewolves, vampires, ghosts and other things that go bump in the night are his purvey and when the Police can’t wrap their heads around such a case, they call in Harry. I’ve only read three of these books but they could turn out to be a favorite series if the books continue to entertain me in the same fashion. The series is in the double digits with little sign of slowing down, so the good part is that there are plenty of books for me to read. The world Butcher has created for this milieu is incredibly detailed, and very well thought-out. He’s got the White Council, which is the governing body of the practice of magic, several Vampire Clans, a faerie world (Nevernever) two which Harry travels. A sure sign of the success of this series is that it started out in Mass Market Paperback and with the 5th or 6th book, jumped into Hardcover for the initial release of each book.

A short-lived series on the SciFi channel might have helped to raise the awareness of this already popular series (the first book, Storm Front, is probably in its 20th printing by now), but got the Axe. After a slow start, the series really gained momentum but the ratings apparently weren’t to SciFi’s liking, despite being somewhat comparable to those of Eureka and the abysmal Flash Gordon.
SFFWorld’s Hobbit reviewed many of the books in the series, beware spoilers though: (1) Storm Front (2) Fool Moon (3) Grave Peril (4) Summer Knight (5) Death Masks (6) Blood Rites

Before Anita Blake and Jim Butcher; however, Glen Cook was writing a little series about Garrett (Glen Cook Wiki entry), a Private Investigator in a “Fantasyland” called TunFaire. I personally haven’t read the books, but one member of the SFFWorld forums whose opinion I can trust (KatG) consistently recommends this series. From what I’ve gathered, the series functions very much like a hard-boiled detective story with goblins, orcs, and wizards thrown in the mix. Based on my enjoyment of Cook’s Dread Empire and Black Company, I’ve really got to check out these books, of which there are already 11 books.

A werewolf in modern times should be able to fit in, shouldn’t she, especially if wizards and vampires can? Well, Carrie Vaughn’s Kitty Norville is doing her best as a radio talk show host in the series that bears her name. The first book, Kitty and the Midnight Hour published in 2005 to some positive reviews, including my own review. The fourth book is out this year and the Science Fiction Book Club put the first three books under one cover in one of their popular omnibus editions. The subsequent books seem to follow the trend of pleasing readers.

Liz Williams has a very strong series going with her Detective Inspector Chen novels. At least based on the first novel, the series seems to be working with a buddy-cop/police procedural template whilst mixing elements of magic and Chinese/Asian mythology. Night Shade Books is publishing this series, which is helping to make their already impressive list of authors even more impressive. Also, the first book Snake Agent was one of the launch titles for Night Shade’s Mass Market Paperback line. This is a very promising series as I said in my recent review of Snake Agent. 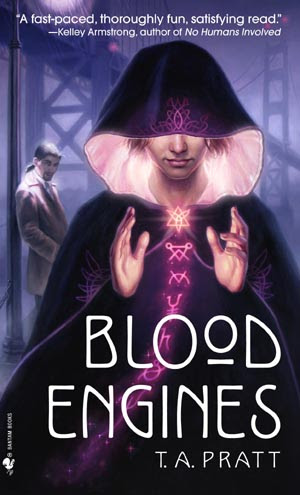 Tim Pratt (writing as T.A. Pratt) is two books into his Marla Mason series. I’ve only read a short story from that world, but what I saw I liked. The short story had a very Lovecraftian feel to it and I’ve got the first book, Blood Engines, on my To Buy pile. Here’s a nice review from Robert over at FantasyBookCritic. 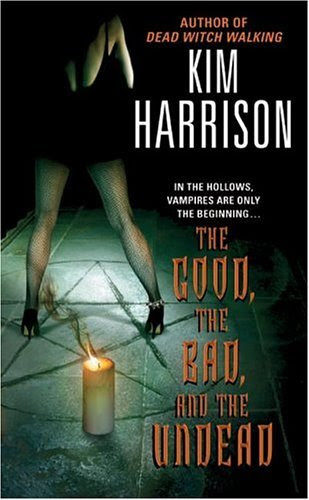 Kim Harrison is another popular writer who seems to churn out a new book every year in her Rachel Morgan/The Hollows series. On the surface, the series blends elements of post-apocalyptic fiction with the “wizard detective,” or in this case, the “witch detective.” Morgan is similar to Harry in that she is an adjunct of sorts to the local law enforcement. I think the post-apocalyptic elements to this series sound interesting so I will eventually check out the books. My friend’s wife really digs this series, so I may just have to borrow the first book. Here is a recent discussion at SFFWorld.

Wikipedia helped me sort out a couple of things with this little article as did the folks in the SFFWorld forums, including the participants in the Supernatural Fantasy: Ghosts, Vampires, Werefolk and Wizards tread.
at 2/28/2008 No comments:

I was asked by John DeNardo, of SF Signal, to participate in one of their regular MIND MELD roundtable discussions. The subject for this go-round was Which SciFi Movie Ending Would You Change? As the introduction to the article states, I’m a “luminary.” Cool! I’ve been popping onto SF Signal on a daily basis for a while now as there is always something interesting in their great coverage of the genre.

Thanks to John and the folks at SF Signal for letting me join in the fun. My response is the last of the group, the title of the movie I chose lies hidden within this post. Well, sort of.

Another Monday, another book review posted. This time, it's the first of Liz Williams Detective Inspector Chen novels, Snake Agent. I liked to book a lot for many reasons; great pacing, interesting characters, a "fresh" (as in not often utilized) mythological backdrop. Williams hit a great chord with the book and it fits perfectly in the ever growing and popular subset of fantasy - the supernatural mystery. I've got more to say about this little subset, but that'll be for another post later in the week.

On another note, if somebody would have asked me before the show started whether or not I would keep tuning in every week to watch Terminator: The Sarah Connor Chronicles, I would probably say no. It keeps drawing me back in every week though.
at 2/25/2008 No comments:

The Long-Awaited Dance is Covered 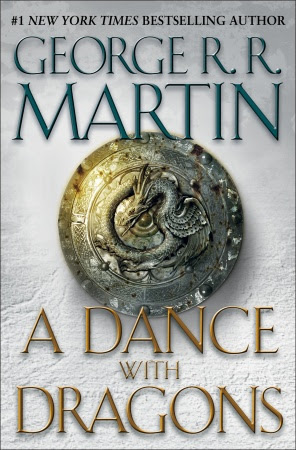 Email ThisBlogThis!Share to TwitterShare to FacebookShare to Pinterest
Labels: A Song of Ice and Fire, George. R.R. Martin

I just posted my review of Helix by Eric Brown, published last year by Solaris Books. This book seemingly fell under the radar, shame because it was a solidly entertaining novel. This is something of a minor travesty because Helix is a damned good book – Good Space Opera; a good study of characters; a novel of first contact; and a really cool “Big Dumb Object.” The short of it: another quality novel from Solaris Books. For the long of it, check out my review.

Before They Are Hanged by Joe Abercrombie.

Those who care can click HERE for the full results.

I just checked out the trailer for Indiana Jones and the Kingdom of the Crystal Skull. I'm a bit non-plussed at the moment, I expected to be a little more wowed by Spielberg & Lucas; I expected to be even more charged up to see it. Oh, I'll be seeing it in theaters regardless.
at 2/15/2008 No comments:

Anybody who knows my reading tastes knows I consider Matthew Woodring Stover's Acts of Caine one of the unsung great sequences in modern fantasy and science fiction. So, learning my lessons from the many amazon.com teases for A Dance with Dragons and A Feast for Crows, I tempered my enthusiasm when I saw Caine Black Knife on amazon.com with some historical perspective.

Well, that just changed because Mr. Stover made an encouragining annoucement on his blog yesterday. Woe is me, I guess I must re-read two of the my favorite books. Again.

The Connection has Been Bridged 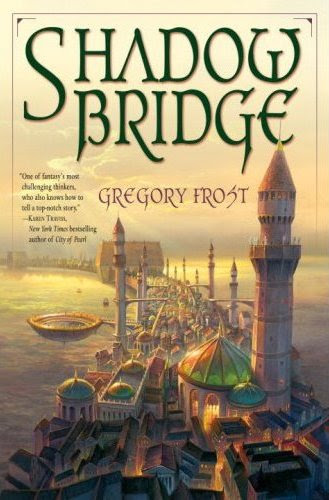 My internet connection at home has been veeery shaky lately, I’ve had DSL for 3+ years where I’m at now and a couple of years in my previous residence. It just stopped working about a week ago, so I upgraded to cable internet. So far so good.

Right, in that time, I’ve been unable to post my review of Gregory Frost’s Shadowbridge. Fortunately, I did that last night. The book was pretty powerful and is one of those that has a lasting effect. That is, it stays with you long after you’ve put it down. The sequel/conclusion, Lord Tophet, publishes later this year. 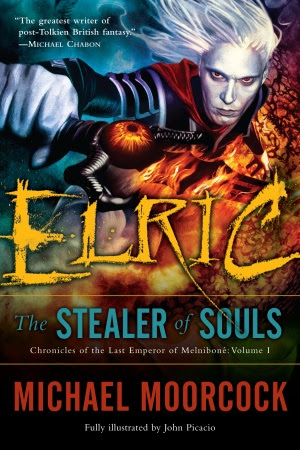 of Souls. Even though I’ve read the Elric stories in a couple of different books before, this collection (first of a series) looks to be the best of the bunch despite liking the White Wolf editions from a couple of years back. With a striking cover and interior art by John Picacio, this edition also sports an introduction by Alan Moore. Furthermore, there are some “historical” snapshots of Elric, such as magazine covers of Science Fantasy where the stories first appeared as well as the cover of one of the early editions of Stormbringer. Even if you already have one of the Elric collections, this is worth having.
at 2/05/2008 No comments: