I just posted my review of Tobias Buckell's Ragamuffin, a very entertaining space opera. Earlier today, Mrs. Blog o' Stuff and I saw Harry Potter and the Order of the Phoenix. I was entertained for the most part, but thought the pacing was a little uneven. The film was a bit choppy during the beginning where too many events from the book were condensed (or seemingly ignored). The final wizard battle, while great to watch, came together without enough build up. I understand things will be cut from the book, but I don't see any reason why this film couldn't have been three hours in order to cover more of the plot elements from the book.

It has been a loud couple of days here at home, I had some minor construction done in my basement. I tell ya, nothing compares to the sound and feel of a jackhammer blasting away at your basement floor at 10:30 in the morining. The rain back in April really screwed me over and since then, water has become too good of a "friend" to my basement. So, over a five-to-six hour period yesterday, about 4.5 tons of concrete was removed from my basement so a drain system and sump pump could be installed. I will no sleep much better during rainy nights.
at 7/17/2007 No comments:

A couple of days ago, I posted my review of The Dark River by John Twelve Hawks. I liked it almost as much as The Traveler, the first book in the sequence, and on the whole, the novel did a great job of continuing the story, further developing the plot/world, and gearing me up for the final volume. 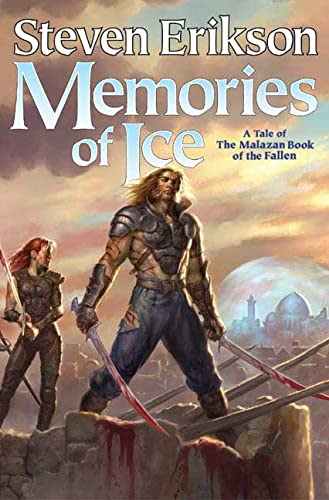 I finally finished Memories of Ice over the weekend. I really enjoyed it, but the book was like running a marathon. I felt tired and exhausted, but found it rewarding. I will be jumping back into House of Chains, but need a break from Malazan so I don’t over exhaust myself.
at 7/11/2007 No comments:

I saw 1408 last weekend and thought it pretty good. I went in with middle-of-the road expectations, so I was pleasantly surprised. I grew up watching John Cusack movies, and I have liked almost everything I've seen with him. This was no exception. I, as anybody who reads this blog knows, like most of Stephen King's work, though I never read the original story which inspired the movie.

One or two spots spooked me, more out of surprise than anything. When did a telephone ringing become such frightening thing in movies, by the way? The movie got a little hokey towards the end, but I enjoyed it. What I particularly liked about the film was some of the ambiguity - the ending seemed as if it was open to viewer interpretation, as did Samuel, "Evil Fucking Room" Jackson's role. I say this mainly because Mrs. Blog O' Stuff and I had different reactions to both, or rather, different interpretations.

So, a good movie, but not one I would judge as a Must Have on DVD.

I am fighting very hard against my urge to see the Transformers movie. I grew up watching the cartoon and had a bunch of the toys, and like most boys my age, loved the movie, which was Orson Welles's last role. I also dislike nearly everything* I've seen from Michael Bay, almost walking out of Armageddon, so I won't be expecting much. Well, The Rock wasn't so bad. Then again, Transformers does seem like a movie that should be seen in theaters and Speilberg has his name attached to it, so that gives me a faint glimmer of hope.

As it is, I will be seeing the next Potter film, part of me wants to see Fantastic Four: Rise of the Silver Surfer, but the film I'm most looking forward to seeing is Stardust. Despite it's crappy title, the trailers of Shoot 'Em Up have me intrigued - to see it when it hits cable.