Old Man's War & the return of the Virus

I finished up John Scalzi's Old Man's War yesterday, which will be the discussion book in SFFWorld's Science Fiction Book Club in May. I really enjoyed the book; it was smartly written, had some unexpected humor and cool SFnal ideas. I'm going to have to buy The Ghost Brigades in my next book haul.

Vellum and a new job 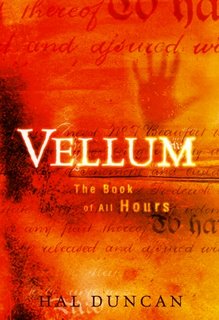 Earlier today, I posted my review of Hal Duncan's audacious debut novel, Vellum. It was a hyped book last year when the Brits published it, and for the most part, it lived up to the expectations.

Friday was the last day at the old job and I start tomorrow at the new place. I've got mixed feelings, of course. I'm both excited and anxious about starting at the new place, I know I've made the right move. On the other hand, I'll miss the people I worked with at the old place; well, most of them anyway. The commute is a bit longer, but the better pay and potential for moving up at the new place very much outweigh the extra three or four miles I'll be driving.
at 4/23/2006 No comments:

I hit a nice little writing milestone this morning – my novel reached 100K! I felt pretty damn good about hitting that number, although I realize quantity doesn’t always equal quality. That’s not to say those 100K plus words are crap, I feel pretty good about most of what I’ve written thus far.

The book started in November as part of my NaNoWriMo experiment, but it was a story idea I’ve had for quite some time. Since November, I’ve been writing and plugging away on a pretty daily basis, between five to seven days a week. One thing I’ve discovered is that the days where I don’t think I’ll have much to write end up being some of the more productive sessions.

So the question remains, now that I’ve hit the 100K mark, where will it end? To be honest and optomistic, I feel I’m coming close to finishing this thing. I didn’t expect it would be quite this long when I started, the tale definitely grew in the telling. This storyline, which I thought I could flesh out in one novel, has grown into what I can now see as a duology, a number of plot points grew as I was writing. I see the end in sight on this book and I’m looking forward to giving it the first once-over when I finish it.

One thing I’ve found to be good background as I write, at least when I’m on the desktop in the “office” at home is the Music Choice channel, specifically the Heavy Metal station/channel. They play probably the best mix of metal available in my area, mainly because the well-known WSOU doesn’t come in too well at my house.

Keeping with the Metal theme, I acquired a couple of really solid albums recently, Trivium’s Ascendancy and Of One Blood from Shadows Fall. I also happened to hear Trivium’s cover of Master of Puppets, which is one of the better cover songs I’ve heard. I’ve heard a lot of good stuff on Music Choice, music I wouldn’t and likely will never hear on any of the local radio stations. I first heard Shadows Fall on Music Choice and have since become a fan of the band and really enjoyed seeing them at Ozzfest last year. I've also been visiting some Heavy Metal Web sites and forums lately (http://www.allmetalforums.com/forums, http://www.thegauntlet.com/forums/, and http://www.metal-rules.com) to find out more about the artists I've been hearing on Music Choice.
at 4/19/2006 No comments:

Yesterday I posted my review of Robert Newcomb's Savage Messiah, which was easily one of the five or ten worst books I’ve read in the past five years and one of the worst books I’ve ever read. The scary thing about this book is that some comments I’ve seen state this book is an improvement over his previous work. If that’s the case, then I cannot understand why people accept such mediocrity.

In good reading news, I finished up V for Vendetta recently, and I only wish I discovered this brilliant SF work earlier. The response the film has been pretty polarize, with people seeming to either love it or hate it. I don’t know that I’ll get the chance to see it in theaters, but I do at least want to see it when it comes to DVD. I picked it up a couple of weeks ago when I stopped by Kevin Smith’s comic shop, which is always a fun place to visit when in downtown Red Bank.

This is my last week at the current job. On the 24th, I’ll be switching companies, where I’ll essentially be doing the same thing, but for better money and a much better opportunity to advance and move up. I don’t know how much blogging I’ll be doing once next week begins.
at 4/18/2006 No comments:

Nine years a row and counting for my two favorite sports franchises - the Devils making the playoffs and the Yankees winning their home opener. Last night’s clinching game for the Devils was very exciting, but they way they’ve been letting leads slip in the third period is a bit worrying as they head into the playoffs. On the other hand, last night’s victory was their 8th in a row, so they just might be the hottest team in the league right now.

Some nice news from Gary and Gabe, I think this will be great for both of them.

I posted my not-so-positive review of The New Wave of Speculative Fiction – The What If Factor edited by Sean Wright.

As much as I was pained during my reading of Savage Messiah, Hal Duncan’s Vellum is having the opposite effect on me. So far, the book is living up to all the hype it received last year when the UK published the book first..

Lastly, via Hornswoggler, battle of the midget Kisses. We all knew it was inevitable.
at 4/12/2006 No comments:

I posted my review of Ian McDonald's River of Gods yesterday. Good, heady stuff here. I look forward to re-reading it. I finished Godslayer by Jacqueline Carey yesterday and really enjoyed it. It has been over a year since I read the first one, Banewreaker, but the story stuck with me so well, the time didn't hurt too much. Still, this one would have benefitted from being a single volume, as Carey originally intended.

On the opposite end of the spectrum, I finished up Newcomb's Savage Messiah a couple of days ago, thank God. Ouch, and double-ouch, my review will be posted next week. I'll be starting up Caitlin Sweet's A Telling of Stars, which is the May book at SFFWorld's Fantasy Book Club and the next book for review, Vellum by Hal Duncan. I'll also probably begin dipping into the Elemental anthology edited by Steve Savile and Alethia Kontis as well. In addition, I picked up a month's worth of backlogged comics yesterday, so I've got plenty of reading to do, although I may pick up the newest Magazine of Fantasy & Science Fiction if I see it at the bookstore. This month's issue has stories by Gene Wolfe, M. Rickert and Matthew Hughes. I've read enjoyed all three writers in the past.

I thought Lost was pretty good on Wednesday night, considering they finally explained why Hurley hasn't trimmed down. As soon as I saw Dave, two films came to mind: A Beautiful Mind and Identity. I'm not completely convinced that the explanation Dave offered isn't true. Time will tell, but at least the show seems to have hit its pace once again.

Another almost paint-by-numbers Smallville, but as with the previous episode, I thought the elements touching upon the seasonal story-arc were stronger than the episode-specific storyline. I really think that's what is keeping me tuning in every week.

Peter David will be scripting the comic-ization of King's Dark Tower. On one hand, I am happy for Peter, and I think he is the right guy for the job. On the other, Marvel has backpeddled a bit from STEPHEN KING IS COMING TO MARVEL to Robin Furth handling some of the chores, to King being the "Executive Editor and Creative Director"of the thing. I can almost guarantee the final product will be what King wants it to be and bringing in a seasoned, proven comic writer of David's high-caliber may be the right way to go. I see this as King admitting he may not be the right person to actually script the book. However, King has penned a decent number of screenplays and I don't imagine there is much of a difference between the two. Then again, many people have seen what happens when King puts on a different creative hat and directs. Regardless, I'll be buying this next year.

Lastly, because I am addicted to Wikipedia, and I love a meme as much as the next blogger/LJer, I pulled this one is from Gabe. If he thought he was scifi, he should check these out. Go to Wikipedia and look up your birth day (excluding the year). List three neat facts, two births and one death in your journal, including the year.

I posted my review of Naomi Novik's His Majesty's Dragon last night, and started Savage Messiah by Robert Newcomb. Based upon the first 80 pages, this will be an interesting read, to put it kindly. But it doesn't bode well when I'm rewriting paragraphs, in my head, as I read them. I also finished up Ian McDonald's River of Gods on Friday. A bit scattered in places, but thought-proviking and very tight in others. My review should be up later in the week.

Lost another good episode, but I think the Locke backstory episodes are always solid, even though in the present of the story I've been annoyed by him lately. The conclusion of the episode was one of the better ones of the entire series.

South Park standard stuff from them, good in spots, but still under the shadow of Darth Chef.

Smallville was its decent formulaic self. I wasn't paying too much attention to the story itself, but the elements for the greater story line of the season were good - particularly the 'return' of Braniac and Lex's continued scheming. This was what, the 87th time Clark and Lana ended their romance?

Dr. Who is still waiting on the TiVO, but I've really enjoyed the first three episodes, hopefully SciFi will bring the older episodes into some kind of viewing rotation.

Sopranos was probably the best episode of the season last night. With Tony talking, concious, and part of the family again, things were back on track. I'll be surprised if Paulie makes it to the end of this season.

The Devils have starting winning again and baseball has officially started, so it is a good time for sports in my life right now.
at 4/03/2006 No comments: