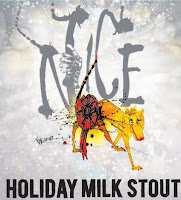 This Holiday Milk Stout is a game changer. Leave this out with plate of cookies and Santa will hook your ass up.


And when Santa squeezes his fat white ass down that chimney tonight, he’s gonna find the jolliest bunch of assholes this side of the nuthouse.


Milk Stouts are one of my favorite types of stouts, the sweetness balances out some of the bitterness inherit in a traditional stout.  The sweetness comes from the lactose sugars, which lends the name Milk Stout, probably because it sounds better than “Lactose Stout.”

On to this beer…I’ve been hit or miss with much of Flying Dog’s output, but more hits lately than misses I have to say.  Like many good milk stouts, this one starts very sweet and smooth with a balanced feel as it settles really nicely into the belly.

Like most stouts, it gets better as it sits and settles closer to room temperature, but I wouldn’t want to drink this too warm.  Some stouts you want to just linger over and sip over the course of a half hour, but this one is smooth enough that having a couple would be nice.

Despite the relatively high ABV for a Milk Stout at 7.2%, I didn’t feel it too much.  I was able to have 2 of these plus another lower ABV beer and not really feel it. However, I imagine after 3 or 4 of these the ABV might catch up with you.

I also appreciated the lack of bitter aftertaste that accompanies some stouts.

All of that said, I’m not sure what makes this one a Holiday Milk Stout. There aren’t any spices like nutmeg or cinnamon most often associated with Holiday/Christmas beers, so I could see this becoming a year round Milk Stout along the lines of a Lancaster Milk Stout.

Overall, a very drinkable Milk Stout and one I can conceivably see myself enjoying multiple bottles over the course of a holiday celebration. Well, I did enjoy two (as well as one other beer) during a Dungeons and Dragons gaming session.

Recommended, link to Untappd where I gave it a 4-star rating.

An Update and Maybe a New Direction

Sure has been a while since I posted here at the old O' stuff.  I'm still posting reviews over at SFFWorld as most folks probably know. I suspect more people know me through twitter now than through this blog.

For quite a while now, I've debated if I want to keep this blog active, officially close it, or try something new.  One of those "new" things I've been pondering is reviewing beer. I've always enjoyed beer, but over the past couple of years I've been really enjoying craft beer. In fact, for my birthday last month, my wife took me on a mini tour of some NJ Micro/Nanobreweries including Twin Elephant Brewing, Conclave Brewing, Kane Brewing, Beach Haus Brewery, and Carton Brewing.

So tomorrow (or later today depending on when you read this) I'll be reviewing beers here at the O' Stuff. Depending on how it feels and what people have to say, I may continue it here or start a whole new blog dedicated just to my beer reviews.
at 12/12/2016 2 comments: