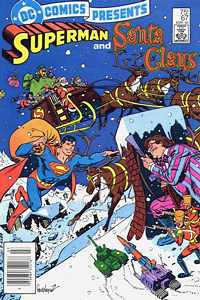 Because when Santa runs into trouble on Christmas Eve, he calls on Superman. This comic is one of my favorites, and has been a part of my collection for many years. I remember picking it up, along with a number of the old DC Comics Presents issues, over the period of a couple years at an old shop the next town over from where I grew up. The shop itself was a bit …interesting. It was an old electronics repair shop, which also sold back issues of many comics. Most of the comics were from the late 70s and early 80s, which considering I was about 10 or 12 in the mid eighties, made sense. I still pull this one out and skim over it. I wish I could go back to that store now and rifle through the boxes of comics, I think the highest priced comics were one dollar. 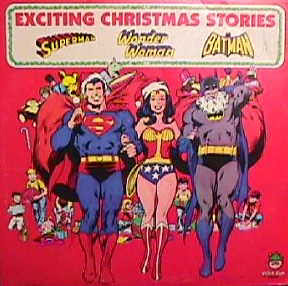 I’ve got this one too. Or at least I did. Over the summer my parents moved into a new house, so I’m not sure if this record made the move with them. I also had some of those old Power rcomics/records, too.

But this picture really begs the question, what is more ridiculous, Superman wearing a Santa hat or Batman wearing a fake Santa’s beard? I’ll go with Bruce in the beard, but let Robin to tell him that. As for Wonder Woman in Santa’s hat, well, that’s a different story.