We’ve got a couple of new reviews at SFFWorld, which happen to be of the same boo. Mark and I both read and reviewed Cold Magic, the first in Kate Elliott’s Spiritwalker trilogy. 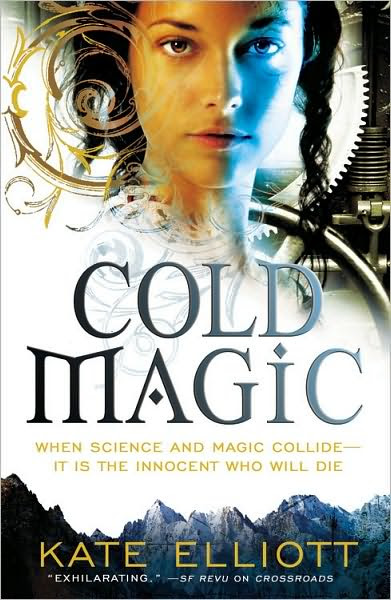 First up is Mark’s review:

After an initial setting up of the characters and their world, things change with rather undue haste. As a coming-of-age novel we find events suddenly alter. As Cat nears her twentieth birthday (her coming of age date), she is summarily married (in a matter of minutes!) as part of an ancient blood pact agreement to Andevai, a member of the Four Moons House, one of a group of Mage Houses who seem to run things.

As you might expect from her previous novels, Kate writes an increasingly engrossing tale with strong (if a little caricaturist) characters and great settings. There’s action and romance, built on solid plot foundations. It’s like a nice warm bath after vigorous exercise on a cold day – you know what to expect, the tale follows logical paths and there are not too many nasty shocks lurking around the corner. Consequently the pages turn nicely.

Now here's part of my review::

Set in a world similar to our own during the 19th Century, magic is real and conflicts with science in many ways, while the world is experiencing something of an ice age. The history of the world is different as well; Rome held its power far longer than in our world and Carthaginian Empire ruled under women, Europe is more fractured with nation-states comprising the majority of the diversity. The magic is infused in this alternate Europe by – Cold Mages – the descendents of Druids Africans who left the Dark Continent for Europe many years previous to the events of the novel. Britain, as a result of the cold temperatures, is locked with North America which is populated by Trolls who ally themselves with the humans who oppose those in power.

One of my primary issues with the novel was the limitations naturally inherit with a first-person novel. That is, the entirety of the story is told through the protagonist’s eyes and voice. At times, this seemed a rather limiting factor in the story Elliott was trying to tell. Cat, for a number of consecutive scenes it seemed, found herself either in the shadows where an plot-important discussion was being held, or she happened to be just outside the door of where another equally important interaction between supporting characters was being held.

In addition, Mark and Pat (he of the Fantasy Hotlist) interviewed Jasper Kent. Guess at Pat’s questions and guess at Mark’s question.
at 9/29/2010