Rouaud's The Path of Anger, Scwab's Vicious, and Wallace's The Wolves of Paris

We've got a few new reviews at SFFWorld this week. Heck, ever since Dag revamped the Web site it  has been something of a hotbed for genre content like reviews and interviews.  One of the ongoing "series" at the site is "Authors review Authors." At the title implies, small press/self published authors pair up and review each other's work.

Aside from those regular updates, Mark, Nila, and I have new reviews.

Over the weekend, Mark posted his review of The Path of Anger by Antoine Rouaud, the first installment of The Book and the Sword: 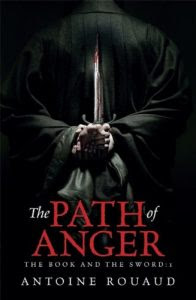 I must admit my first impression was that this debut Fantasy novel was a book catering to the ‘I know-what-I-like’ reader. Admittedly the cover is very cool, but as we’re looking at a world of knights, Emperors and assassins, I was rather concerned that I’d think I’d read it all before.

The world is deliberately medieval-esque. It’s rather like the French Revolution of the 1790’s transposed to a more traditional medieval fantasy world. There is magic here, known as the animus, which people can tap into, although at a physical cost.

The world of Masalia is a world in transition: a place where we look at the formation of a Republic and the collapse of an Empire. It raises interesting questions, in the same way that the Star Wars trilogy does: when the Empire’s ended, the bad guys have been beaten: what happens next? The reader, and the people within this world, may not like all that they see.

Yesterday, I posted a book that will be on my list of best 2013 books. Vicious by V.E. Schwab is her fist novel for the adult market and is one of the best super-hero/super-villain deconstructions stories I've encountered:

Through a non-linear narrative, we learn in the “present” of the novel, Victor has just broken out of prison after serving for 10 years. Initially, his reason for incarceration is not given, but hints leading up to the revelation paint a good picture. The two friends were successful in their attempts to gain super powers, but as a result their friendship is forever fractured.

The first half of the narrative was told mostly from Victor’s point of view, and Eli’s point of view entered into the second half of the narrative, even if it was still mostly from Victor’s POV, with some chapters throughout from the POV of Sarah and Sydney, sisters, one of whom winds up as Victor’s ‘sidekick’ and the other a romantic interest for Eli. Schwab jumped around in time, focusing on the days surrounding the time Eli and Victor conducted their experiments in the hopes of becoming EOs and the days and weeks leading up to their final confrontation. The shortened chapters with intertwined timelines did a fantastic job of building suspense on multiple levels. It seemed a natural way for the story to be told, and I suspect it was one of those tricks that took a great deal of effort to get correct, but felt effortless due to Schwab’s incredible storytelling powers. 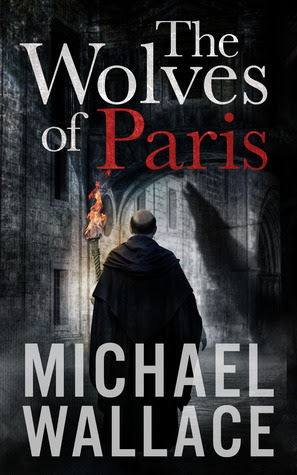 The Wolves of Paris is a short, fun read of murder, mayhem, and werewolves in 15th century Paris. Told primarily through three main characters; two brothers at odds with each other, and the woman they both love; The Wolves of Paris starts out funny. Not laugh-out-loud funny, but pretty darn close.

Two gate guards, an older, half-blind fellow and his younger compatriot, are freezing as night descends over Paris. The two collect tolls but their minds are decidedly in the gutter, awaiting the appearance of Lade d’Lisle’s bottom as she extends it over the Seine to relieve herself.
...
Michael Wallace writes a dashing tale of suspense, religion, intrigue, with a bit of romance thrown in for good measure. He colors his world with quick and accurate descriptions that keep the story moving briskly while filling out the histories and customs of the land. His characters are well-drawn and likeable, and the situations they find themselves in are touched with equal amounts of horror and humor.
at 12/11/2013