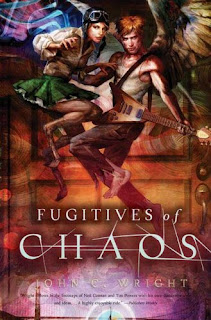 I published a new review to SFFWorld yesterday, John C. Wright’s Orphans of Chaos, which I thought was OK, if a bit frustrating. It felt a bit slow at times, though Wright did put forth some interesting ideas in what was a neat postulation of gods and hard science.

The Gunslinger draws even closer. With less than a month away I’m really excited about seeing Roland's younger days brought to illustrated life. Jae Lee’s art looks great and I have a lot of faith that Peter David can help to deliver a comic King fans will enjoy.

In the matter of a week here in NJ we went from 70 degrees to 29 degrees and it is supposed to be in the 60s this Saturday. I’ve been hearing winds outside my house like I can never remember hearing in my life, this with an extra layer on the house. Mrs. O’ Stuff and I had the house vinyl-sided last year, so I can only imagine what it would sound like without the added

layer & insulation. But our environment is OK, there’s no global warming.

I’ve got two really good beers in the fridge right now. Well, the remnants of two six-packs of beer. Stoudt’s Big Dog Oatmeal Stout and Anchor Porter. Wow, great stuff there. I've had some of Stoudt's beers in the past, and I think even this one. Not sure about Anchor, though I will be having this one again.
Mrs. O’ Stuff likes to surprise me sometimes with the beer and these were both winners. I have to say, I'm a pretty lucky guy.
at 1/10/2007