A ton of stuff this week, mostly February releases from the various Penguin imprints, many of which are book 3 or 4 or higher in an ongoing series where I’ve only read the first book in one of those series. 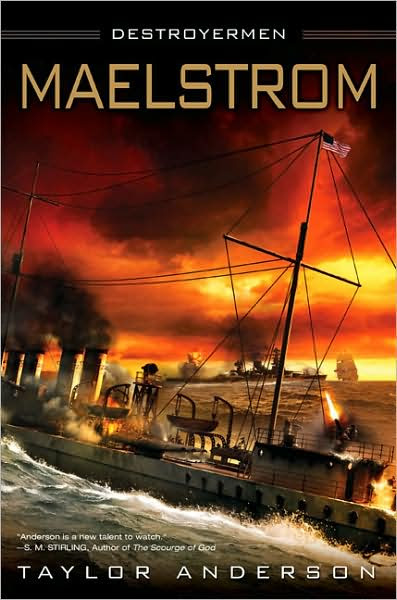 Maelstrom (Destroyermen Book 3) by Taylor Anderson (Roc Hardcover 02/03/2009) – I’ve read the first (Into the Storm and second (Crusade) in the series and enjoyed them so I’ll be sure to read this one, too. The story is interesting and enjoyable: a World War II US Naval Destroyer enters a squall during a losing battle with the Japanese only to emerge in a parallel world where evolution took a different turn: Lemurs and Lizards are the dominant intelligent species and they’ve been warring for many years. The titular Destroyermen fall in with the Lemurs and war continues, with better results for the Lemurs. 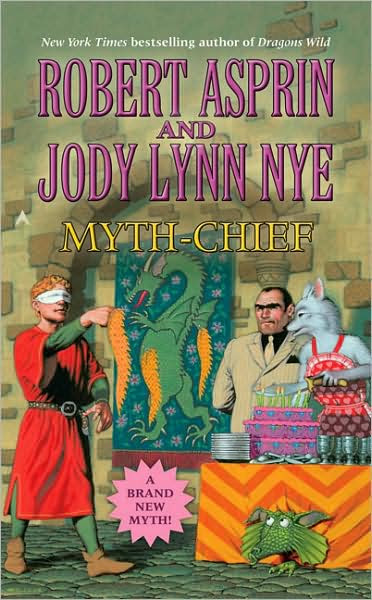 Myth-Chief (Myth Adventure Book 18) by Robert Asprin and Jody Lynn Nye (Ace Mass Market Paperback 02/03/2009) – These comedic fantasies have been around for a long time with 18 installments in the series, I don’t remember a time when these books weren’t on the shelves. Unfortunately, Asprin passed away last year. I haven’t read any of the books.

Skeeve has decided, at long last, to come out of his self-imposed retirement and get back into the problem-solving biz. He confidently expected walk in and take his rightful place as the head of M.Y.T.H., Inc. He didn't expect to have to face off against Aahz for the job. With their friends lending help but showing no favorites, they start a not-so-friendly contest to see who will run the company by taking opposite sides of the next case to walk in the door. Will the legendary partnership survive the battle, or will this be the end of a beautiful friendship? 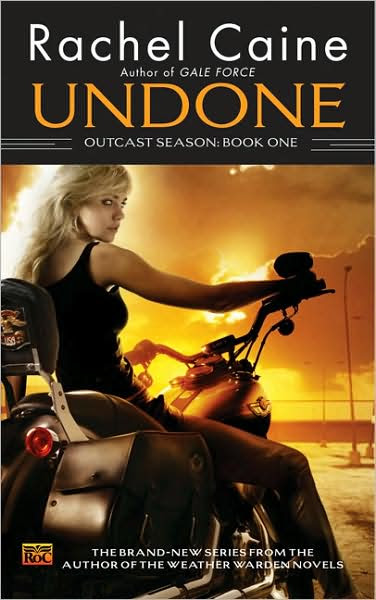 Undone (Outcast Season Book 1) by Rachel Caine (Roc Mass Market Paperback 02/03/2009) – Caine’s written quite a bit in a short amount of time (20 books published in just over 5 years). This is the first of a new series, but from reading the description, it seems to be connected to her popular Weather Warden series

Once she was Cassiel, a Djinn of limitless power. Now, she has been reshaped in human flesh as punishment for defying her master-and living among the Weather Wardens, whose power she must tap into regularly or she will die. And as she copes with the emotions and frailties of her human condition, a malevolent entity threatens her new existence... 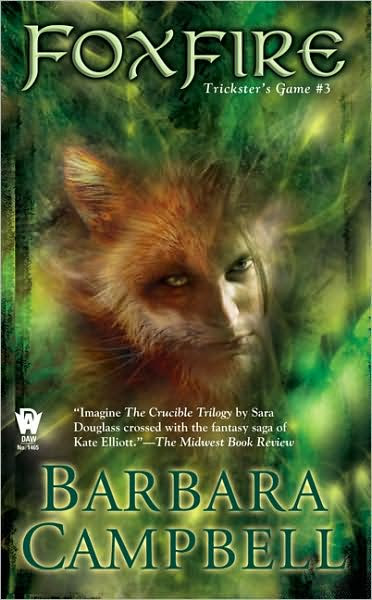 Foxfire (Book Three of Trickster's Game) by Barbara Campbell (Mass Market Paperback 2/03/2009 DAW) – This would be the third book in a trilogy of which I haven’t read the first two books. Looking at her Web site, it seems kind of strange how the cover deisgn/treatment has changed over the course of the trilogy. I wonder if this is an indication that each book can stand well enough on its own. Here’s the blurbage:

Years after their exile, legendary hero Darak and his wife Griane have founded their own tribe and raised four children. A rebel force, led by Darak’s own daughter, seeks to recruit him to their cause. But the greatest danger comes from their youngest son, R igat—actually sired by the Trickster God... 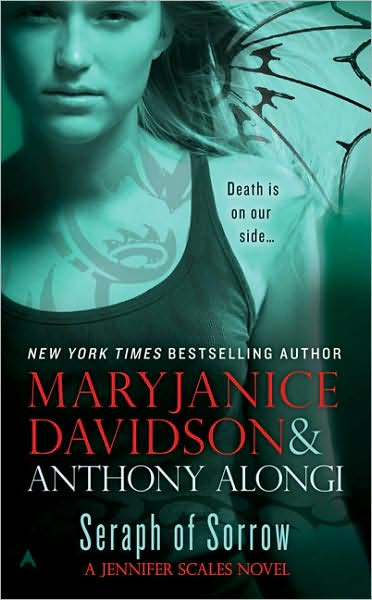 Seraph of Sorrow (Jennifer Scales Book 3) by MaryJanice Davidson and Anthony Alongi (Ace Mass Market Paperback 02/03/2009). The third book in a series that looks to be recently re-packaged from young adult to adult about a girl who is a were-dragon.

Half weredragon. Half beaststalker. All heart.

Slowly coming into her own, Jennifer Scales just may be the bridge to bring the two warring sides of her family together-provided she can survive learning the most ancient skills of dragonkind. 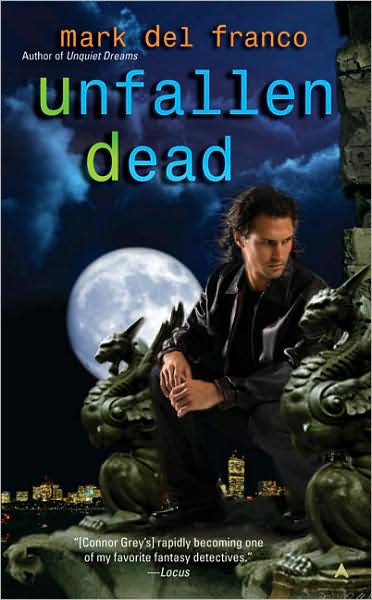 For a century since the Convergence of Faerie and modern reality, the Ways between this world and the next have been closed. But now signs point to the chance that the veil may lift again.

Connor Grey has enough problems with a vengeful Queen of Faerie and the return of his old Guild partner. Add an occult string of murders, and it's another case that just may kill him 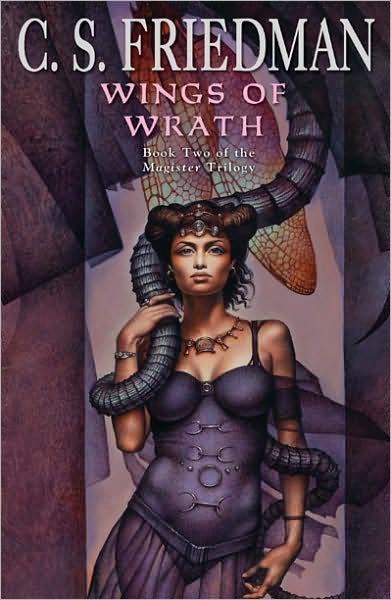 Wings of Wrath (Magister Trilogy Book 2) by C. S. Friedman (DAW Hardcover 2/03/2009)– I read the first (Into the Storm in the trilogy and thought it one of the best I read in 2007, a book that seemed far too overlooked from a writer with such a good reputation. Here’s a brief from my review:
Feast of Souls was an intense novel and provided much food for thought on the sacrifices people make for what they want; what people will do to maintain power; and the potentially-volatile roles of gender. This has been a very good year for fans of Fantasy and Science Fiction – Friedman’s book deserves at least as much attention as some of those “internet darling” writers like Joe Abercrombie, Scott Lynch, and Patrick Rothfuss. 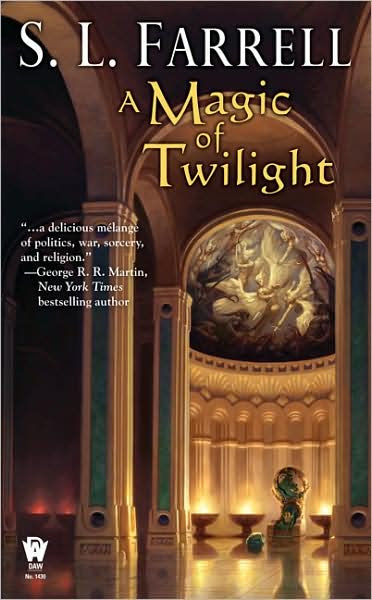 A Magic of Twilight (Book One of The Nessantico Cycle) by S.L. Farrell (Mass Market Paperback 2/03/2009 DAW) – Mark/Hobbit had good things to say when it was published in Hardcover a year ago, so did Pat and Ken/Nethspace, so I may jump into this one, although when I’m not sure. What is even better from my standpoint is that the fine folks at DAW saw fit to send me this (I assume) as a precursor to sending Book 2 b>A Magic of Nightfall which comes out in Hardcover in March.

An intricate tale of murder and magic, deception and betrayal, Machiavellian politics, star-crossed lovers, and a world on the brink of devastating war.... Over the decades and slow centuries, the city of Nessantico spread her influence in all directions. Nessantico gathered to herself all that was intellectual, all that was rich, all that was powerful. There was no city in the known world that could rival her. But there were many who envied her... 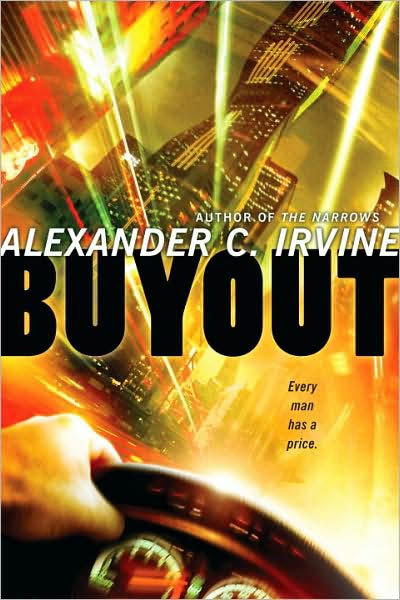 Buyout by Alexander Irvine (Del Rey Trade Paperback 3/31/2009) – I’ve read a few of his books (A Scattering of Jades and One King, One Soldier) so I’m hoping this is just as good.
One hundred years from now, with Americans hooked into an Internet far more expansive and intrusive than today’s, the world has become a seamless market-driven experience. In this culture of capitalism run amok, entrepreneurs and politicians faced with rampant overcrowding in the nation’s penal system turn to a controversial new method of cutting costs: life-term buyouts. In theory, buyouts offer convicted murderers the chance to atone for their crimes by voluntarily allowing themselves to be put to death by the state in exchange for a one-time cash payment, shared among their heirs and victims, based on a percentage of what it would have cost taxpayers to house and feed them for the rest of their natural lives. It’s a win-win situation.

At least that’s what Martin Kindred believes. And Martin is a man who desperately needs something to believe in, especially with his marriage coming apart and the murder of his brother, an L.A. cop brutally gunned down in the line of duty, unsolved.

As the public face of the buyout program, Martin is a lightning rod for verbal and physical abuse–but he embraces every challenge, knowing his motives are pure. But when evidence comes to light that a felon in line for a buyout may have been involved with his brother’s death, Martin’s professional detachment threatens to turn into a personal vendetta that will jeopardize everything–and everyone–he holds dear. Inspired by today’s politics, Buyout is an unforgettable look at an all-too-believable future . . . and one man’s struggle to do the right thing. 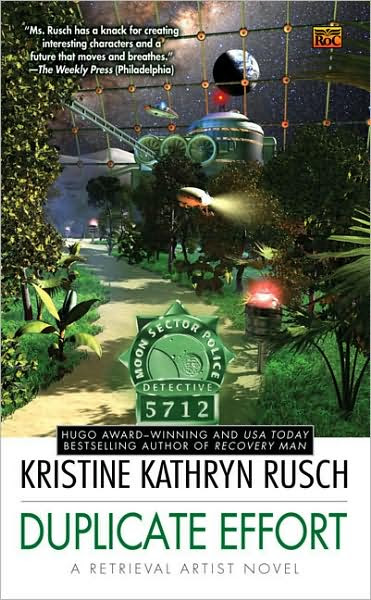 Duplicate Effort (A Retrieval Artist Novel # 3) by Kristine Kathryn Rusch (Roc Mass Market Paperback 02/03/2009) – This one is the 7th in the series about a far future detective which on one hand makes me feel as if this one is a little unapproachable with all the past development and whatnot, but on the other, most of these protagonist driven mystery hybrids are accommodating to new readers.

Retrieval Artist Miles Flint is on a personal mission-to bring down the corrupt law firm of Wagner, Stuart, and Xender. Then a journalist working with him is murdered, and Miles may be next. But before he can begin to investigate, he has a more personal crisis to deal with-his daughter Talia is missing.

Talia-one of six clones of Miles' long-dead child-has gone off to find the other five. As Miles pursues her, he begins to fear that her search for her "sisters" and his for the killer are on a collision course . . .