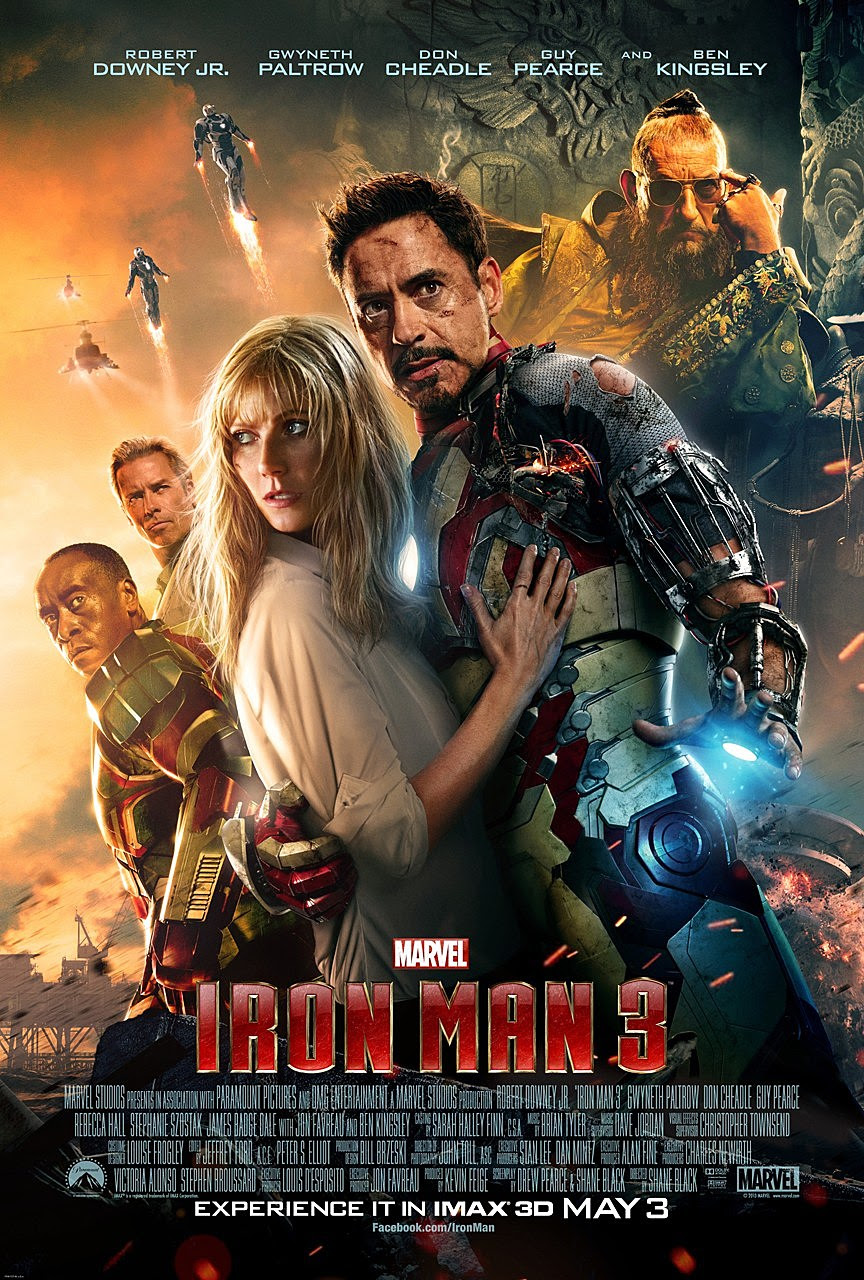 Iron Man 3 is turning out to be one of the biggest movies of all time (as of this writing it is #15 all time box office) so what's the point of a review/reaction almost three weeks after the film's release?  Well, it's a movie that I loved and really stood with me after leaving the theater and I've got this here blog for a reason, right?

The film continues the story of Tony Stark and his role in the world as Iron Man, picking up after the events of The Avengers as a new global threat, The Mandarin, makes great terrorist threats to United States of America. Tony Stark, outside of the suit, is dealing with business competition from Aldrich Killian, a man with science and business as his tools of power, the founder of the Extremis medical advancement and the company, Advanced Idea Mechanics (A.I.M.). Tony is obsessing with making better, more powerful, and versatile suits of armor, armor that is now neurally linked to him and can attach itself to him with voice and mental commands, not sleeping and spending many of his hours in his lab. How he deals with the Mandarin and the Aldrich Killian as both come knocking on his door sets the action for the film. Literally, Killian visits Stark Enterprises and the Mandarin attacks Tony's home after Stark calls him out on live TV - these things are revealed in the trailers so I'm not considering them spoilers.


HOWEVER,WORD OF WARNING IF YOU DON’T WANT TO BE SPOILED –
DO NOT READ THE WIKIPEDIA ENTRY
FOR IRON MAN 3
(I'm not even linking directly to it)

The Mandarin, a villain who is the closest thing to an arch enemy Iron Man has, is finally is revealed in this second sequel. Hinted at in the first film, Ben Kingsley takes center stage as The Mandarin, threatening the world through acts of violence and terror. Many (including my wife and I) despite not being long-time fans, couldn’t understand why a British man was being cast as what was known to be an Asian character (especially a character that in initial appearances played up to racial stereotypes). By film’s end, any qualms we had were erased.

Stark’s other antagonist Killian, was played with great gusto by Guy Pearce (a terrific actor who should be in more movies and more importantly better movies than movies about space prisons) as an initially hobbling, scientist who comes across as a Stark fanboy (he actually reminded me of Buddy Pine, aka Syndrome from The Incredibles) when they first met in 1999, years prior to the film series. Killian eventually develops a solution for healing wounded people like himself, Extremis. The ‘side effects’ allow these individuals to have powers beyond those of mortal men, as a side benefit.

Killian’s #2 is a subject of the Extremis Process, Eric Savin, played by James Badge Dale in another great casting choice. I knew Dale from HBO’s The Pacific but it took a few minutes for me to recognize him here. Shaved head, and slightly different posture really helped to change his appearance and allowed disappear into the role.

Another scientist, Maya Hansen, a one-time romantic fling of Tony’s plays a role similar to Pepper Potts, except Hansen’s boss is Killian. Hansen is a brilliant scientist who is almost on the same level as Stark and Killian and provides as something of a balance between the two.

Returning are Paltrow as Pepper, Paul Bettany as JARVIS, and Don Cheadle as James Rhodes, christened the Iron Patriot in the beginning of the film as a result of Stark’s more global involvement with the Avengers.

The superficial elements of the movie, to put it mildly, worked VERY well. I’ll state right now that Iron Man was never a superhero I followed in the comics to a great extent. I read The Avengers here and there, some of Busiek’s Iron Man work and some of Matt Fraction’s Iron Man work, but Iron Man was never a comic on my pull list in the same way that Captain America, The Flash and Batman have been. In short, I don’t have as an emotional attachment to the mythos and characters as long time readers of ol’ Shell head do.

A.I.M. is a long-time supervillain outfit has been pestering many heroes in the Marvel Universe including Iron Man on many occasions. The Extremis storyline (including the characters of Maya Hansen and Killian) comes from one of the most popular and well-received Iron Man storylines of all time by Warren Ellis and Adi Granov.* As stated, The Mandarin is one Iron Man’s most visible and long-standing enemies. Working with these familiar elements and characters from the Iron Man mythos naturally, entails a great deal of baggage and expectations. By playing with the familiar elements and maneuvering them from 50+ years of comic book history into a two hour film, Shane Black and Drew Pearce wove a very strong story that keyed in on those important elements in the hero’s mythology.

For me, the element of the story that came across as perhaps the strength of the movie was the manner in which Shane Black’s script dealt with Post Traumatic Stress Disorder PTSD. Tony Stark, after being in a war with gods and aliens and shoving something into a black-hole and nearly dying in The Avengers, not surprisingly has a lot on his mind … and it wasn’t like he was smoothly sailing before the events of The Avengers, having fought off a corporate takeover, a larger version of himself (Iron Monger), a mad Russian with his own technological weapon hell bent on familial revenge.

PTSD is a real thing and something with which many military veterans must cope, or anybody who has suffered through severely anguishing circumstances. Sure Batman’s whole MO is that he is reacting to witnessing his parent’s murder at a very young age, but PTSD is not something discussed in the Batman films (and very much to a lesser extent in the comics). Even *if* some other comic books/superhero tales have dealt with PTSD (and I don’t doubt that it has been done), the fact that it is an integral element in one of the biggest films (i.e. a metric fuck-ton of people have and/or will see the film), is a great thing and smartly plays on the idea of stress and coping. It touches on some of the same things as does the Demon in Bottle storyline but puts a slightly different face on it.

Couple the smart script (maybe one of the smarter superhero scripts, IMHO) with some great action pieces (any time the armor flies around and attaches itself the characters, the final action sequence involving many of the Iron Man suits of armor Tony developed which was hinted in the trailers, Stark doing his best James Bond/Bluto Blutarsky mash up trying to get to the Mandarin) and calling Iron Man 3 anything but a success would be false. Sure the film takes a step back, in terms of scope from at the least The Avengers and maybe even the second Iron Man film, but this film was more intimate and I think more successful because of that. This one also had some solid banter/dialogue between Stark and Rhodes, but the two films prior to this one did too as did Black’s most famous script Lethal Weapon, so that shouldn't be a surprise.  Dashes of humor balanced the action really well, too.  The script also managed to insert a plucky young 'sidekick/apprentice/helper' for Stark in the middle of the film that wait for it...the kid was not annoying and came across pretty well.

I'll finish the review with this, for me, Iron Man 3 is in the top 5 super hero/comic book movies I've ever seen.

* Quite frankly, Ellis’s fingerprints are all over all three of the Iron Man films so I would like to think the fine folks at Marvel are rewarding him handsomely.
at 5/20/2013

I can't believe the Wikipedia page is *so* spoilerific. That's insanity.

I liked IM3 much more than IM2. Not sure its better than IM1 or the Avengers, though.

No, I wouldn't put it above THE AVENGERS, but I for me because it wasn't hampered by having to be an origin story, I notch it above IM1. I'm not even counting DARK KNIGHT in the discussion since that film transcends just about any genre categorization for me.