New arrivals this include titles from Jo Fletcher Books’s launch into the US market, as well as a couple of books from the fine folks at Tor.

Mage’s Blood (The Moontide Quartet #1) by David Hair (Jo Fletcher Books Hardcover 09/03/2013) – Hair’s doorstopper first appeared through Jo Fletcher’s UK imprint last year and is poised to be the launch title for the imprint’s entry into the US market. Smart move as this book received some good reviews.

For years the Leviathan Bridge was a boon for prosperity and culture. But when the Rondian Emperor turned his avaricious eyes toward it, peace became war. In successive crusades the Imperial legions and their mighty battle-mages plundered the East unopposed.

Now the Moontide has come again, the Bridge is rising from beneath the waves, and the Third Crusade is poised for release. The board is set and the pieces are moving. But three lowly pawns, barely regarded, threaten the game: A failed mage, a jaded mercenary and a lowly market-girl are about to be catapulted into the maelstrom. Their choices and their courage are about to change the world.

Come to Urte, where the moon covers half the sky and the tides render the seas impassable. Where windships ply the skies and magi with god-gifted powers rule the earth. Where East and West are divided by colour, creed, language and the sea, but drawn to each other irrevocably in a dance of life and death. The Moontide is coming, to sweep away all in its path.

A Cold Season by Alison Littlewood (Jo Fletcher Books Hardcover 09/24/2013) – This is one of the first Jo Fletcher books to be published in the US and Littlewood’s debut.

A dark and disturbing tale from a bold new voice in horror writing: After the battlefront death of her husband, a soldier, in the sands of the Middle East, a distraught Cass decides to move to the bucolic, picture-perfect village of Darnshaw with her teenaged son. Since Cass’s website design business can be run from anywhere with an internet connection and Ben could benefit from a change of scenery, a move to the highlands village seems like just the thing.

But the locals aren’t as friendly as she had hoped and the internet connection isn’t as reliable as her business requires. And when Ben begins to display a hostility that is completely unlike his usual gentle nature, Cass begins to despair. Finally, the blizzards thunder through and Darnshaw is marooned in a sea of snow.

When things look their blackest, she finds one sympathetic ear in the person of her son’s substitute teacher. But his attentions can’t put to rest her growing anxiety about her son and her business. And soon, she finds herself pitted against dark forces she can barely comprehend. The cold season has begun.

Assault on Sunrise by Michael Shea (Tor, Hardcover 08/13/2013) – No where does the book or promo material indicated this is the second book of a trilogy, but it actually is. It is the follow-up to Shea’s 2010 novel The Extra.

Less than a hundred years in the future, pollution, economic disaster, and the rapacious greed of the corporate oligarchy has brought America to its knees and created dystopian urban nightmares, of which L.A. may be the worst.

Curtis, Japh, and Jool are film extras, who—with the help of a couple of very gutsy women—survived being anonymous players in a “live-action” film in which getting killed on-screen meant getting killed for real. Surviving the shoot made them rich enough to escape the post-apocalyptic Hell that L.A. has become. But their survival was not what Panoply Studios’ CEO Val Margolian had in mind, especially since it cost his company millions.

Now he's taking his revenge. After several plainclothes police are found dead in the former extras' new home, the bucolic, peaceful town of Sunrise, California, the entire town is subjected to Margolian's invidious plan to punish the entire town…and make a fortune doing it. Margolian has created toxic, murderous wasp-like mechanical creatures to set upon the people of Sunrise, while his film crew captures the carnage in what promises to be the bloodiest “live-action” film yet. With their haven from L.A. besieged by the deadly assault, the former extras—and their fellow townspeople—are faced with a grim task: to defeat the creatures and take back their town and their freedom. Michael Shea's Assault on Sunrise is a saga of courage and sacrifice in a world gone mad. 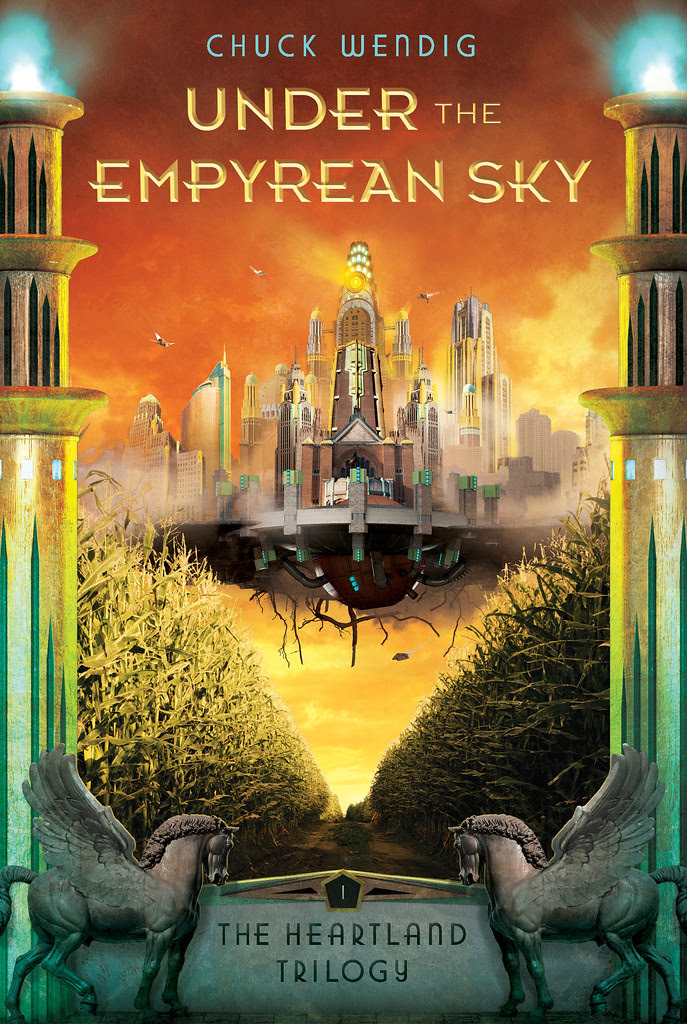 Under an Empyrean Sky (Book 1 of The Heartland Trilogy) by Chuck Wendig (Skyscape Mass Market Paperback 07/30/2013) – Chuck ventures into Young Adult territory with this novel, the first of a fantasy trilogy.

Corn is king in the Heartland, and Cael McAvoy has had enough of it. It’s the only crop the Empyrean government allows the people of the Heartland to grow—and the genetically modified strain is so aggressive that it takes everything the Heartlanders have just to control it. As captain of the Big Sky Scavengers, Cael and his crew sail their rickety ship over the corn day after day, scavenging for valuables. But Cael’s tired of surviving life on the ground while the Empyrean elite drift by above in their extravagant sky flotillas. He’s sick of the mayor’s son besting Cael’s crew in the scavenging game. And he’s worried about losing Gwennie—his first mate and the love of his life—forever when their government-chosen spouses are revealed. But most of all, Cael is angry—angry that their lot in life will never get better and that his father doesn’t seem upset about any of it.

Robert the Bruce (A Tale of the Guardians) by Jack Whyte (Tor Hardcover 04/02/2013) – The second novel in Whyte's series chronicling the life of the greatest heroes of Scottish history.

From author Jack Whyte comes the true story of Robert the Bruce: a passionate man. An incredible warrior. And one of Scotland’s finest.

Robert I, or as he is known to a grateful Scottish nation, Robert the Bruce, was one of Scotland’s greatest kings, as well as one of the most famous warriors of his generation. He spearheaded the valiant Scots in their quest for freedom, leading his people during the Wars of Scottish Independence against the Kingdom of England during the middle ages. His reign saw the recognition of Scotland as an independent nation, and today Bruce is remembered in Scotland as a national hero.

It was by no means a fair and easy road for this indomitable fighter. As a young man he saw the English king Edward I award the vacant Crown of Scotland to John Balliol. The nation quickly splintered into factions and this spurred Robert and his father to at first side with Edward and then against John, whom many of the nobles did not feel was the correct person to guide the nation. Thus began a decades-long path for Scottish freedom. To achieve this goal, Robert sometimes had to delicately balance the power of the nobles against the might of the English. He was a tireless campaigner and after a full life of battle and diplomacy, in May 1328, King Edward III signed the Treaty of Edinburgh-Northampton, which recognized Scotland as an independent kingdom and Bruce as its king.