A larger than what has been normal batch of arrivals here at the o' Stuff. Mainly, Orbit's November/December releases. 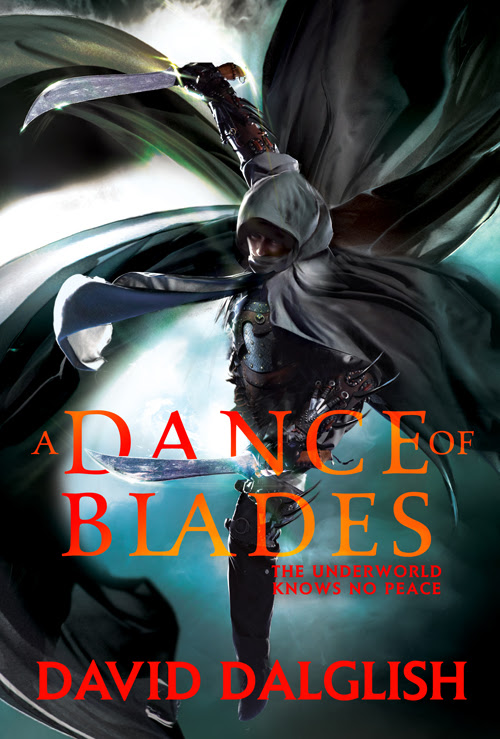 A Dance of Blades (Volume 2 of Shadowdance) by David Dalglish (Orbit, Trade Paperback 11/05/2013) – Orbit really knows what they are doing in publishing series book, ensuring the quick succession of their publishing. This is the second installment of Dalglish’s self-published series.

It's been five long years since the city learned to fear...

The war between the thief guilds and the powerful allegiance known as the Trifect has slowly dwindled. Now only the mysterious Haern is left to wage his private battle against the guilds in the guise of the Watcher - a vicious killer who knows no limits. But when the son of Alyssa Gemcroft, one of the three leaders of the Trifect, is believed murdered, the slaughter begins anew. Mercenaries flood the streets with one goal in mind: find and kill the Watcher.

Peace or destruction; every war must have its end.

Fantasy author David Dalglish spins a tale of retribution and darkness, and an underworld reaching for ultimate power. The world is broken...

Corban wants nothing more than to be a warrior under King Brenin's rule - to protect and serve. But that day will come all too soon. And the price he pays will be in blood.

Evnis has sacrificed - too much it seems. But what he wants - the power to rule -- will soon be in his grasp. And nothing will stop him once he has started on his path.

Veradis is the newest member of the warband for the High Prince, Nathair. He is one of the most skilled swordsman to come out of his homeland, yet he is always under the shadow of his older brother.

Nathair has ideas - and a lot of plans. Many of them don't involve his father, the High King Aquilus. Nor does he agree with his father's idea to summon his fellow kings to council.

The Banished Lands has a violent past where armies of men and giants clashed in battle, but now giants are seen, the stones weep blood and giant wyrms are stirring. Those who can still read the signs see a threat far greater than the ancient wars. For if the Black Sun gains ascendancy, mankind's hopes and dreams will fall to dust...

...and it can never be made whole again.


MALICE is a dark epic fantasy tale of blind greed, ambition, and betrayal. Last to Rise (Rojan Dizon Book Three) by Francis Knight (Orbit Trade Paperback 11/26/2013) – Third in the sequence with began with to Knight’s interesting debut novel Fade to Black, which I read and enjoyed earlier in the year.

The towering vertical city of Mahala is on the brink of war with its neighboring countries. It might be his worst nightmare, but Rojan and the few remaining pain mages have been drafted in to help.

The city needs power in whatever form they can get it -- and fast. With alchemists readying a prototype electricity generator, and factories producing guns faster than ever, the city's best advantage is still the mages. Tapping their power is a risky plan, but with food in the city running out, and a battle brimming that no one is ready for, risky is the best they've got...

The spectacular conclusion to the adventures of Rojan Dizon, which began with the thrilling fantasy debut Fade to Black.

Dangerous Women edited by George R.R. Martin and Gardner Dozois (Tor, Hardcover 12/03/2013) – This is the second themed anthology from this power-house duo on the shelves this year. I read (and enjoyed) Old Mars from them and this one has a very impressive line-up including a number of my favorite writers including Joe Abercrombie, Jim Butcher, and George R.R. Martin. This thing is huge, a dead raccoon was under the package containing the book; I only noticed the raccoon after moving the package.

All new and original to this volume, the 21 stories in Dangerous Women include work by twelve New York Times bestsellers, and seven stories set in the authors’ bestselling continuities—including a new “Outlander” story by Diana Gabaldon, a tale of Harry Dresden’s world by Jim Butcher, a story from Lev Grossman set in the world of The Magicians, and a 35,000-word novella by George R. R. Martin about the Dance of the Dragons, the vast civil war that tore Westeros apart nearly two centuries before the events of A Game of Thrones.

Writes Gardner Dozois in his Introduction, “Here you’ll find no hapless victims who stand by whimpering in dread while the male hero fights the monster or clashes swords with the villain, and if you want to tie these women to the railroad tracks, you’ll find you have a real fight on your hands. Instead, you will find sword-wielding women warriors, intrepid women fighter pilots and far-ranging spacewomen, deadly female serial killers, formidable female superheroes, sly and seductive femmes fatale, female wizards, hard-living Bad Girls, female bandits and rebels, embattled survivors in Post-Apocalyptic futures, female Private Investigators, stern female hanging judges, haughty queens who rule nations and whose jealousies and ambitions send thousands to grisly deaths, daring dragonriders, and many more.”
at 11/24/2013