Only three books this week, but I’m not complaining.

Tin Men by Christopher Golden (Ballantine Hardcover, 06/23/2015) – Much of Golden’s oeuvre lies in the darker, fantastic realms of Speculative Fiction. This one is a slight directional change into a Military SF/Apocalyptic tale. I’ve read a book or two by him and I’ve always wanted to go back and read more.

Brad Thor meets Avatar in this timely military thriller for the drone age, which spins the troubles of today into the apocalypse of tomorrow. A rocket ride of a read packed with high action, cutting-edge technology, and global politics, Tin Men begins with the end of the world as we know it and takes off from there.

The Border by Robert R. McCammon (Subterranean Press 05/31/2015) – When I was cutting my reading teeth on the speculative fiction genres, I devoured a decent amount of Horror. At the time, from the mid 80s to early 90s, Robert R. McCammon was churning out terrific novel after terrific novel, including the landmark Swan’s Song as well as my favorite werewolf novel of all time The Wolf’s Hour. The Border, as the blurb below notes, is his big return to big awe-inspiring horror.

I called out this book in a “On My Radar” post for SF Signal and John DeNardo messaged me the day I submitted the post that the book arrived at his house so he sent it out to me. I’ll be posting a review of this to SF Signal closer to publication day.

World Fantasy award-winning, bestselling author Robert McCammon makes a triumphant return to the epic horror and apocalyptic tone reminiscent of his books ''Swan Song'' and ''Stinger'' in this gripping new novel, ''The Border'', a saga of an Earth devastated by a war between two marauding alien civilizations.

But it is not just the living ships of the monstrous Gorgons or the motion-blurred shock troops of the armored Cyphers that endanger the holdouts in the human bastion of Panther Ridge. The world itself has turned against the handful of survivors, as one by one they succumb to despair and suicide or, even worse, are transformed by otherworldly pollution into hideous Gray Men, cannibalistic mutants driven by insatiable hunger. Into these desperate circumstances comes an amnesiac teenaged boy who names himself Ethan--a boy who must overcome mistrust and suspicion to master unknowable powers that may prove to be the last hope for humanity's salvation. Those same powers make Ethan a threat to the warring aliens, long used to fearing only each other, and thrust him and his comrades into ever more perilous circumstances.

A major new novel from the unparalleled imagination of Robert McCammon, this dark epic of survival will both thrill readers and make them fall in love with his work all over again. 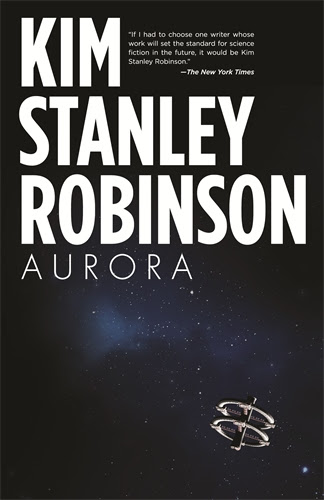 Aurora by Kim Stanley Robinson (Orbit Books 05/05/2015) – I have made multiple attempts at reading novels by KSR and I’ve never been able to connect with them, but I think I’m in the minority since many other genre readers seem to enjoy his work. This is a long departure for him, in that the story leaves our immediate solar system.


A major new novel from one of science fiction's most powerful voices, AURORA tells the incredible story of our first voyage beyond the solar system.

Brilliantly imagined and beautifully told, it is the work of a writer at the height of his powers.
Our voyage from Earth began generations ago.

Now, we approach our destination.