Quite a few releases from the folks at the Flat-Iron Building this past week. 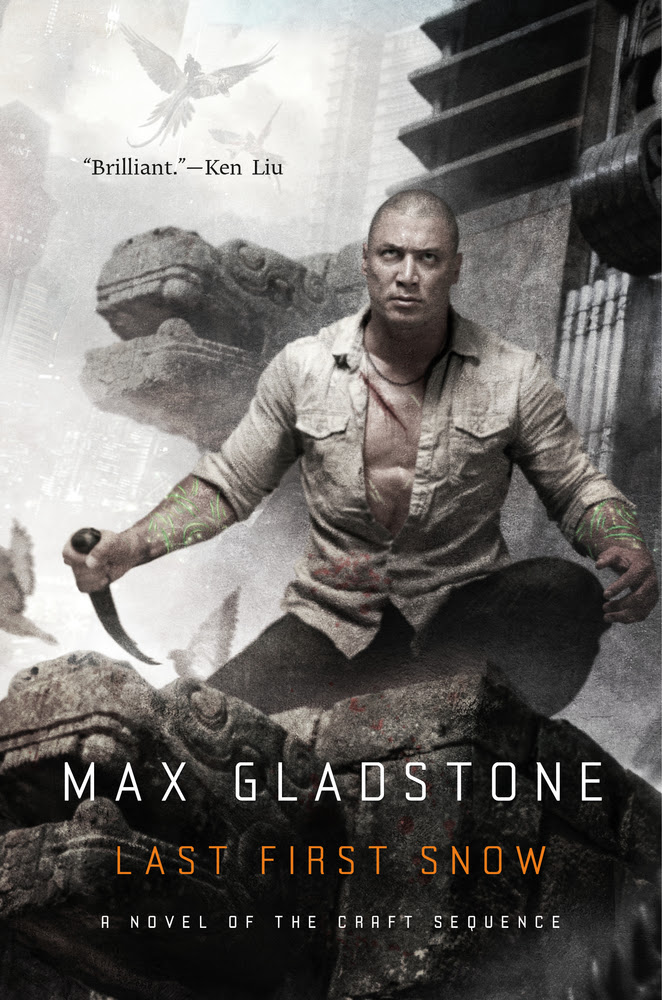 Last First Snow (Craft Sequence #4) by Max Gladstone (Tor Trade Paperback 07/14/2015) – Final version of the ARC I received back in March, my review is up here: http://www.sffworld.com/2015/07/last-first-snow-by-max-gladstone/ Fourth published novel in Max’s wonderful sequence, but the first chronologically. I’m a bit of a late-arriver to this series, but since this is the chronological first I’ll be jumping into this one. Just as great as Max’s fiction are his non-fiction essays ramblings. Dude is very smart and cool. (That guy on the cover looks like a morphing of Yul Brenner, Dave Bautista, and The Rock on the cover, which makes for a very intimidating dude.)

Forty years after the God Wars, Dresediel Lex bears the scars of liberation—especially in the Skittersill, a poor district still bound by the fallen gods' decaying edicts. As long as the gods' wards last, they strangle development; when they fail, demons will be loosed upon the city. The King in Red hires Elayne Kevarian of the Craft firm Kelethres, Albrecht, and Ao to fix the wards, but the Skittersill's people have their own ideas. A protest rises against Elayne's work, led by Temoc, a warrior-priest turned community organizer who wants to build a peaceful future for his city, his wife, and his young son.

As Elayne drags Temoc and the King in Red to the bargaining table, old wounds reopen, old gods stir in their graves, civil blood breaks to new mutiny, and profiteers circle in the desert sky. Elayne and Temoc must fight conspiracy, dark magic, and their own demons to save the peace—or failing that, to save as many people as they can. 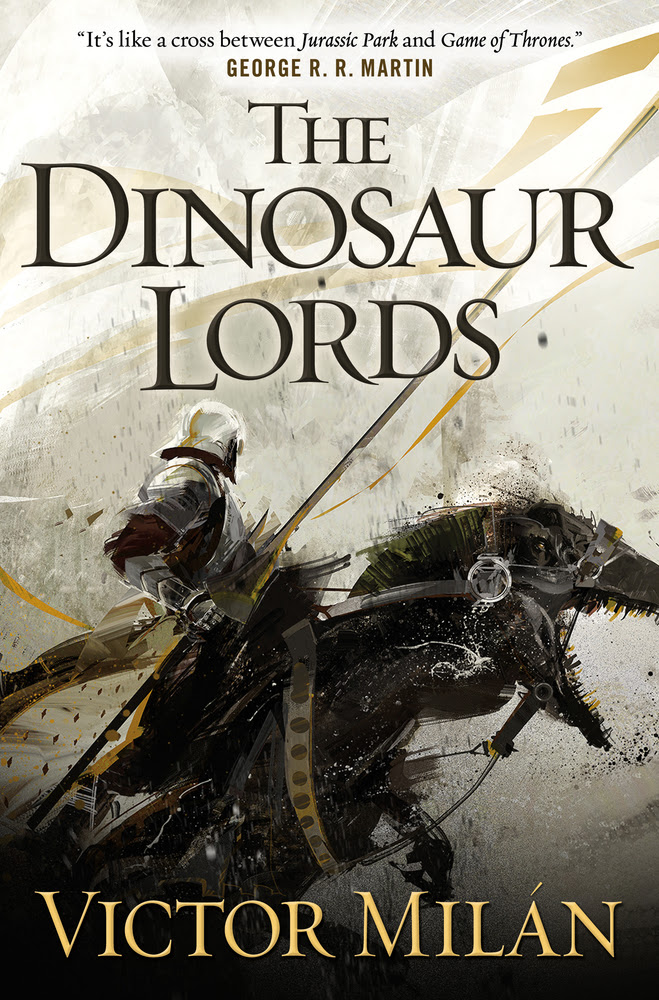 "It's like a cross between Jurassic Park and Game of Thrones." --George R. R. Martin

A world made by the Eight Creators on which to play out their games of passion and power, Paradise is a sprawling, diverse, often brutal place. Men and women live on Paradise as do dogs, cats, ferrets, goats, and horses. But dinosaurs predominate: wildlife, monsters, beasts of burden-and of war. Colossal plant-eaters like Brachiosaurus; terrifying meat-eaters like Allosaurus, and the most feared of all, Tyrannosaurus rex. Giant lizards swim warm seas. Birds (some with teeth) share the sky with flying reptiles that range in size from bat-sized insectivores to majestic and deadly Dragons.

Thus we are plunged into Victor Milán's splendidly weird world of The Dinosaur Lords, a place that for all purposes mirrors 14th century Europe with its dynastic rivalries, religious wars, and byzantine politics…except the weapons of choice are dinosaurs. Where vast armies of dinosaur-mounted knights engage in battle. During the course of one of these epic battles, the enigmatic mercenary Dinosaur Lord Karyl Bogomirsky is defeated through betrayal and left for dead. He wakes, naked, wounded, partially amnesiac-and hunted. And embarks upon a journey that will shake his world. 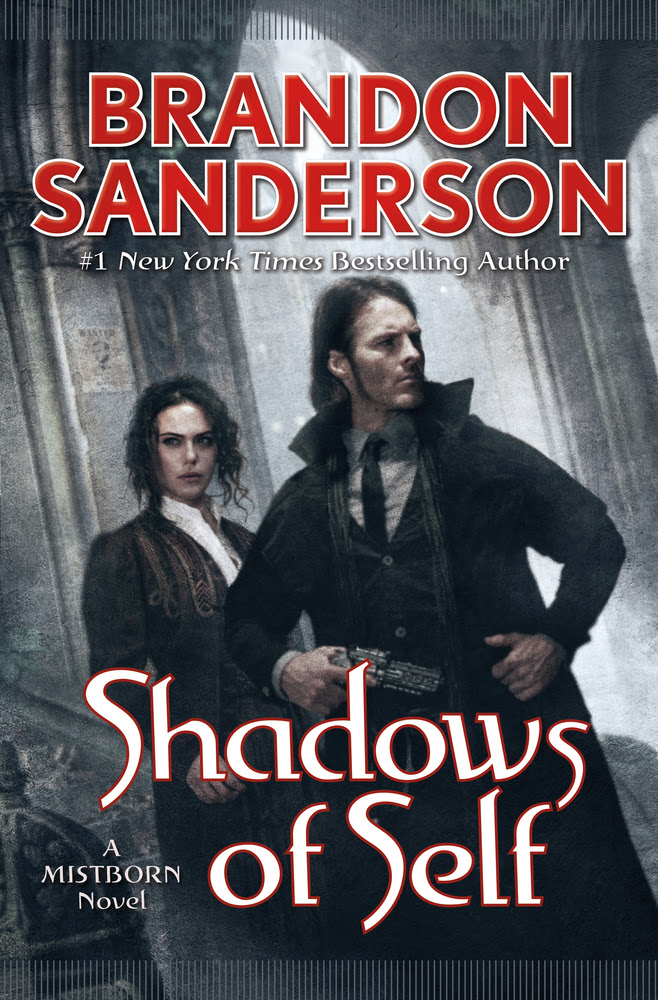 Shadows of Self (A Mistborn Novel) by Brandon Sanderson (Tor, Hardcover 10/08/2015) – While I enjoyed the last Mistborn novel, I hope this one has a little more meat to it.

The #1 New York Times bestselling author returns to the world of Mistborn with his first novel in the series since The Alloy of Law.

With The Alloy of Law, Brandon Sanderson surprised readers with a New York Times bestselling spinoff of his Mistborn books, set after the action of the trilogy, in a period corresponding to late 19th-century America.

The trilogy's heroes are now figures of myth and legend, even objects of religious veneration. They are succeeded by wonderful new characters, chief among them Waxillium Ladrian, known as Wax, hereditary Lord of House Ladrian but also, until recently, a lawman in the ungoverned frontier region known as the Roughs. There he worked with his eccentric but effective buddy, Wayne. They are "twinborn," meaning they are able to use both Allomantic and Feruchemical magic.

Shadows of Self shows Mistborn's society evolving as technology and magic mix, the economy grows, democracy contends with corruption, and religion becomes a growing cultural force, with four faiths competing for converts.

This bustling, optimistic, but still shaky society now faces its first instance of terrorism, crimes intended to stir up labor strife and religious conflict. Wax and Wayne, assisted by the lovely, brilliant Marasi, must unravel the conspiracy before civil strife stops Scadrial's progress in its tracks.

Shadows of Self will give fans of The Alloy of Law everything they've been hoping for and, this being a Brandon Sanderson book, more, much more. 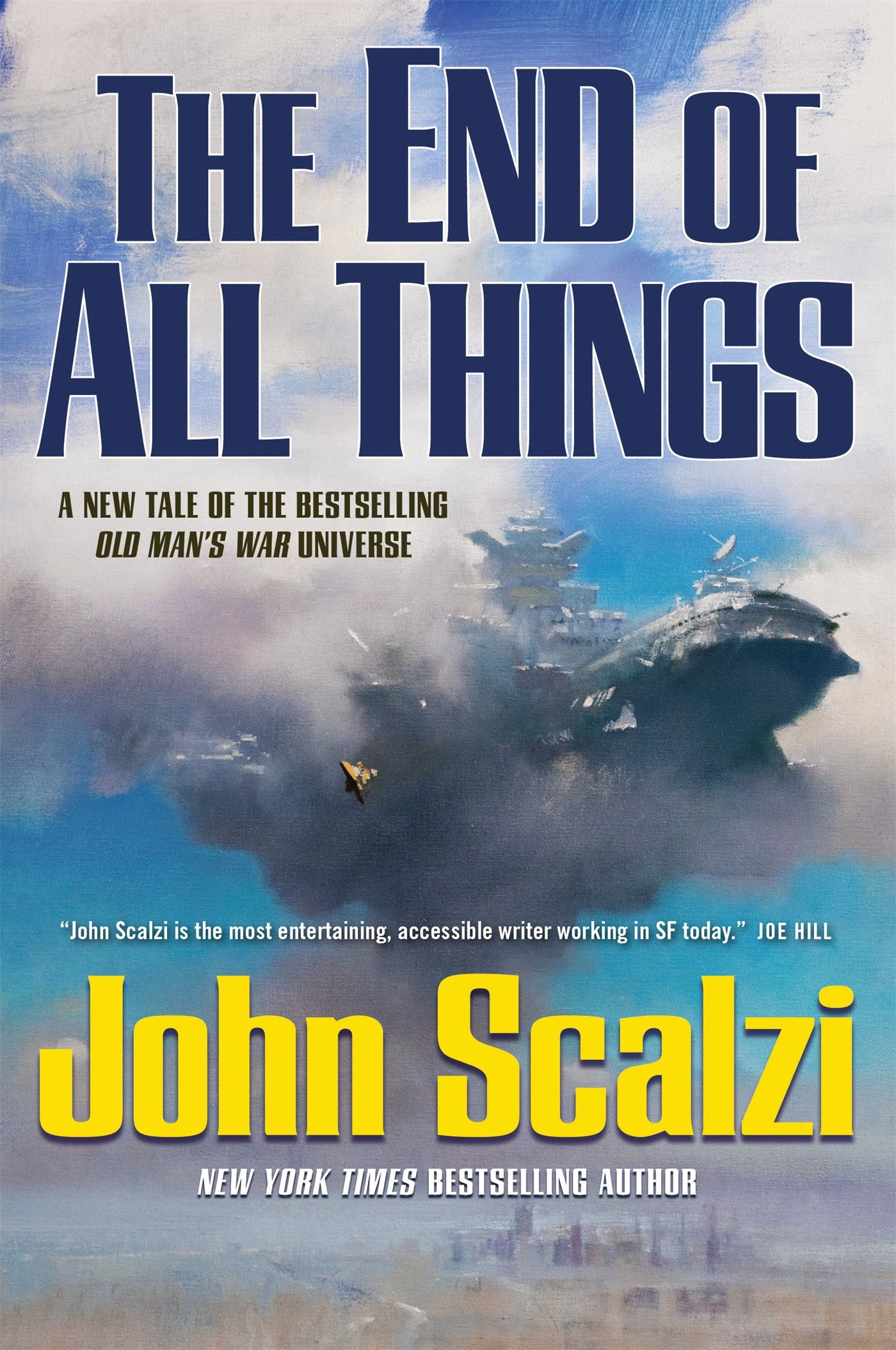 The End of All Things (An Old Man’s War novel) by John Scalzi (Tor Hardcover 08/11/2015) – As Tor and Scalzi did for The Human Division this one was released in an episodes on Tor.com prior to the novel’s release.


Hugo-award winning author, John Scalzi returns to his best-selling Old Man's War universe with The End of All Things, the direct sequel to 2013's The Human Division
Humans expanded into space...only to find a universe populated with multiple alien species bent on their destruction. Thus was the Colonial Union formed, to help protect us from a hostile universe. The Colonial Union used the Earth and its excess population for colonists and soldiers. It was a good arrangement...for the Colonial Union. Then the Earth said: no more.

Now the Colonial Union is living on borrowed time-a couple of decades at most, before the ranks of the Colonial Defense Forces are depleted and the struggling human colonies are vulnerable to the alien species who have been waiting for the first sign of weakness, to drive humanity to ruin. And there's another problem: A group, lurking in the darkness of space, playing human and alien against each other-and against their own kind -for their own unknown reasons.

In this collapsing universe, CDF Lieutenant Harry Wilson and the Colonial Union diplomats he works with race against the clock to discover who is behind attacks on the Union and on alien races, to seek peace with a suspicious, angry Earth, and keep humanity's union intact...or else risk oblivion, and extinction-and the end of all things. 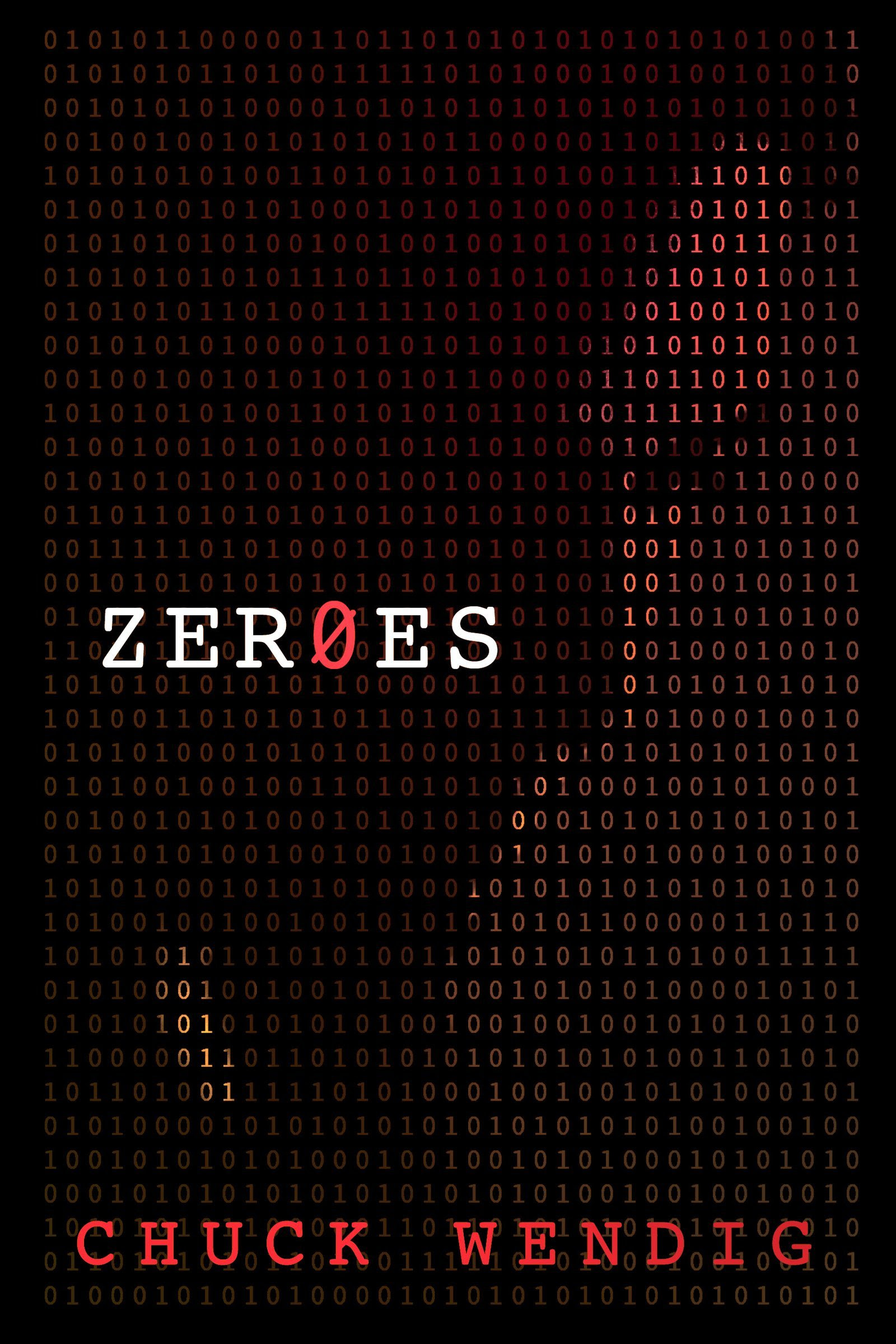 Zer0es by Chuck Wendig (Harper Voyager 08/18/2015) – Chuck is one of the smartest, hardest working writers in SFF and this is his first Hardcover (exclusive) novel. This is the lovely, final hardcover version of the ARC I received a few months ago.


An exhilarating thrill-ride through the underbelly of cyber espionage in the vein of David Ignatius’s The Director and the television series Leverage, CSI: Cyber, and Person of Interest, which follows five iconoclastic hackers who are coerced into serving the U.S. government.

An Anonymous-style rabble rouser, an Arab spring hactivist, a black-hat hacker, an old-school cipherpunk, and an online troll are each offered a choice: go to prison or help protect the United States, putting their brains and skills to work for the government for one year.

But being a white-hat doesn’t always mean you work for the good guys. The would-be cyberspies discover that behind the scenes lurks a sinister NSA program, an artificial intelligence code-named Typhon, that has origins and an evolution both dangerous and disturbing. And if it’s not brought down, will soon be uncontrollable.

Can the hackers escape their federal watchers and confront Typhon and its mysterious creator? And what does the government really want them to do? If they decide to turn the tables, will their own secrets be exposed—and their lives erased like lines of bad code?

Combining the scientific-based, propulsive narrative style of Michael Crichton with the eerie atmosphere and conspiracy themes of The X-Files and the imaginative, speculative edge of Neal Stephenson and William Gibson, Zer0es explores our deep-seated fears about government surveillance and hacking in an inventive fast-paced novel sure to earn Chuck Wendig the widespread acclaim he deserves. 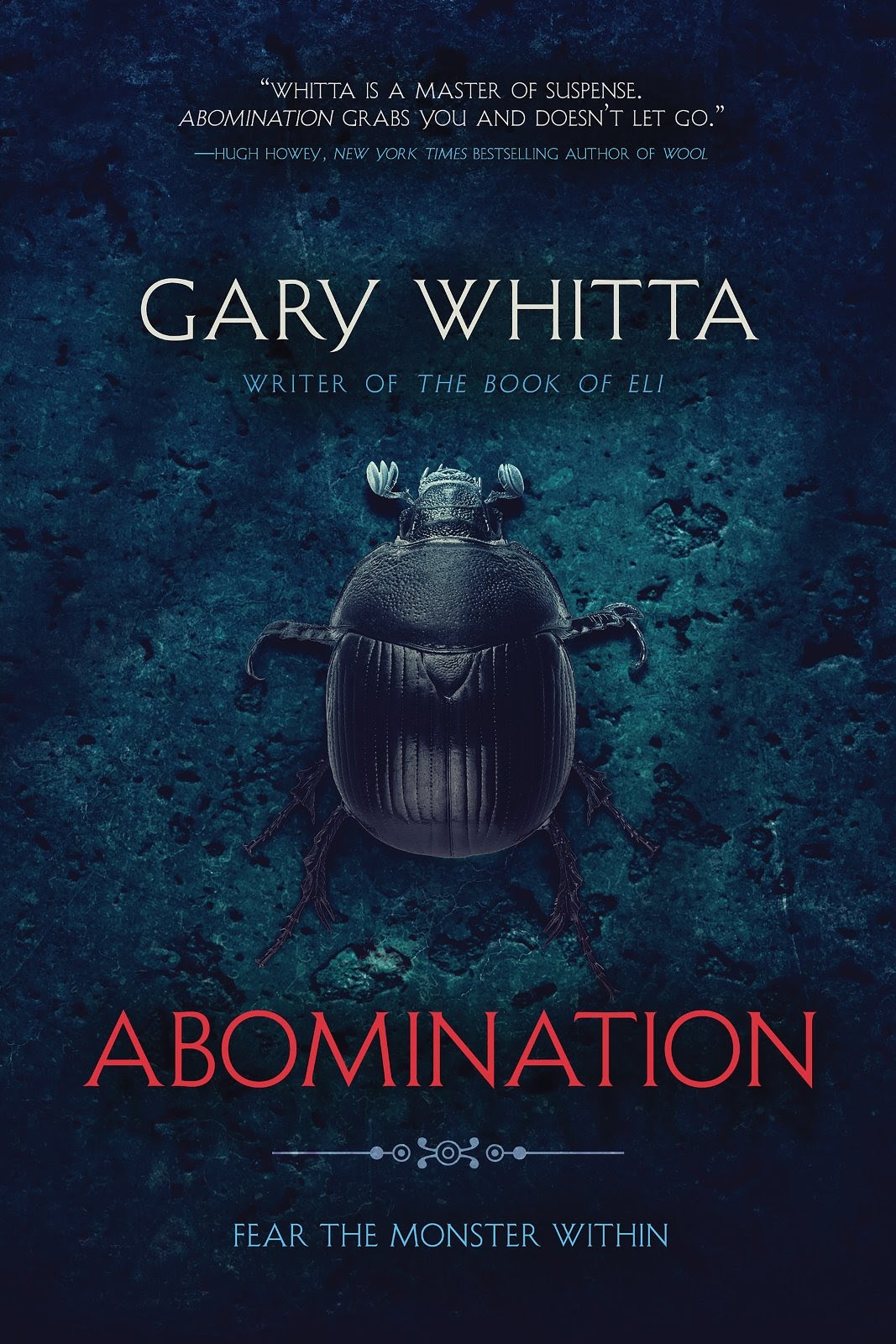 Abomination by Gary Whitta (Inkshares 08/18/2015) – Much of Whitta’s writing has been for Hollywood (Star Wars) or for comics, this is his first novel, I think

He is England's greatest knight, the man who saved the life of Alfred the Great and an entire kingdom from a Viking invasion. But when he is called back into service to combat a plague of monstrous beasts known as abominations, he meets a fate worse than death and is condemned to a life of anguish, solitude, and remorse.

She is a fierce young warrior, raised among an elite order of knights. Driven by a dark secret from her past, she defies her controlling father and sets out on a dangerous quest to do what none before her ever have―hunt down and kill an abomination, alone.

When a chance encounter sets these two against one another, an incredible twist of fate will lead them toward a salvation they never thought possible―and prove that the power of love, mercy, and forgiveness can shine a hopeful light even in history’s darkest age.

I'm curious if Dinosaur Lords actually is as cool as the high concept.