Just one book this week… 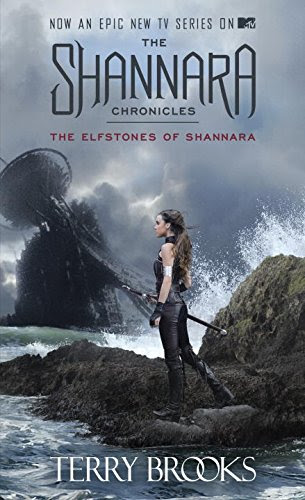 The Elfstones of Shannara by Terry Brooks (Del Rey Mass Market Paperback 12/01/2015) – Nearly thirty years ago, Terry Brooks helped to change the landscape of fantasy publishing with The Sword of Shannara, but it is his second book, The Elfstones of Shannara that many consider his best and most defining novel. Rumors have persisted for years that some kind of Shannara adaption was in the works. Well, in January 2016, MTV of all places will be launching The Shannara Chronicles TV Series and this edition of the book is a tie in edition with (very spoiler) series imagery. My pal Aidan is doing a re-read of the book over at Tor.com in preparation for the TV Show.

ONE OF THE MOST POPULAR FANTASY TALES OF ALL TIME. SOON TO BE AN EPIC NEW SERIES FROM MTV.

Thousands of years after the destruction of the age of man and science, new races and magic now rule the world, but an imminent danger threatens. A horde of evil Demons is beginning to escape and bring death upon the land. Only Wil Ohmsford, the last of the Shannara bloodline, has the power to guard the Elven Princess Amberle on a perilous quest to the save the world, while the leader of the Demon force aims to stop their mission at any cost.

“Shannara was one of my favorite fictional worlds growing up, and I look forward to many return trips.”—Karen Russell, author of Swamplandia!

“If Tolkien is the grandfather of modern fantasy, Terry Brooks is its favorite uncle.”—Peter V. Brett, author of The Skull Throne