August 2022 Reading Round Up

August was an interesting month, in terms of what I read. A couple of big fat fantasies, a couple of darker novels, and I started a new space opera / military science fiction audio book series. I’ll only really mention the two big fat fantasies I read in August since the other two books are review books for SFFWorld.
August started in a big way with Into the Narrowdark the penultimate volume in Tad Williams Last King of Osten Ard series. This series is sequel to his landmark Memory, Sorrow and Thorn trilogy. I reviewed The Empire of Grass (The Last King of Osten Ard #2) and The Witchwood Crown (The Last King of Osten Ard #1) as well as A Brief Retrospective of Tad Williams’s Memory, Sorrow and Thorn over at SFFWorld, so I’m a big fan of everything Tad Williams has written and it may be easy to surmise that Into the Narrowdark was quite high on my anticipated reads list for 2022. 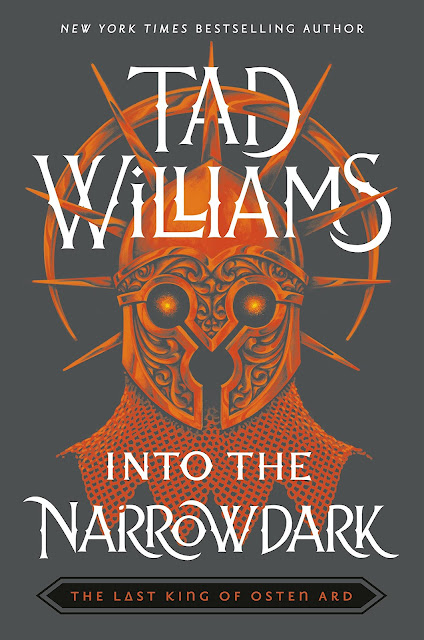 As it turns out, this is just the first half of what is the final volume of The Last King of Osten Ard. Tad has a tendency of publishing four-book trilogies.
The premise of the series is that about three decades have passed since the end of Memory, Sorrow and Thorn with Simon and Miriamele ruling. Their son has passed away and their heir, Morgan, has not turned out to be the prince they’d hoped. In this novel, Tad deftly balances multiple points of view as the world is on the precipice of another momentous change. He does a fantastic job of balancing the weigh of each character’s storylines and weaving in plot threads dangling from 30 years ago. As it turns out, there’s been about 30 years since Memory, Sorrow and Thorn concluded and that’s about the same time that has elapsed in Osten Ard. Those older mysterious and revelations to the characters make for some great moments.
I like what Tad has done with the character of Morgan over the course of these books as the young man matured and is coming into his own. He’s paired up with Nezeru, a harsh sacrifice who acts as his guide through the wilds while he guides her to a life that could be better than what she knew.
Simon, I have to admit, was a little too wrapped up in his grief, but a switch went off with him in the later part of the novel and Miriamele continues to shine in every scene that features her. The Hayholt, the castle that serves as the home and seat of rule, continues to be a mysterious and often creepy place to navigate, as Simon’s granddaughter finds out.
The conclusion/finale of this novel…just…damn you Tad! It was so well executed and is as much of a cliff-hanger ending as you’d want but also hate to read. I can’t wait for The Navigator’s Children.
My only real slight on the book – and this is no fault of Tad Williams – is that DAW books decided to drastically change the look/cover art of the book. The legendary, iconic Michael Whelan painted all the Memory, Sorrow and Thorn covers and the two earlier volumes in this series (as well as many of the covers for Tad’s novels). That is not the case with this book. The cover is fine and eye-catching, but a small bit of magic is missing from the overall physical element of the book. A big, fat, Tad Williams tome just doesn’t seem right without a Michael Whelan cover.
The other big Epic Fantasy novel I read in August was Lamentation, the first installment of Ken Scholes’s Psalms of Isaak five-book saga. This book was published a little over a dozen years ago (2009) and was Ken’s debut novel. 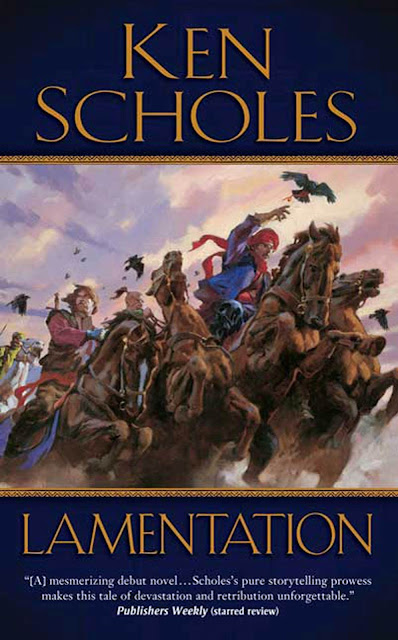 Set in a world that has survived a few apocalyptic events, magic and science coexist, though not always quite comfortably. The inciting incident – the city of Windwir being destroyed, particularly its legendary library – was because a robot cast a spell. From there, the novel winds through a wonderful path of alliances, manipulation, romance, politics, and redemption. Religion is quite powerful in the novel as the philosophy of the long dead P’Andro Whym drives the Androfrancines who are led by a Pope, but that is where the large similarities end.
The main players are Rudolfo, the heroic Lord of Ninefold Forest; the duplicitous Sethbert Overseer of the Entrolusian City States; Jin Li Tam, the prominent daughter of the house of Tam, whose father does a lot of plotting; Neb, the seemingly lone survivor of Windwir; and the old man Petronus who takes Neb under his wing. Scholes does a great job of jumping between these characters to keep the pace of the plot moving very briskly.
The novel is more concerned with how these players react to the destruction of Windwir than anything else, so there isn’t too much world-building on display but the hints (robots and magic coexisting, essentially) are quite intriguing. There are also hints of a deep history to the world, so I'm hoping subsequent volumes will reveal more.
The series was completed a few years ago (in 2017 with Hymn) and I’ve got books 2, 4, and 5 on Mount ToBeRead waiting. I’m quite excited to see where this series goes over the course of those next four novels.
On the audio front, I started Glynn Stewart's The Terran Privateer, the first book in his Duchy of Terra Space Opera/Military SF saga. More on that next month once I finish it since I was only about half-way through when September began.
at 9/07/2022