Last Argument of Kings and an Argument for the Raven

Last night I posted my review to the suberb conclusion of Joe Abercrombie’s First Law Trilogy, Last Argument of Kings. I know I was a little behind in getting to this one, but it was worth the wait for me. Just when I thought I had my favorite reads of the year figured out, I read a book like this one. Anyway, here’s a teaser from my review:

Say one thing about Joe Abercrombie, say he can spin an incredible tale. The story begun in the superb The Blade Itself comes to an inspired and jaw-dropping end in Last Argument of Kings. The comfort level Abercombie flirted with in the previous two volumes is just as tenuous here, both in terms of the surface-level similarities to genre standards as well as the predicaments in which he places his characters.
.
.
.
It’s this synthesis of plot and character which pushes The First Law trilogy at the forefront of modern epic fantasy. Joe Abercrombie plays games with plot and expectation so deftly that even though I might have been able to predict what happens over the course of Last Argument of Kings, I was no less wowed and enthralled with how the plot and events transpired.

I saw Hellboy II over the weekend and thought it OK. Del Toro put lots of cool monsters and creatures, especially in the Troll Market scene, and a lot Hellboy fighting stuff. I think the first movie was better, but this one was still entertaining. 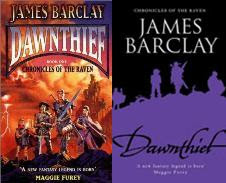 Last, and certainly not least, James Barclay’s first novel Dawnthief is available for free download at the Book Depository (thanks for noting this Jeff!). Dawnthief introduces Barclay’s signature creation, the mercenary band of rogues known as The Raven. I read the first five or so books chronicling The Raven a few years ago, James was even kind enough to mention me in the acknowledgments of Shadowheart. James is a terrific writer whose work is sadly unpublished by a US publisher. James writes in the same vein as David Gemmell and actually struck up a friendship with Gemmell prior to the legendary writer’s passing. I’d even suggest James’s writing would appeal to people who enjoy Brandon Sanderson and Joe Abercrombie a as well, two writers who are receiving both critical acclaim and legions of readers here in the US.

Orbit, Pyr, Tor, Bantam Spectra, Del Rey, or DAW (to name only a few) should be publishing James Barclay here in the US. He’s got wo trilogies and a duology published overseas meaning books ready for quick publication over a nice monthly to bi-yearly schedule. This approach to publishing quick succession and immediate shelf presence did great things for Naomi Novik, Joe Abercrombie, Karen Miller and Brent Weeks. Steven Erikson, Gemmell and even Abercrombie were big overseas before a US publisher caught on and published them here in the US. Let's hope the same holds out for James.
at 12/02/2008