Back to the old format this week, what the hell.

The Heroes by Joe Abercrombie (Orbit Hardcover 02/14/2010) – I’m a big fan of Joe Abercrombie and this will be one of the highlight releases of 2011, but I’ll likely read it before then \.


War: where the blood and dirt of the battlefield hide the dark deeds committed in the name of glory. THE HEROES is about violence and ambition, gruesome deaths and betrayals; and the brutal truth that no plan survives contact with the enemy. The characters are the stars, as ever, and the message is dark: when it comes to war, there are no heroes...

Curnden Craw: a ruthless fighter who wants nothing more than to see his crew survive.

Prince Calder: a liar and a coward, he will regain his crown by any means necessary.

Bremer dan Gorst: a master swordsman, a failed bodyguard, his honor will be restored - in the blood of his enemies.

Over three days, their fates will be sealed.. 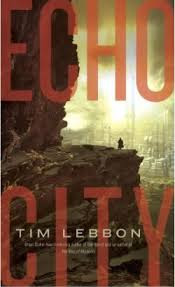 Echo City by Tim Lebbon (Bantam Spectra Mass Market Paperback 11/03/2009) – I’ve seen favorable things about Lebbon’s work, Hobbit of SFFWorld is a pretty big fan and this might be the Lebbon book I finally try..

Surrounded by a vast, poisonous desert, Echo City is built upon the graveyard of its own past. Most inhabitants believe that their city and its subterranean Echoes are the whole of the world, but there are a few dissenters. Peer Nadawa is a political exile, forced to live with criminals in a ruinous slum. Gorham, once her lover, leads a ragtag band of rebels against the ruling theocracy. Nophel, a servant of that theocracy, dreams of revenge from his perch atop the city’s tallest spire. And beneath the city, a woman called Nadielle conducts macabre experiments in genetic manipulation using a science indistinguishable from sorcery. They believe there is something more beyond the endless desert . . . but what?

It is only when a stranger arrives from out of the wastes that things begin to change. Frail and amnesiac, he holds the key to a new beginning for Echo City—or perhaps to its end, for he is not the only new arrival. From the depths beneath Echo City, something ancient and deadly is rising. Now Peer, Gorham, Nophel, and Nadielle msut test the limits of love and loyalty, courage and compassion, as they struggle to save a city collapsing under the weight of its own history.

Empress of Eternity by L.E. Modesitt, Jr (Tor Mass Market Paperback 10/27/2010) – I think this is like the 48th book Modesitt published this year

In the far future, an indestructible and massive canal more than 2,000 miles long spans the mid-continent of Earth. Nothing can mar it, move it, or affect it in any fashion. At its western end, where it meets the sea, is an equally indestructible structure comprising three levels of seemingly empty chambers.

Scientists from three different civilizations, separated in time by hundreds of thousands of years, are investigating the canal. In the most distant of these civilizations, religious rebellion is brewing. A plot is hatched to overthrow the world government of the Vanir, using a weapon that can destroy anything-except the canal. If used at full power it might literally unravel the universe and destroy all life forever. The lives and fates of all three civilizations become intertwined as the forces behind the canal react to the threat, and all three teams of scientists find their lives changed beyond belief.

Trio of Sorcery by edited by Mercedes Lackey (Tor Hardcover 11/09/2010) – Three novellas by the prolific author about, you guessed it, Sorcery.
.

Arcanum 101: Diana Tregarde, practicing witch, romance novelist, Guardian of the Earth. Studying at Harvard, Diana is approached by Joe O’Brian, a young cop who has already seen more than one unusual thing during his budding career. The distraught mother of a kidnap victim is taking advice from a “psychic” and interfering in the police investigation. Will Diana prove that the psychic is a fake? Unfortunately, the psychic is not a fake, but a very wicked witch—and the child’s kidnapper.

Drums: Jennifer Talldeer, shaman, private investigator, member of the Osage tribe. Most of Jennie’s work is regular PI stuff, but Nathan Begay brings her a problem she’s never seen before. His girlfriend, Caroline, is Chickasaw to his Navaho, but that’s not the problem. Somehow, Caroline has attracted the attention of an angry Osage ghost. Thwarted in love while alive, the ghost has chosen Caroline to be his bride in death.

Ghost in the Machine: Ellen McBridge: computer programmer extraordinaire, techno-shaman. The programmers and players of a new MMORPG find that the game’s “boss,” a wendigo, is “killing” everyone—even the programmers’ characters with their god-like powers. A brilliant debugger, Ellen discoveres that the massive computing power of the game’s servers have created a breach between the supernatural world and our own. This wendigo isn’t a bit of code, it’s the real thing . . . and it’s on the brink of breaking out of the computers and into the real world.

The Griffin’s Flight (The Fallen Moon #2) by K.J. Taylor (Ace Mass Market Paperback) – Second in a trilogy of books originally published in the author’s native Australia.

Although he was once chosen as a griffin's companion, Arren Cardockson was reviled, betrayed, and ultimately killed. Brought back to life by a power beyond his understanding, Arren flees for the frozen sanctuary of the North. With the man-eating griffin Skandar by his side, and an entire country hunting him, Arren has little hope of reaching the place of his ancestry and of lifting his curse. But then he comes across a wild woman who may hold the key to making his lifeless heart beat once more.