Apparently, all the authors whose surnames begin with the letterA are releasing books in the next month. 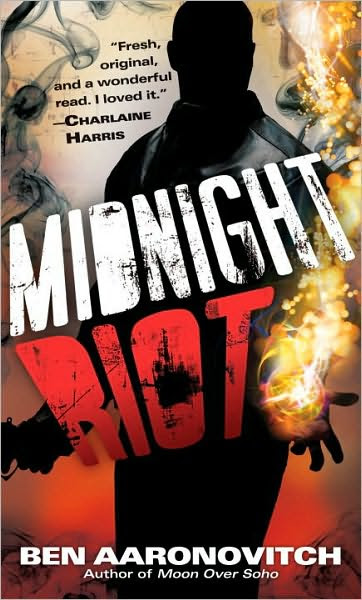 Midnight Riot by Ben Aaronovitch (Del Rey, Mass Market Paperback 02/01/2011) – First in a new Paranormal Police procedural by a writer with experience on the Doctor Who franchise. This book goes by the title Rivers of London in the UK.


Probationary Constable Peter Grant dreams of being a detective in London’s Metropolitan Police. Too bad his superior plans to assign him to the Case Progression Unit, where the biggest threat he’ll face is a paper cut. But Peter’s prospects change in the aftermath of a puzzling murder, when he gains exclusive information from an eyewitness who happens to be a ghost. Peter’s ability to speak with the lingering dead brings him to the attention of Detective Chief Inspector Thomas Nightingale, who investigates crimes involving magic and other manifestations of the uncanny. Now, as a wave of brutal and bizarre murders engulfs the city, Peter is plunged into a world where gods and goddesses mingle with mortals and a long-dead evil is making a comeback on a rising tide of magic. 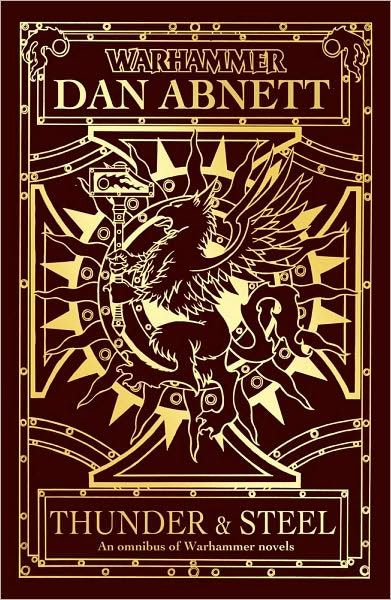 Thunder and Steel by Dan Abnett (Black Library Trade Paperback 01/25/2011) – It seems every other week I get a different book Dan Abnett has authored. This here is an omnibus of three of his Warhammer Fantasy novels and a graphic novel.

Across the Old World, the powers of Chaos seek to bring corruption and death, poisoning the minds of men and filling them with hatred and fury. Only the bravest dare stand against them – two Empire soldiers, marching into the cold wastes of Kislev to face the barbaric Northern hordes, where one will lose his soul to the Ruinous Powers. The high elf Gilead Lothain, who seeks to strike at the servants of the Dark Gods in a quest for vengeance that can never end. The ranks of the noble White Wolves, who stand to defend the majestic city of Middenheim until the last man, never backing down in the face of their enemies.

Thunder and Steel is an epic collection of Dan Abnett’s Warhammer fantasy, including the novels Riders of the Dead, Gilead’s Blood and Hammers of Ulric, plus short stories and the full graphic novel of The Warhammer. 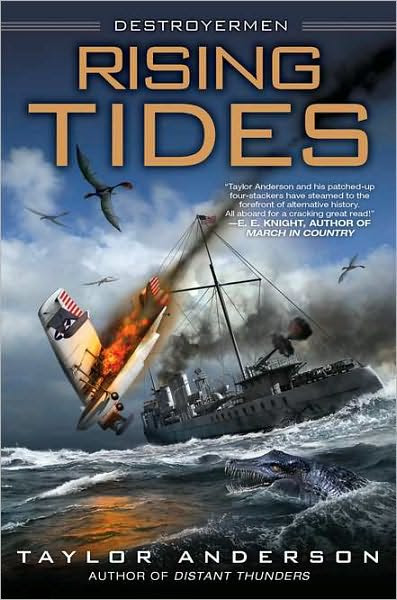 Rising Tides (Destroyermen Book 5) by Taylor Anderson (Roc Hardcover 06/01/2010) – I’ve read and enjoyed the first trilogy (Into the Storm, Crusade, and Maelstrom) in the series plus I’ve still go the fourth book sitting unread. These are fun books, perhaps I’ll do a back-to-back reading of #4 and #5.

In Taylor Anderson's acclaimed Destroyermen series, a parallel universe adds a extraordinary layer to the drama of World War II. Now, as Lieutenant Commander Matthew Reddy and the crew of the U.S.S. Walker continue their battle for both freedom and survival, the stakes become much more personal...and much more perilous. 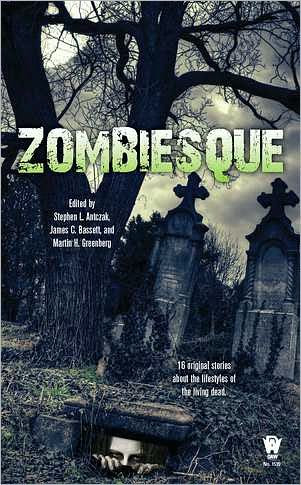 From a tropical resort where visitors can become temporary zombies, to a newly-made zombie determined to protect those he loves, to a cheerleader who won't let death kick her off the team, to a zombie seeking revenge for the ancestors who died on an African slave ship-- Zombiesque invites readers to take a walk on the undead side in these tales from a zombie's point of view. 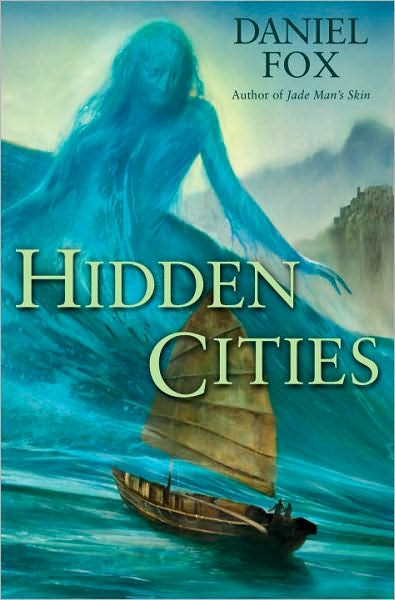 The mythic beasts and glorious legends of feudal China illuminate a world at war in this, the conclusion to Daniel Fox’s critically acclaimed series.

More by chance than good judgment, the young emperor has won his first battle. The rebels have retreated from the coastal city of Santung—but they’ll be back. Distracted by his pregnant concubine, the emperor sends a distrusted aide, Ping Wen, to govern Santung in his place. There, the treacherous general will discover the healer Tien, who is obsessed with a library of sacred mage texts and the secrets concealed within—secrets upon which, Ping Wen quickly realizes, the fate of the whole war may turn.

As all sides of this seething conflict prepare for more butchery, a miner of magical jade, himself invulnerable, desperately tries to save his beautiful and yet brutally scarred clan cousin; a priestess loses her children, who are taken as pawns in a contest beyond her comprehension; and a fierce and powerful woman commits an act of violence that will entwine her, body and soul, with the spirit of jade itself. Amid a horde of soldiers, torturers, and runaways, these people will test both their human and mystical powers against a violent world. But one force trumps all: the huge, hungry, wrathful dragon.

The Sacking of Coruscant. It was the crowning achievement of the Sith Empire’s ambitious military strategy and the moment that changed the history of the Old Republic forever. You may have read about it before, but our first cinematic trailer captures this event with breathtaking action and beautiful detail.

Republic leaders have traveled to Alderaan to engage in promised peace talks with the Sith Empire. The most powerful Jedi have accompanied them to safeguard against an Imperial deception. The Empire’s real motive, however, was simply to lure the Republic’s strongest defenders away from Coruscant and set the stage for an audacious attack. Under the command of Lord Angral, the Sith fleet approaches the Republic’s capital planet for the first time in centuries. In advance of the fleet, the strongest Sith Warriors have flown a stolen Republic ship into Coruscant’s orbit. Their mission is critical – to destroy the planet’s defense grid mainframe hidden in the heart of the Jedi Temple. 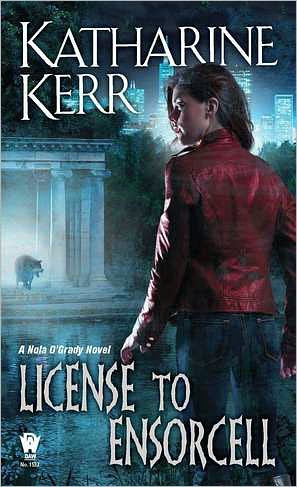 License to Ensorcell (Nola O’Grady Book 1) by KatherineKerr (DAW Mass Market Hardcover 02/01/2011) – Kerr’s Deverry saga is enormous and enormously popular and she’s just closed out the series. So what does she do? She starts an urban fantasy/psychic detective series with this book.

Psychic Agent Nola O'Grady isn't sure returning to San Francisco, and living near her unusual family, is a good idea. Her job, with a psychic agency so obscure even the CIA doesn't know it exists, can be perilous, and she's afraid of the relatives getting involved.

Then the Agency saddles her with Israeli secret agent Ari Nathan, and she has a bigger problem on her hands, because tact and compromise are not Ari's strong points. Their mission is to track down a serial killer obsessed with werewolves. He sees them everywhere and shoots whenever he thinks he has one in his sights. Ari assumes the man's psychotic, but in truth he's murdering actual werewolves. Nola should know. Her younger brother Pat, a lycanthrope, was the first victim.

Can Nola's psychic talents and Ari's skill with guns keep them alive long enough to unravel the greater mystery behind the killings? Can they save the werewolves and the world while stopping Nola's family from running headlong into danger?

Cowboy Angels by Paul J. McAuley (Del Rey, Trade Paperback 01/11/2011) – Mark/Hobbit really liked this one when it originally published in the UK over 3 years ago.

The first Turing gate, a mere hundred nanometers across, is forced open in 1963, at the high-energy physics laboratory in Brookhaven; three years later, the first man to travel to an alternate history takes his momentous step, and an empire is born.

For fifteen years, the version of America that calls itself the Real has used its Turing gate technology to infiltrate a wide variety of alternate Americas, rebuilding those wrecked by nuclear war, fomenting revolutions and waging war to free others from communist or fascist rule, and establishing a Pan-American Alliance. Then a nation exhausted by endless strife elects Jimmy Carter on a reconstruction and reconciliation ticket, the CIA's covert operations are wound down, and the Real begins to wage peace rather than war.

But some people believe that it is the Real's manifest destiny to impose its idea of truth, justice, and the American way in every known alternate history, and they're prepared to do anything to reverse Carter's peacenik doctrine. When Adam Stone, a former CIA field officer, one of the Cowboy Angels who worked covertly in other histories, volunteers for reactivation after an old friend begins a killing spree across alternate histories, his mission uncovers a startling secret about the operation of the Turing gates and leads him into the heart of an audicious conspiracy to change the history of every America in the multiverse—including our own.

Cowboy Angels is a vivid, helter-skelter thriller in which one version of America discovers the true cost of empire building, and one man discovers that an individual really can make a difference.

Enigmatic Pilot: A Tall Tale Too True by Kris Saknussemm (Del Rey, Trade Paperback 3/28/2011) – This is the author’s second novel, after the controversial Zanesville:

In 1844, in a still-young America, the first intimations of civil war are stirring throughout the land. In Zanesville, Ohio, the Sitturd family—Hephaestus, a clubfooted inventor; his wife, Rapture, a Creole from the Sea Islands; and their prodigiously gifted six-year-old son, Lloyd, whose libido is as precocious as his intellect—are forced to flee the only home they have ever known for an uncertain future in Texas, whence Hephaestus’s half-brother, Micah, has sent them a mysterious invitation, promising riches and wonders too amazing to be entrusted to paper.

Thus begins one of the most incredible American journeys since Huck Finn and Jim first pushed their raft into the Mississippi. Along the way, Lloyd will learn the intricacies of poker and murder, solve the problem of manned flight, find—and lose—true love, and become swept up in an ancient struggle between two secret societies whose arcane dispute has shaped the world’s past and threatens to reshape its future. Each side wants to use Lloyd against the other, but Lloyd has his own ideas—and access to an occult technology as powerful as his imagination.

Messiah (Apotheosis Book Three) by S. Andrew Swann (DAW Mass Market Paperback 02/01/2011) – I enjoyed the first book in the trilogy, Prophets, when I read it a couple of years ago. Now that the trilogy is complete, I’ll finish it out myself.

The last stand against the self-proclaimed God, Adam, has retreated to the anarchic planet Bakunin-a world besieged by civil war. Humanity's last hope lies with Nickolai Rajasthan, a Moreau who believes that the human race that created his kind is already damned beyond redemption.