Manhattan in Reverse, Hammered at SFFWorld

It’s Tuesday so my millions…and MILLIONS of blog readers know what time it is. That’s right, the weekly link/blurb/cover of the latest reviews to be posted to SFFWorld. As has been the case in recent weeks, there’s one new review from me and another from Mark. This week. Mark’s review will lead off things then I’ll get the hot tag and jump in the ring.*

(*right, I’ve been watching WWE again so sue me for using some wrestling lingo)

Mark takes a look at the second and latest short fiction collection from, arguably, the biggest name in Science Fiction (specifically of the Space Opera variety) today, Peter F. Hamilton, Manhattan in Reverse:

Before we get started properly, just take a look at that page count. No, that’s not a misprint. Peter’s latest book is about a third to a quarter of the size of his usual blockbusting tome. This is Peter’s second short story collection, the first being A Second Chance At Eden in 1998.

The stories here show many of Peter’s strengths, highlighting key human themes in a variety of different settings in an entertaining way. There are those great ideas, still: super-technology, evolution, planets connected by wormholes, alien biology and habits. However, here the typical widescreen baroque of those larger epic narratives have been replaced by something a little more focused and intimate, but these are still engaging and fun.

My review, Hammered finishes out the initial trilogy/storyline of Kevin Hearne’s supremely enjoyable Iron Druid Chronicles. I don’t think I’m giving anything away by indicating the protagonist, Atticus O’Sullivan, leads a battle against the Norse Gods, and Thor in particular. Fun stuff indeed: 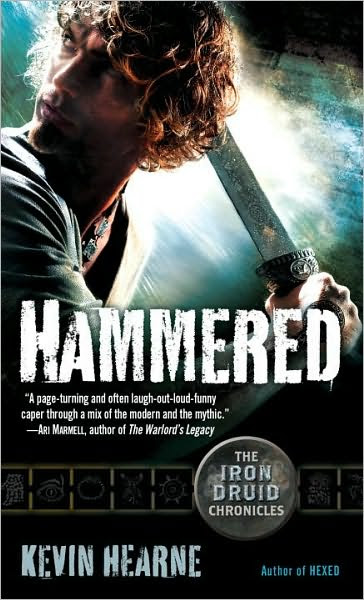 Of course, since plotting to kill a major god isn’t enough for one Druid, Atticus is beset by a sect of Kabbalistic Russian Jews calling themselves the Hammers of God, warnings from the Morrigan, the increasing time spent tutoring his Druid-in-training Granuaile, keeping watch over his widow friend Mrs. MacDonagh, and last but certainly not least, taking care of his Irish Wolfhound Oberon.

So, with Hammered, Hearne has done a lot of things well. For starters, he pays off an undercurrent subplot from the previous two novels. He continues to flesh out his mythological world, and by including Jesus Christ, really shows he isn’t really restraining himself. Hearne also changes up the type of story he’s telling. Whilst the previous two novels had a bit of a quest and battle feel, Hammered adds the feel of a heist/thriller to the mix – both in Atticus’s first foray into Asgard, and the final onslaught with his companions. What he also shows in Hammered is that nothing should be taken for granted and that nothing is safe.