Zombies, Thieves, and Circuses - Oh My!

I’ve got one review over the past week, Mark has two. Normally with that ratio, I’d go Mark’s review-Rob’s review-Mark’s review. I’m changing it up, linking to my review first, since the book I reviewed is a nominee for this past year’s Hugo Award. Mark reviewed a classic of the fantastic and a debut that received a fair amount of acclaim when it hit shelves earlier in the year.

Sometimes a book comes along, you overlook it initially then when you read it you want to go back, slap yourself for initially passing on it because the book is That Damned Good. Case in point, Mira Grant’s FEED, the first of her Newsflesh trilogy: Georgia Mason and her brother Shaun run a popular blog newsite, After the End of Times in the year 2039, about 25 years after the Rising – the first time the dead rose in 2014. Georgia is a Newsie, who reports straightforward news; Shaun is an Irwin (so named after Steve Irwin), since he goes out and pokes & prods the zombies for the cameras, which draws in viewers to their blog; while their third primary leader, Buffy, is a Fictional, who writes stories and poems. Their blog grows in popularity, especially when Senator Peter Ryman invites Georgia and crew to join his campaign trail, becoming the first bloggers allowed access to such a presidential campaign. This, of course, increases their popularity/ratings, but with the legitimacy afforded by such an invite, consequences and fallout are naturally expected. The consequences in Feed, being a science fiction/horror hybrid (with political thriller elements thrown into the mix), are more than anything for which Georgia, Shaun, and Buffy bargained.

Grant goes into great detail about the scientific nature of the cause of zombies, and she does it an informal conversational way through Georgia that it is both gripping, provides a breather from some of the more intense narrative scenes, and pushes the story forward. While the narrative is told mainly in Georgia’s first person voice, it is interspersed with passages from the blogs of Georgia, Shaun, and Buffy. In both the ‘breaks from action’ and well handled scientific rationale, I was reminded a great deal of Scott Westerfeld’s brilliant vampire novels Peeps and The Last Days.

The debut Mark reviewed has been released in both the US and the UK this year and features a rogue-ish protagonist Among Thieves, which serves as both Douglas Hulick’s debut and the first of the Tales of the Kin saga:

This is a lively and very competent debut. Rising above what could’ve been a difficult sell – a man whose life revolves around deception and murder is not often a character to like – but Douglas manages this difficult balancing act pretty well. For Drothe is an honourable thief, a murderer with scruples.

This one rattled along nicely from revelation to revelation. We find that items are discovered that may have consequences for all of those involved. Drothe and Degan engage in a pact that will have implications for them both, and may indeed be connected to a plot to kill the Emperor. Unrest in the Kin-run areas of town lead Drothe and his compatriots being involved in a series of street fights, setting and avoiding traps for the unwary and trying to avoid being both betrayed and the betrayers of all they hold dear.

The Circus of Dr. Lao by Charles Finney is a classic of early 20th Century fantastic literature, which was filmed in the 1960s starring Tony Randall. I read the book a few years ago, liked it a lot, and Mark recently reviewed it: 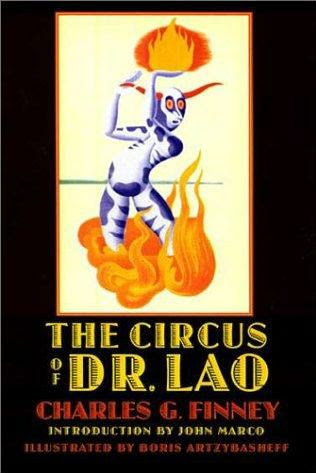 The book begins in what we would now see as a small-town USA / Stephen King kind of way, as the town’s inhabitants read of the circus through an advertisement placed mysteriously in the town’s newspaper. The book shows us the effects of the circus on various members of the Abalone community, amongst them the newspaper printer and copy editor, a local schoolteacher, the children of the town and a down-and-out (this was the time of the Great Depression) recently discharged from the Army, amongst others.
...
Some of the language is Bradbury-poetic, lyrical and obscure. It’s not every day that you read the word ‘pulchritude’, even less so on the first page of the novel. It is also deliberately ambiguous in its plot, a book that doesn’t explain everything and doesn’t finish with an ending that ties everything up, though it is apt. It even poses some questions at the end not answered in the book!

I keep promising myself that I'll pick up 'FEED' soon, and every time I see a review for it I bump it closer to the top of the TBR pile.

Thanks for the bump :)