Mark and I have got two Orbit titles in our weekly spot here at the ‘o Stuff.

Robert Jackson Bennett has been making waves with each of the three novels he’s published over the last three years. I finally picked up his third novel, The Troupe, and at this point in June, I think it is my favorite 2012 novel: 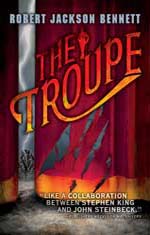 Circuses, carnivals and traveling entertainers have been popular elements of fantastic fiction going back to Charles Finney’s Circus of Dr. Lao to Ray Bradbury’s Something Wicked This Way Comes. Placing Bennett’s The Troupe alongside those iconic novels of dark fantasy is an easy thing to do for many reasons. Bennett’s style is both subtle and powerful, he doesn’t often beat the reader over the head with blatant imagery or themes. Rather, the hints and pieces he offers the reader work so effectively to build a collaborative engagement of conversation between writer and reader that it proves all the more powerful. We know there’s a big curtain and behind that curtain, lots of pieces and players are moving around while the performers in front of the curtain waive their hands for the audience. In that respect, Silenus’s Troupe is just the front for much larger events and performances, as well as intimate movements and emotions.
…

Throughout my experience with The Troupe I felt echoes or resonances with a lot of fiction I’ve read or watched over the years that rang very True. Not that Mr. Bennett was repeating the cadence as much as he was adding to the overall song. Some of these resonances include the aforementioned Ray Bradbury, as well as Stephen King (thematically The Dark Tower and specifically Low Men in Yellow Coats), Neil Gaiman, Carlos Ruiz Zafon’s The Shadow of the Wind, the television show Lost, among other elements. What Bennett cued into is the veneer that much more is going on behind the curtain than what the reader sees on the page or the audience sees on the stage – a grand chess match between powers people can’t comprehend, let alone even realize exist.

Mark’s book is a hotly anticipated releases and sequel to an award-nominated book, Caliban’s War, the second novel in The Expanse sequence by James S.A. Corey the open pseudonym for Daniel Abraham and Ty Franck:

Whereas last time the tale was mainly told from space pilot Holden and detective Miller’s points of view, this time we have just Holden’s but added to that are the characters of Bobbie, a Martian soldier who is the sole survivor of a massacre on Ganymede, Avasarala, a diplomat trying to bring the Earth-Mars-Outer planets dispute to an end, and Praxidike/Prax, a scientist on Ganymede whose daughter is mysteriously kidnapped just before a solar mirror crashed down on the planet-sized moon of Jupiter. It seems that the disaster may have been an attempt to cover the kidnapper’s tracks, and like on Eros in Leviathan Wakes, the actions of multi-corporations are again suspected.

Interestingly, the authors have improved some of the characters we have met before – most especially Holden, who, as less of a Dan Dare type hero this time around, I appreciated much more than I did in Leviathan Wakes. Having got to know the characters in the previous novel, Caliban’s War is where the books build on the friendship between Holden and the rest of his crew to keep things together. This works especially with Naomi, but also Alex and Amos. Their mutual affection reminded me here of Chris Wooding’s Ketty Jay series. Like that series, friendships are tested here, and the outcome is not always pleasant.