I’ve got a review or two to mention today, as usual, one review is written by yours truly whilst Mark is the author of the other review.

John Scalzi’ is one of the most popular SF writers today, thanks in no small part to his great blog and of course his entertaining novels. Possibly his most anticipated is Redshirts which publishes today: 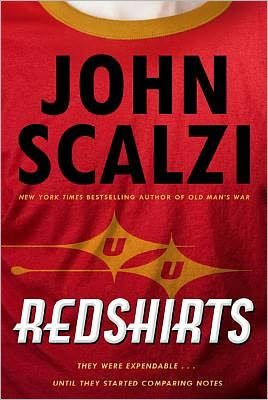 In Redshirts, Scalzi plays on one of the older tropes in science fiction, at least that of the expendable characters. The old trope that was codified by Star Trek (the original series) wherein Spock, Kirk, McCoy and a guy wearing a Federation issued Red shirt would land on the planet only for three of the four members of the away party to make it back to the U.S.S. Enterprise. This is par for the course since the Red shirted member of the away team is played by an unknown actor. Except when those characters are real people (or as real as fiction characters from a novel who are fictional characters on a TV Show can be) become ‘aware’ and realize the lesser crew members assigned to away parties are always dying. When Dahl and his companions encounter a man or ‘yeti’ as they call him, named Jenkins (think the mysterious Laszlo from the 1980s comedy gem Real Genius), they learn of the power of Narrative, and specifically the Narrative of a show called The Chronicles of the Intrepid. So yes, Scalzi is going for the whole meta-fiction thing here and for the most part, I felt it worked. No doubt Scalzi’s work on Stargate Universe aka SG:U (criminally cancelled far too early by the network once known as the SciFi Channel), informed a good deal of the inner workings of how a space-based science fiction television show works. The comparisons between SG:U and The Chronicles of the Intrepid end there because – even as Dahl and his fellow Redshirts note - The Chronicles of the Intrepid is written terribly and SG:U was terrific.

Mark takes a look at an interesting mix between game and novel, the first Destiny Quest installment by Michael J. Ward, The Legion of Shadow:

Here’s an unexpected surprise: a game book that’s both retro and forward looking.

From the start though, you pretty much know what you’re going to get: the cover shows a hooded, cloaked man, eyes aglow, stares at you with a horde of equally evil-looking warriors behind him. Around his left hand, a purple orb of glowing electricity, and in his right hand, an enormous staff, seething with arcane power.
…

For someone used to the Steve Jackson and Ian Livingstone Fighting Fantasy game books from the 1980’s, or Dungeon and Dragons role-playing, you’ve pretty much got the idea of what goes on here. You start as an outcast with no memory of your background or history. This allows you to develop new characteristics as you develop, becoming one of the archetypes mentioned earlier such as a rogue, a mage and a warrior, and realising your destiny. There are quests and sub-quests, demons and monsters, good guys and bad. Ultimately your aim is to defeat the bad guy and his various allies, determined to do you and the world harm. Along the way, the choices you make (or are determined by the throw of a die) affect where you go and what you do.