Just a small batch of books this week at the o' Stuff, one of which I previously received as an ARC

Homeland by Cory Doctorow (Tor Hardcover 02/19/2013) – This is the sequel to Dorctorow’s Little Brother which I enjoyed a great deal when I read it.


In Cory Doctorow’s wildly successful Little Brother, young Marcus Yallow was arbitrarily detained and brutalized by the government in the wake of a terrorist attack on San Francisco—an experience that led him to become a leader of the whole movement of technologically clued-in teenagers, fighting back against the tyrannical security state.

A few years later, California's economy collapses, but Marcus’s hacktivist past lands him a job as webmaster for a crusading politician who promises reform. Soon his former nemesis Masha emerges from the political underground to gift him with a thumbdrive containing a Wikileaks-style cable-dump of hard evidence of corporate and governmental perfidy. It’s incendiary stuff—and if Masha goes missing, Marcus is supposed to release it to the world. Then Marcus sees Masha being kidnapped by the same government agents who detained and tortured Marcus years earlier.

Marcus can leak the archive Masha gave him—but he can’t admit to being the leaker, because that will cost his employer the election. He’s surrounded by friends who remember what he did a few years ago and regard him as a hacker hero. He can’t even attend a demonstration without being dragged onstage and handed a mike. He’s not at all sure that just dumping the archive onto the Internet, before he’s gone through its millions of words, is the right thing to do.

Meanwhile, people are beginning to shadow him, people who look like they’re used to inflicting pain until they get the answers they want.

Fast-moving, passionate, and as current as next week, Homeland is every bit the equal of Little Brother—a paean to activism, to courage, to the drive to make the world a better place.

Firebrand (Rebel Angels Book One) by Gillian Philip (Tor Hardcover 03/05/2013) – First US publication of Philip’s novel, which launches a series and was nominated for the David Gemmell Legend award.

At the end of the sixteenth century, religious upheaval brings fear, superstition, and doubt to the lives of mortals. Yet unbeknownst to them, another world lies just beyond the Veil: the realm of the Sithe, a fierce and beautiful people for whom a full-mortal life is but the blink of an eye. The Veil protects and hides their world…but it is fraying at the edges, and not all think it should be repaired.

Discarded by his mother and ignored by his father, sixteen-year-old Seth MacGregor has grown up half wild in his father’s fortress, with only his idolized older brother, Conal, for family. When Conal quarrels with the Sithe queen and is forced into exile in the full-mortal world, Seth volunteers to go with him.

But life beyond the Veil is even more dangerous than they expected, and Seth and Conal soon find themselves embroiled in a witch-hunt—in which they are the quarry. Trapped between the queen’s machinations at home and the superstitious violence of the otherworld, Seth must act before both of them are fed to the witch-hunters’ fires…

Brimming with intrigue and rebellion, Firebrand is the first book in the Rebel Angels series by Gillian Philip, the Carnegie Medal–nominated author of Crossing the Line and multi-award-nominated Bad Faith. 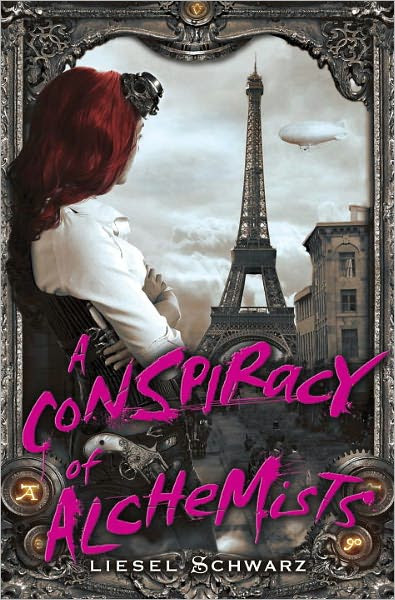 A Conspiracy of Alchemists (Book One in The Chronicles of Light and Shadow) by Liesel Schwarz (Del Rey Hardcover 03/05/2013) – Schwarz’s debut novel is also the launch of a Steampunk series with what seems to be vampires added for good measure. This one seems like it would appeal a great deal to fans of Gail Carriger.

LEAVE IT TO CHANCE. Eleanor “Elle” Chance, that is—a high-flying dirigible pilot with a taste for adventure and the heroine of this edgy new series that transforms elements of urban fantasy, steampunk, and paranormal romance into pure storytelling gold.

It is 1903, and the world is divided between light and shadow. On the side of light is a wondrous science that has transformed everyday life by harnessing magical energies to ingenious new technologies. But each advance of science has come at the expense of shadow—the traditional realm of the supernatural.

Now two ancient powers are preparing to strike back. Blood-sucking immortal Nightwalkers and their spellcasting Alchemist allies have a plan to cover the whole world in shadow. All they require is the sacrifice of a certain young woman whose past conceals a dangerous secret.
at 2/17/2013