A wide assortment of books this week at the 'o Stuff, but the majority of it arrived virtually on my Kindle from the fine folks at 47North

OZ Reimagined edited by John Joseph Adams and Douglas Cohen (47North Trade Paperback and eBook 02/19/2013) – Adam’s output continues to impress with another anthology this year. He recruits Doug Cohen, former editor at Realms of Fantasy magazine for an assist.


When L. Frank Baum introduced Dorothy and friends to the American public in 1900, The Wonderful Wizard of Oz became an instant, bestselling hit. Today the whimsical tale remains a cultural phenomenon that continues to spawn wildly popular books, movies, and musicals. Now, editors John Joseph Adams and Douglas Cohen have brought together leading fantasy writers such as Orson Scott Card and Seanan McGuire to create the ultimate anthology for Oz fans—and, really, any reader with an appetite for richly imagined worlds.

Plus, each story in the anthology has been illustrated by artist Galen Dara, who also provided the cover for the book.

Seven Kinds of Hell (Fangborn #1) by Dana Cameron (47North Trade Paperback and eBook 03/12/2013) – Cameron’s published quite a few short stories and mysteries, this novel marks the launch of a new urban fantasy series..


Archaeologist Zoe Miller has been running from a haunting secret her whole life. But when her cousin is abducted by a vicious Russian kidnapper, Zoe is left with only one option: to reveal herself.


Unknown to even her closest friends, Zoe is not entirely human. She’s a werewolf and a daughter of the “Fangborn,” a secretive race of werewolves, vampires, and oracles embroiled in an ancient war against evil.

To rescue her cousin, Zoe will be forced to renew family ties and pit her own supernatural abilities against the dark and nefarious foe. The hunt brings Zoe to the edge of her limits, and with the fate of humanity and the Fangborn in the balance, life will be decided by an artifact of world-ending power. 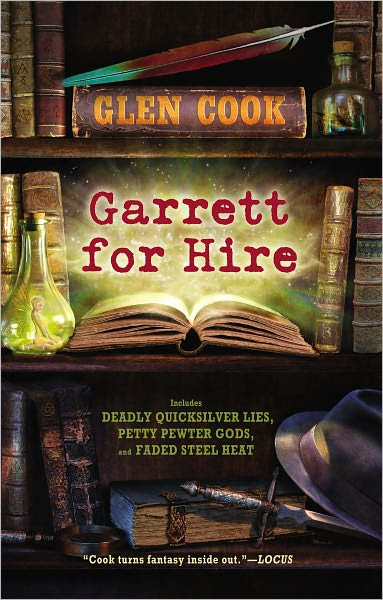 Garrett For Hire (The Third Garrett P.I. Omnibus) by Glen Cook (Roc Trade Paperback 03/05/2013) – This is the third 3-in-1 omnibus feature Cook’s Urban Fantasy/Mystery series, which predates much of what is considered Urban Fantasy on today’s shelves. Smart move by ROC, though I hadn’t realized they were omnibifying these books until now, so the first and second omnibii are out now too, I suppose.


Meet Garrett, P.I. He’s a hardboiled human detective who stands out in a crowd of elves, trolls, and other otherworldly denizens in the magical city of TunFaire. Garrett For Hire is “fantasy noir at its best" (Library Journal), collecting three novels from Glen Cook’s classic urban fantasy series.

Deadly Quicksilver Lies
A rich woman hires Garrett to find her missing daughter…or to act as her hitman. In TunFaire, sometimes it’s hard to tell the difference, leaving him no choice but to sift through the sex, intrigue, and murder to uncover the truth behind this case…

Petty Pewter Gods
With TunFaire real estate at a premium and prayer palaces at a minimum, the big gods on the block hold a contest: find the “key” to the one temple still available for worship. And when two rival pantheons try to hire Garrett to find it on their behalf, he finds himself facing the wrath of gods…

Faded Steel Heat
Riots between humans and non-humans have turned TunFaire into a war zone. And when a powerful gang of “human rightists” drag Garrett into the fray, he defends himself with a circle of friends no one would wish on their worst enemy… 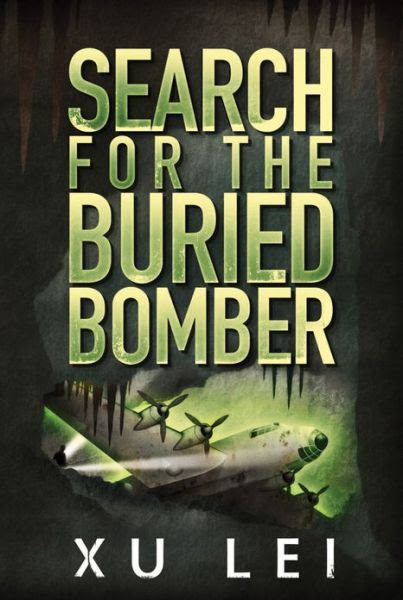 Search for the Buried Bomber by Xu Lei and translated by Gabriel Ascher (AmazonCrossing Trade Paperback and eBook 02/19/2013) – With over a million subscribers to his microblog and five million books sold, Xu Lei is one of China's most popular and highest grossing novelists, I think this is his first work translated into English.

The X-Files meets Indiana Jones in Search for the Buried Bomber, the first in Xu Lei’s Dark Prospects series of thrillers steeped in archeological myths and government secrets.

During China’s tumultuous Cultural Revolution, the People’s Liberation Army dispatches an elite group of prospectors famous for their work uncovering rare minerals to the mountains of rural Inner Mongolia. Their assignment: to bring honor to their country by descending into a maze of dank caves to find and retrieve the remnants of a buried World War II bomber left by their Japanese enemies. How the aircraft ended up beneath thousands of feet of rock baffles the team, but they’ll soon encounter far more treacherous and equally inexplicable forces lurking in the shadows. Each step taken—and each life lost—brings them closer to a mind-bending truth that should never see the light of day. Pride sent them into the caves, but terror will drive them out.

Through the eyes of one of the prospectors, bestselling Chinese author Xu Lei leads readers on a gripping and suspenseful journey. 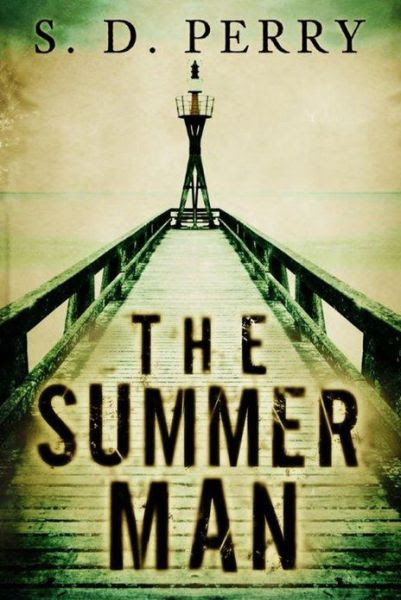 The Summer Man by S.D. Perry (47North Trade Paperback and eBook 05/17/2013) – Perry’s written quite a few video game, movie tie-ins and franchise books. This (I think) is her first original fiction in novel-length form


Amanda Young grew up in Port Isley, a remote seaside community perched on the outermost shores of Washington. She’s watched as, each summer, the tight-knit small village braces for the invasion of vacationers seeking refuge from city life. But this year, a new kind of visitor arrives in Port Isley, bringing something most unexpected.


Soon after the season begins, a teenage girl’s mutilated body is found in a local park. The police declare it a random act of violence, but Amanda’s not so sure…because how can she explain that she had a premonition of the crime just hours before it happened? Or that the neighbors she’s known forever inexplicably are beginning to change…into lustful, violent shadows of themselves? Amanda knows something’s not right. And she knows it has something to do with the sinister stranger who’s come to town. But can she uncover his dark secret in time to stop him—and in time to save the souls of Port Isley?

The Rithmatist by Brandon Sanderson (Tor Hardcover 05/14/2013) – I’m a big fan of Brandon’s writing, so I’ll be reading this at some point and maybe have him sign it when I participate in the Philadelpha, PA signing for A Memory of Light as a Memory Keeper.

More than anything, Joel wants to be a Rithmatist. Chosen by the Master in a mysterious inception ceremony, Rithmatists have the power to infuse life into two-dimensional figures known as Chalklings. Rithmatists are humanity's only defense against the Wild Chalklings—merciless creatures that leave mangled corpses in their wake. Having nearly overrun the territory of Nebrask, the Wild Chalklings now threaten all of the American Isles.


As the son of a lowly chalkmaker at Armedius Academy, Joel can only watch as Rithmatist students learn the magical art that he would do anything to practice. Then students start disappearing—kidnapped from their rooms at night, leaving trails of blood. Assigned to help the professor who is investigating the crimes, Joel and his friend Melody find themselves on the trail of an unexpected discovery, one that will change Rithmatics—and their world—forever.

Bestselling author Brandon Sanderson brings his unique brand of epic storytelling to the teen audience with an engrossing tale of danger and suspense—the first of a series. With his trademark skills in worldbuilding, Sanderson has created a magic system that is so inventive and detailed that readers who appreciate games of strategy and tactics just may want to bring Rithmatics to life in our world. 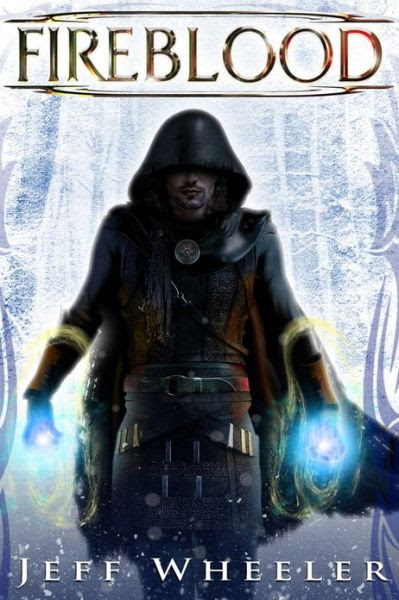 Fireblood (Whispers from Mirrowen) by Jeff Wheeler (47North Trade Paperback and eBook 02/05/2013) – I recall coming across Wheeler’s fiction years ago in Deep Magic, one of the first e-Zines I recall seeing.


Tyrus of Kenatos has made it his life’s work to banish the plagues that ravage the kingdoms. He believes the answer to ending the devastation lies in the Scourgelands. Yet, Tyrus’s first expedition into the cursed woods failed after being defeated by mysterious minions who stalked and killed most of his band.


Now a prisoner in his own tower, Tyrus has summoned his nephew Annon—a Druidecht possessing innate magic called the fireblood—on the guise of finding a hidden treasure with which to purchase his twin sister Hettie’s freedom. But in reality, Tyrus is using his niece and nephew, and their magic, as an opportunity to escape and resume his desperate mission. And to aid them, he has enlisted the warrior-monk Paedrin—who is almost as green as the siblings when it comes to traveling these troubled lands. The trio is determined, and along the way they grow to trust each other—and new additions to the group—in order to accomplish their missions…whether or not those missions are one and the same.

But the Arch-Rike—ruthless ruler of Kenatos—has learned of these plans, and has sent the fearsome Kishion to destroy all those that oppose him. Now Tyrus and his unwitting allies must face down not only the plague, but this new enemy—and fulfill their quest before a fresh horror is unleashed on the world…
at 2/10/2013