I’ve got a new review up at Tor.com, a novel for me that had an extremely high anticipation factor and Mark continues his read-through of the Virginia Edition of Robert A. Heinlein’s work.

My review is The Daylight War by Peter V. Brett, the third in is five-book Demon Cycle. I was very pleased with the novel as you may see if you click through to the review. 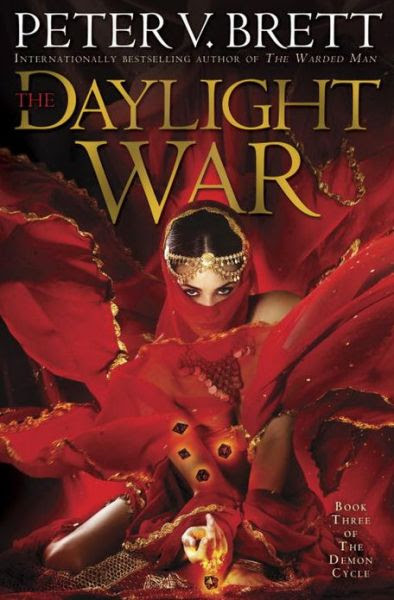 While the demons are still very present in The Daylight War, humanity’s remnants need to get their collective heads together before the demon threat can effectively be vanquished. In many post-apocalyptic stories—and a case can be made for The Demon Cycle as a post-apocalyptic story—the trigger event marginalizing human society becomes window dressing as the story progresses and the human character’s conflict takes center stage.

The mythology/worldbuilding behind the demons hinted in the previous volume is revealed slightly more here in The Daylight War, as Brett peppers in chapter passages from the POV of the demons, providing readers with a glimpse of their society and race as a whole. Whether he will continue to expose more of the demons’ nature and origins remains to be seen, but I enjoyed the slow reveal unfolding here and I am very curious to see how much of the demons’ history Brett will allow readers to see.


Mark Heinlein read-through catches him up with Red Planet

What surprises me most on re-reading is how complex this book really is behind the obvious plot narrative. We have ancient Martian races, social revolution and rather manipulative humans on a Bonestellian style planet. Our hero is, as was rather traditional for these books, a teenage human male, whose growing up (see: rite-of-passage) was rather frontier-like. On the cutting edge of space colonisation, Jim Marlowe is a pioneer. It’s not by accident the original edition was subtitled on the cover, ‘A colonial boy on Mars’.

Rather surprisingly, Willis still reads as an engagingly depicted character that would gladden the heart of any young reader, although he/she/it is basically a canine substitute (and is something that Heinlein will use again in later books such as Star Beast and The Rolling Stones/Space Family Stone, for example.) It’s not by coincidence that Tor Books once referred to the novel as ‘One Boy and his Martian.’ Supremely loyal and endearingly enthusiastic, these days I can see the similarities between Willis and Edgar Rice Burroughs’s Woola more clearly.