Only two books on this shortened week, one of which is an eArc.

The Little Green Book of Chairman Rahma by Brian Herbert (Tor Hardcover 07/08/2014) – This solo outing for Herbert is a near future environmental SF thriller.

A revolution has taken over the government of the United States and the environment has been saved. All pollution has been banned and reversed. It's a bright, green new world. But this new world comes with a great cost. The United States is ruled by a dictatorship and the corporations are fighting back. Joining them are an increasing number of rebels angered by the dictatorship of Chairman Rahma. The Chairman's power is absolute and appears strong, but in The Little Green Book of Chairman Rahma by Brian Herbert, cracks are beginning to show as new weapons are developed by the old corporate powers, foreign alliances begin to make inroads into America's influence . . . and strange reports of mutants filter through the government's censorship. 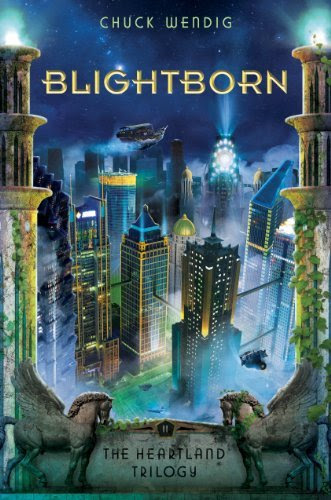 Blightborn (Book 2 of The Heartland Trilogy) by Chuck Wendig (Skyscape Mass Market Paperback 07/29/2014) – The writing machine that is Chuck Wendig gives us the sequel/second book in the this trilogy, the first (Under an Empyrian Sky) of which I enjoyed
a great deal.

Cael McAvoy is on the run. He’s heading toward the Empyrean to rescue his sister, Merelda, and to find Gwennie before she’s lost to Cael forever. With his pals, Lane and Rigo, Cael journeys across the Heartland to catch a ride into the sky. But with Boyland and others after them, Cael and his friends won’t make it through unchanged.

Gwennie’s living the life of a Lottery winner, but it’s not what she expected. Separated from her family, Gwennie makes a bold move—one that catches the attention of the Empyrean and changes the course of an Empyrean man’s life.

The crew from Boxelder aren’t the only folks willing to sacrifice everything to see the Empyrean fall. The question is: Can the others be trusted?

They’d all better hurry. Because the Empyrean has plans that could ensure that the Heartland never fights back again.

Chuck Wendig’s riveting sequel to Under the Empyrean Sky plunges readers into an unsettling world of inequality and destruction, and fleshes out a cast of ragtag characters all fighting for survival and, ultimately, change.
at 7/06/2014

Here's how I stacked the shelves this week.