Small batch of arrivals this week. I suspect many of the folks who normally would send me stuff are heavily involved in San Diego Comic Con... 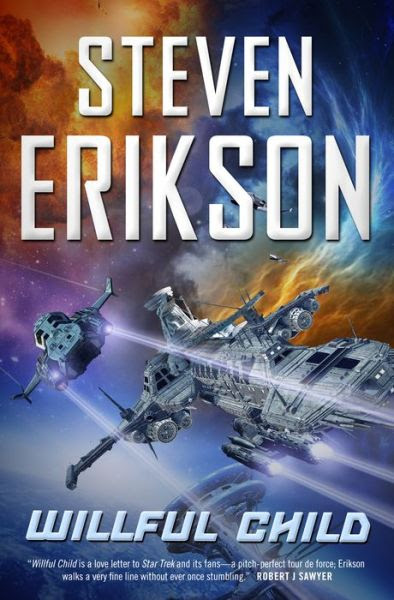 
From the New York Times Bestselling author Steven Erikson comes a new SF novel of devil-may-care, near calamitous and downright chaotic adventures through the infinite vastness of interstellar space.


These are the voyages of the starship A.S.F. Willful Child. Its ongoing mission: to seek out strange new worlds on which to plant the Terran flag, to subjugate and if necessary obliterate new life-forms, to boldly blow the...

And so we join the not-terribly-bright but exceedingly cock-sure Captain Hadrian Sawback and his motley crew on board the Starship Willful Child for a series of devil-may-care, near-calamitous and downright chaotic adventures through ‘the infinite vastness of interstellar space.’

The New York Times bestselling author of the acclaimed Malazan Book of the Fallen sequence has taken his lifelong passion for Star Trek and transformed it into a smart, inventive, and hugely entertaining spoof on the whole mankind-exploring-space-for-the-good-of-all-species-but-trashing-stuff-with-a-lot-of-high-tech-gadgets-along-the-way, overblown adventure. The result is an SF novel that deftly parodies the genre while also paying fond homage to it.

Assail (A Novel of the Malazan Empire) by Ian Cameron Esslemont (Tor Hardcover 05/21/2013) – I’ve only read Night of Knives in this second Malazan sequence, so I’ve got some catching up to do with ICE’s brand of Malazan stories. Mark Yon and I interviewed with him up at the SFFWorld last year.

Tens of thousands of years of ice is melting, and the land of Assail, long a byword for menace and inaccessibility, is at last yielding its secrets. Tales of gold discovered in the region’s north circulate in every waterfront dive and sailor’s tavern, and now countless adventurers and fortune-seekers have set sail in search of riches.

Into this turmoil ventures the mercenary company, the Crimson Guard. Not drawn by contract, but by the promise of answers: answers to mysteries that Shimmer, second in command, wonders should even be sought.

Arriving also, part of an uneasy alliance of Malazan fortune-hunters and Letherii soldiery, comes the bard Fisher kel Tath. And with him is a Tiste Andii who was found washed ashore and cannot remember his past life, yet who commands far more power than he really should. Also venturing north is said to be a mighty champion, a man who once fought for the Malazans, the bearer of a sword that slays gods: Whiteblade.

And lastly, far to the south, a woman guards the shore awaiting both her allies and her enemies. Silverfox, newly incarnated Summoner of the undying army of the T’lan Imass, will do anything to stop the renewal of an ages-old crusade that could lay waste to the entire continent and beyond.

Email ThisBlogThis!Share to TwitterShare to FacebookShare to Pinterest
Labels: Books in the Mail, Steven Erikson

Damn. That's 2 people now I've seen with copies of Willful Child. Here's hoping mine is on the way, because this looks like a ton of fun.