Friday Round-Up: I'm All over the Place

Got a few things to catch up on in this week’s Friday Round-up. Let’s begin.

Last week, an interview I conducted with one of my favorite writers, C.S. Friedman, was posted to SFFWorld. In it, we discussed her latest YA novel Dreamseeker as well as some of her past work and the great covers her books have had: 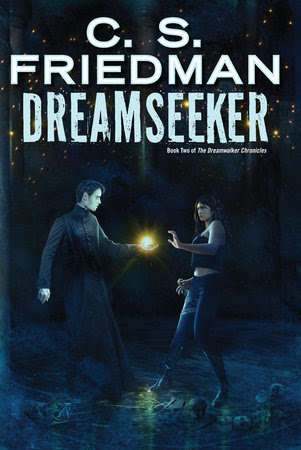 The first novel was told in two narrative voices, reading Jesse’s voice helped to impart a great deal of empathy with me as the reader, while the more omniscient views of the story allowed for a greater scope. Will Dreamseeker bounce between those two POVs.


Yes, but with more time devoted to the third person narrative. Dreamseeker follows the story of two main characters whose fates have now become intertwined: Jesse, who is from our world, and Isaac, a young apprentice from a Guild of undead necromancers known as Shadows, who helped Jesse escape from captivity in Dreamwalker. In Dreamseeker, Isaac attempts to return home and make peace with his family, but his human soul cannot accept what undead demand of him.


Was it a challenge to tell the story from two types of narrative perspectives or did it just seem to be the only way to tell it?


My second novel, The Madness Season, alternated between first-person and third-person storytelling as well, so this is not something new for me. The combination is particularly powerful when dealing with a rite of passage story like Dreamwalker, as it allows the reader to experience an intimate connection with the main character, while leaving me free to explore facets of the narrative that she is not aware of.

The balance in Dreamseeker and the third book, Dreamweaver, will be more 50-50 than Dreamwalker was, in part because other characters are now coming to the fore. 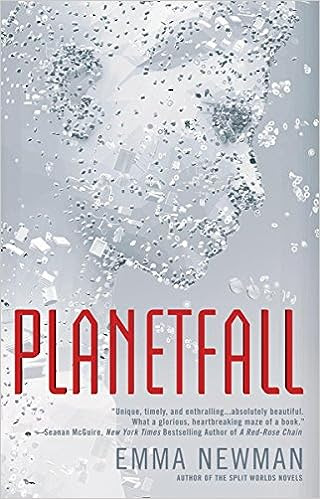 Planetfall is at once a fascinating character study through Ren’s first person narrative and a novel that examines how secrets, no matter how buried they are, can be extremely damaging things especially in a small colony in a seeming utopia. Ren spends much of her day as the colony’s printer, responsible for overseeing an advanced 3-D printer which is used to repair damaged items or create them when necessary. Any items. Ren’s obsession with repairing things is a mask for trying to repair the damages left in the wake of Lee’s disappearance and burying her own guilt in the tragic events which transpired nearly two decades ago.
…
The Unreliable Narrator is quite common in genre, but Newman has effectively dropped the mic on that narrative tool. Ren is a fractured woman who gives new depth to the meaning “unreliable,” and as the story progresses, Ren becomes less of an empathetic character from her fellow colonists’ perspective. If anything, the feeling that grows as more is revealed is pity and frustration.

The other review is from the Tor.com imprint and the first book acquired by my pal Justin Landon. The book? The supremely fun and engaging short novel The Builders by Daniel Polansky, 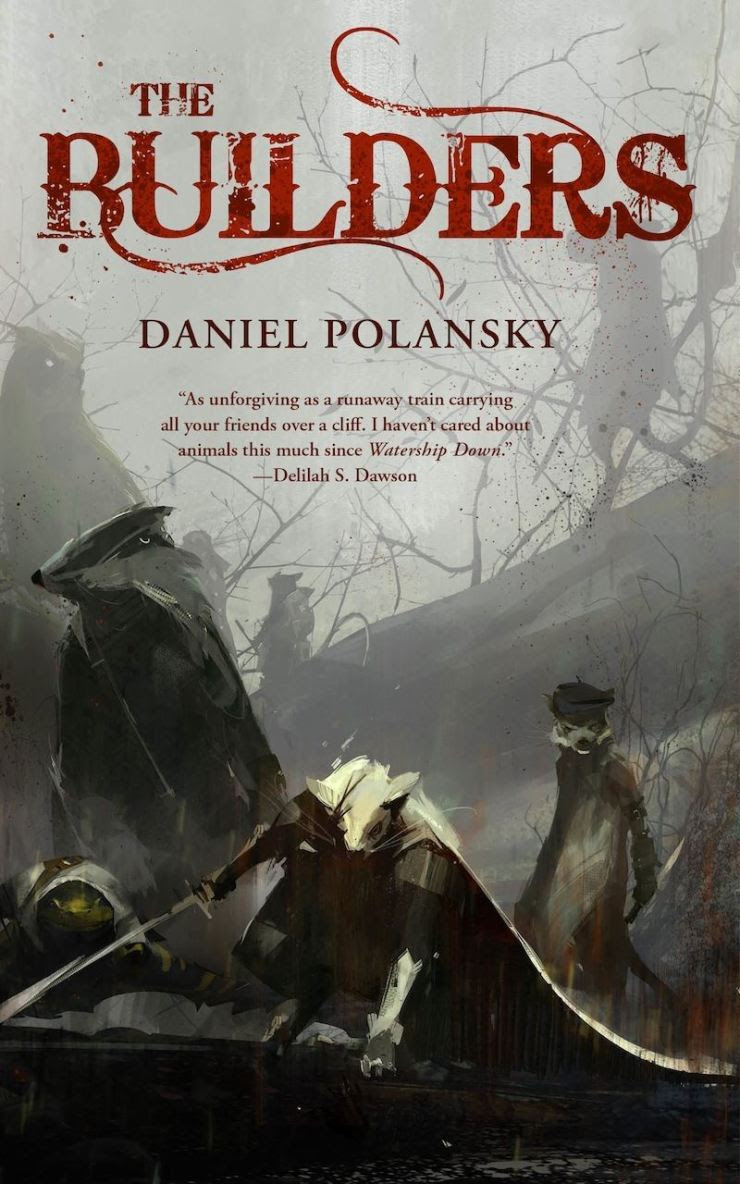 The story begins in a bar where the Captain (just the Captain, no other name is needed) awaits the return of his allies. As each of the players are introduced, Polansky reveals small details about each character. After the Captain, Polansky introduces perhaps the most over-the-top character: Bonsoir the stoat. Because a talking mouse with an eye-patch named simply the Captain isn’t over-the-top enough. As the narrative indicates, there are many animals like a stoat, but stoats are unique. To say the stoat has a flair for the dramatic is to say the sun gives off light; the sun is unavoidable in life and Bonsoir is unavoidable in this story. As it should be.
…
There’s a philosophical question at the heart of this story too, can people change? Are we always going to revert to our baser natures? Can an individual who was once a killer ever escape that violent past and eschew any violent impulses? The Captain is hoping his former team members can’t, because that is what is required to see this revenge plan to its end. Polansky brings life to that essential question brilliantly through the characters, some give in easily to their past behaviors, others struggle against it.

I was part of the last two Mind Melds over at SF Signal (and will be posting the one I’m curating next week). Last week, my pal Paul Wiemer organized a Mind Meld around Audio books. I gushed about the audible adaptation of Joe Hill and Gabe Rodriguez’s Locke & Key, Dominion by C.S. Friedman, and Jonathan Maberry’s Patient Zero.

This week, one of the men behind the curtain of SF Signal, JP Frantz, corralled a few of us Mind Melders and asked what our favorite recent reads were. I shouted out Jim Butcher’s The Aeronaut’s Windlass, Cherie Priest’s Borden Dispatches, Bradley P. Beaulieu’s Twelve Kings in Sharakhai, Jason M. Hough’s Zero World, C.J. Cherryh’s Foreigner, and Updraft.

A couple of days ago, something long in the simmering posted. A few months ago, Fred Kiesche, Joe Sherry, Paul Wiemer, Jonah Morse, and The G (of Nerds of a Feather, Flock Together), and I were involved in a twitter conversation about Katherine Kurtz’s Deryni novels, specifically the first one Deryni Rising.

We all decided that we’d do something more formal, like a round-table blog discussion. Well, the G went and posted that mega roundtable discussion over at Nerds of a Feather, Flock Together.

[The G] I think it’s fair to say we all really liked Deryni Rising by Katherine Kurtz--I know I did. But what is it, exactly, that makes this novel hold up so well? I mean, it’s more than 40 years old, but it feels quite modern in many ways. Am I right? Why or why not?

Rob Bedford: In large part, it is Kurtz’s ability to build up the narrative tension as the novel ramped up to the confrontation with Charissa. Good, gripping storytelling survives and continues to draw people in because it keeps people from stepping away from the story. I think it is the simplicity of the story and how elegantly Kurtz constructs the story.

Last, but not least, I reviewed C.A. Higgins’ debut novel Lightless, which really impressed me: 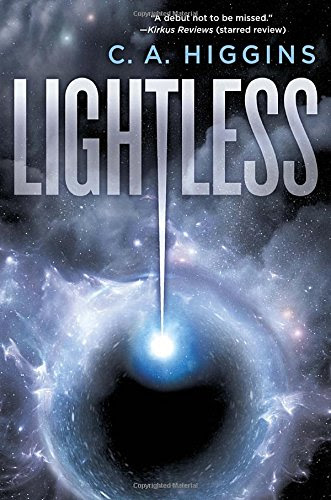 The crew of the Ananke is quite small. Surrounding Althea are Domitian, ship’s captain and Gagnon, the senior scientist. The crew grows by one when Ida Stays, an interrogator from the System, arrives to determine Ivanov and Mattie’s links to Mallt-y-Nos, a galactic terrorist…well, just Ivanov now since Mattie escaped (or was killed according to Althea’s superiors aboard the Ananke). After that chess-board is set-up (about ¼ to 1/3 of the novel), Higgins begins to maneuver her characters in expert fashion. Her characters begin to question what they have come to know and how they view their situation – especially Althea – which makes for a great puzzle of a novel to decipher.

Higgins plays these characters off of each other extremely well with all the interactions floating on an undercurrent of distrust and anger. While Domitian plays a very authoritative figure, he becomes a shadow of a man in the presence of both Ida and Ivanov. He treats Althea as little more than an inexperienced child throughout much of the narrative, perhaps because she is the only person over whom he can hold power.