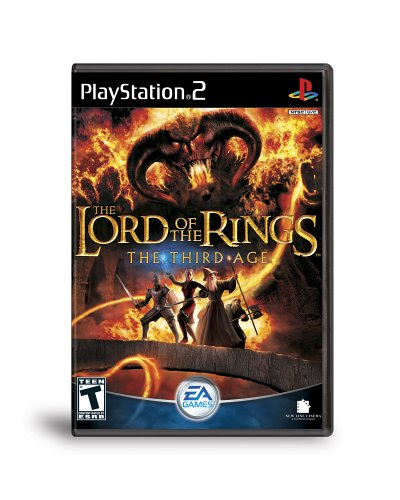 So I’ve become addicted to the PS2 game Lord of the Rings: The Third Age. A beautifully rendered turn based RPG that allows you to shadow the Fellowship for the course of the LOTR story fighting Wargs, Uruk-Hai in Rohan, and Goblins in Moria. Over the course of the game, you meet up with Gandalf, and at one point, he fights along side your party. With all the snowfall this past weekend, a good portion my hours inside the house (i.e. not digging out my car and Mrs. Blog o' Stuff's car) were spent playing the game. This isn’t a game you can sit down and play for just 15 minutes at a time (ala NHL 2005, not that that is a bad thing, mind you), when you play, you have to realize you are dedicating at the very least 45 minutes of your time, which eventually turns into hours at a time.

The game really is an immersive extension of the film and books, Ian McKellen narrates all 100+ cut-scenes from the movie, which help the story along. I only have a couple of minor complaints about the game – one you can’t save your progress at any time, you have to trudge along until you find a checkpoint. The other thing I find a little annoying is the Elven character, who has the powerful healing spells, can only utilize those spells in battle, she can’t cast the healing spells while you are just walking around looking for the next enemy or event, this way if/when you are caught by a group of enemies you don't have to waste a turn healing. However; every time you save the game at a checkpoint, or your character levels up, your Action points (these let you pull off more powerful melee attacks, like three slashes with your sword as opposed to just one) and Hit points are refilled. And then there is the Evil Mode, which allows you to play on the side of Sauron’s Dark Forces. I haven’t tried that part yet. Overall, for LOTR junkies like me and RPG fans anywhere, this really is an absolute must have.

Speaking of LOTR, here are some scenes that didn’t quite make it. There are a lot of images, so it may take some time to load.

Neil Gaiman’s adaptation of Beowulf, to be produced/directed by Robert Zemeckis is moving forward. Those are definitely two creative names I’d like to see on more film/TV projects. Also in Neil news, the Web site for his MirrorMask film has been revamped. In today’s post, Neil also has a really little nice commentary on the Henson company.

The Academy Awards Nominations have been released. Something very strange has happened, Jamie Foxx was nominated for both Best Supporting Actor for Collateral and Best Actor for Ray. I wonder if that has ever happened. I don’t know if it is because there is no Lord of the Rings film, but none of the nominated films or actors/actresses interests me. Eternal Sunshine stars Jim Carrey, whom I don’t really care for, so I didn’t see that one, and I don’ like DiCaprio either, so I likely will not sit through The Aviator. Sideways looks interesting only because of the all the recent buzz about it, especially because guy who played the doofus mechanic on Wings is nominated for Best Supporting Actor, though it does also star Paul Giamatti, the great actor who played Pig Vomit in Howard Stern's Private Parts.

Big year for J.K. Rowling, the 6th Potter book comes out in July, the next Potter film hits theaters this fall/winter and she just gave birth, so congratulations to her.

That'll do for today.