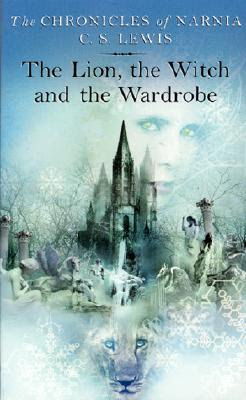 You're The Lion, the Witch and the Wardrobe!

You were just looking for some decent clothes when everything changed quite dramatically. For the better or for the worse, it is still hard to tell. Now it seems like winter will never end and you feel cursed. Soon there will be an epic struggle between two forces in your life and you are very concerned about a betrayal that could turn the balance. If this makes it sound like you're re-enacting Christian theological events, that may or may not be coincidence. When in doubt, put your trust in zoo animals.
Take the Book Quiz
at the Blue Pyramid.

I definitely can think of worse books. I read this series for the first time a few years ago and really enjoyed them. The novelization of the above comes out this coming Christmas, and as it is a relatively short novel, I'll probably re-read it..

Though I haven’t read anything by the man, it is worth noting the passing of Will Eisner (NY TIMES, Newsarama). When a guy nearly every comic creator (Neil Gaiman, Brian Michael Bendis, Mark Evanier, Frank Miller, just to name a few) points to as influential, and he was, it is hard to argue. Eisner was writing and drawing BEFORE Bob Kane and up until his death. Eisner created the term and form of the Graphic Novel. The guy has the most prestigous award in the Comic Book Industry named after him.

On the good side of things, the Batman news continues to be Very Good – The New York Times reports Frank Miller will be writing All-Star Batman (via Franklin's Findings). Newsarama also has a nice page dedicated to the annoucement, with a couple of pieces of artwork from Jim Lee, announced weeks ago to be the artist on this title. See my post from Mid-December about the goodies DC is releasing in anticpation of Batman Begins.

Dammit dammit dammit! I knew I neglected one book on My Favorite novels s of 2004 post – The Warrior-Prophet by R. Scott Bakker. Here's a blurb from my Official SFFWorld Review of the book:

The second novel in R. Scott Bakker’s The Prince of Nothing saga continues to push the envelope in terms of complexity and tension. The Holy War begun in The Darkness that Comes Before continues to sweep the world of Eärwa. The following of Anusûrimbor Kellhus, the titular Warrior Prophet, grows, just as the opposition to what he represents, grows in size. Kellhus is a conundrum, part Christ-figure, part Buddha-figure, some feel he is a harbinger of the impending doom set to sweep the world, others feel he is the savior who will prevent the destruction of the world.

Scott is a cool, super-smart guy and is probably mourning the loss of the NHL season like I am. I reviewed the Canadian edition of The Darkness that Comes Before, and when it was published in the US by Overlook Press, the following blurb from my Official SFFWorld review adorned the back cover:

"I jokingly hesitate to truly call this a work of fantasy considering how absolutely convincing this novel reads as a historical account... Bakker… clamps his hand over yours and simply does not let go… Amid the cluttered shelves of the Epic Fantasy genre, Bakker is a name that stands out amongst, not just the new writers in the crowd, but established and recognized names."

All self-promoting aside, this guy really knows how to write and create stories and worlds. While not a Tolkien imitator, Mr. Bakker has taken the spirit of storytelling and world-building Tolkien invested in LOTR and run with the ball.

Sometimes, the blog just writes itself.