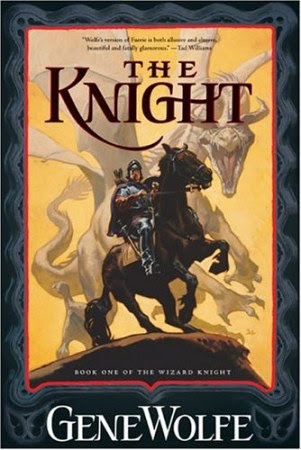 So I finished up The Knight, the first part of Gene Wolfe's latest masterpiece of a saga, The Wizard Knight, a couple of days ago and immediately dove headfirst into The Wizard. Combined they are really one single narrative novel The Wizard Knight, and not unlike the way The Lord of the Rings is actually one novel divided into three, by the publishers.

On to the book itself. One thing that always sets Wolfe's work apart is his amazing prose. I don't think I'm making any revelations, at least to those who have rad and enjoyed his work, that no other writers has such complete, artistic grasp of telling stories utilizing the first person narrative.

In another statement that won't reinvent the wheel, and it's an intentional move on the author's part, the work very much evokes the Great Fantasy Novel, The King of Elfland's Daughter. Wolfe's story takes the reader into a more fully developed Fairy/Fantasy land and the protagonist, Sir Able of the High Heart, is more developed as well.

Compared to Wolfe's other works, primarily the 12 "Sun" books, The Wizard Knight reads a bit more accessibly, but is equally as deep and engaging. This is an enchanting, beautiful novel. On the whole, a truly remarkable work of Fantastic Literature.

Decent batch of comics this week, too. The Flash was a solid issue profiling the rogue Heat Wave, Kurt Busiek is continuing his great interpretation of Howard's Conan, Mark Waid continues to shows readers why it will be a sad day when he leaves Fantastic Four. However, the strongest issue in the batch this week was without a doubt the conclusion of Morrison & Quietly's amazing, emotional WE3. Cybernetic dogs can move the emotions, and these two master storytellers proved it.