Oath of Fealty, Eclipse, and Hawkmoon at SFfWorld

We’ve been cranking out the reviews lately at SFFWorld, with another three this past week, one from me, one from Dan, and one from Art.

Elizabeth Moon should be a familiar name to readers of Fantasy and Science Fiction. For me, Oath of Fealty is the first book of hers that I’ve read, but based on that experience, it likely won’t be my last. Mrs. Moon launched her career with The Deed of Paksennarion trilogy and this is her return to the milieu after a two decade absence:

Through her characters, Moon makes the world breathe and come alive. The magic is handled particularly well in that it isn’t thrown around as simply another tool or a means to an end. It is treated with respect and in many cases, fear. This is particularly true in the case of Dorrin and her connection to magic. Here, Moon provides a good balance between curiosity and fear – fear of abusing the power, fear of becoming seduced by it, and fear of becoming like the people of her clan who banished her.

While I can’t compare Oath of Fealty to the earlier books set in this world in any way, I can say the book was well written and really had me hooked once Dorrin fully asserted herself as Duke. It was an exhilarating scene and the sense of nervousness Dorren felt was counterbalanced by her own assertiveness when she finally made her power as Duke known to those who challenged it. While this occurred towards the middle of the book, it carried on very nicely through to the end of the novel.

Dan continued his trek through the Strahan-edited annual anthology series with Eclipse Three:

Strahan spends his introduction discussing book covers so we must rely on the back cover blurb to determine this volume contains stories where strange and wonderful things happen – where reality is eclipsed by something magical and new.

Don’t Mention Madagascar, Pat Cadigan
This is what happens when a very determined young woman discovers a photograph of the Rolling Stones as they were in the 1960s, except that the young woman’s mother and aunt are in the picture. The difficulty is that the two women in the picture are as aged as they should be in 2009 and both have been absent from this world for a few years now. The detective work is both lucky and solid as two friends try to run down the reality or lack thereof in the photograph. What they find is magical and new and not quite what they expected.

Art (aka Banger) returns to the reviewing game with a look at a classic Moorcock novel reissued by Tor, The Jewel in The Skull (Hawkmoon): 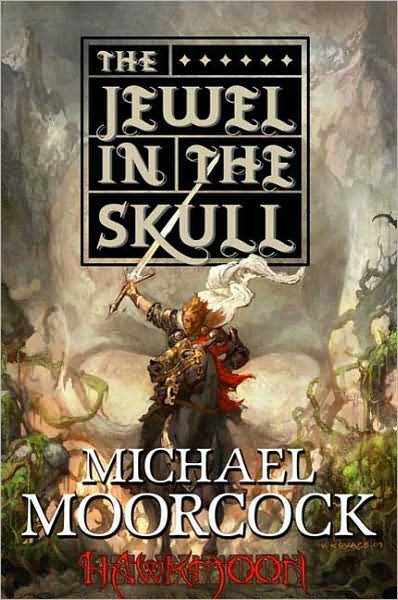 The setting here, an ancient, alternate universe Europe, is reminiscent of Conan the Barbarian's Hyborian world, as are its characters: heroic and brutal, intelligent and savage, clear of conscience and ruthless in its execution. This is the world of Baron Meliadus, ambitious general of the Granbretan Empire; Count Brass, wise and clever Lord Guardian of Karmag, one of the few free cities left in Europe; and of Dorian Hawkmoon, captured rebel leader of the people of Köln, recently annexed to the Granbretan Empire. Eager to conquer Karmag, Meliadus makes a deal with Hawkmoon: if he kidnaps Brass's daughter, the beautiful Yisselda, and brings her back to the Granbretan capital of Londra, Meliadus will restore Hawkmoon as Duke of Köln – subject to the overlordship of Granbretan, of course. To ensure that Hawkmoon keeps up his part of the deal, Meliadus implants in Hawkmoon's forehead a jewel that allows Granbretan to see whatever Hawkmoon sees, and, should they see betrayal, enables them to destroy his mind in an instant, no matter where he is.