Another week of review books here at the o’ Stuff The Shira Calpurnia novels tell the story of Shira Calurnia, a member of the Adeptus Arbites who is transferred to the Hydrapur system. This system is of major importance for the Imperium, being a major port of the Imperial Navy. It is a place of high society, proper etiquette, countless intrigues, and assassins and murderers who hide behind the thin veneer of civilization. Enforcer Shira Calpurnia maintains a tough line on law and order in the Hydraphur system. Home to Imperial warfleets, this area of space is riven with violence and corruption. Calpurnia's duty is to protect the innocent and punish the guilty - with extreme prejudice. This omnibus collects the novels Crossfire, Legacy and Blind as well as new content from Matt Farrer.

The Dervish House by Ian McDonald (Pyr Hardcover 07/10/2010) – McDonald is one of Pyr’s great success stories both in terms of the reissues and new novels – his books and stories have been nominated for quite a few awards and won some others. I thoroughly enjoyed River of Gods, Mark and Art liked Brasyl, and Dan liked Desolation Road

It begins with an explosion. Another day, another bus bomb. Everyone it seems is after a piece of Turkey. But the shockwaves from this random act of 21st century pandemic terrorism will ripple further and resonate louder than just Enginsoy Square.

Welcome to the world of The Dervish House; the great, ancient, paradoxical city of Istanbul, divided like a human brain, in the great, ancient, equally paradoxical nation of Turkey. The year is 2027 and Turkey is about to celebrate the fifth anniversary of its accession to the European Union; a Europe that now runs from the Arran Islands to Ararat. Population pushing one hundred million, Istanbul swollen to fifteen million; Turkey is the largest, most populous and most diverse nation in the EU, but also one of the poorest and most socially divided. It's a boom economy, the sweatshop of Europe, the bazaar of central Asia, the key to the immense gas wealth of Russia and Central Asia.

Gas is power. But its power at a price, and that price is emissions permits. This is the age of carbon consciousness: every individual in the EU has a card stipulating individual carbon allowance that must be produced at every CO2 generating transaction. For those who can master the game, who can make the trades between gas price and carbon trading permits, who can play the power factions against each other, there are fortunes to be made. The old Byzantine politics are back. They never went away.

The ancient power struggled between Sunni and Shia threatens like a storm: Ankara has watched the Middle East emerge from twenty-five years of sectarian conflict. So far it has stayed aloof. A populist Prime Minister has called a referendum on EU membership. Tensions run high. The army watches, hand on holster. And a Galatasary Champions' League football game against Arsenal stokes passions even higher.

The Dervish House is seven days, six characters, three interconnected story strands, one central common core--the eponymous dervish house, a character in itself--that pins all these players together in a weave of intrigue, conflict, drama and a ticking clock of a thriller. 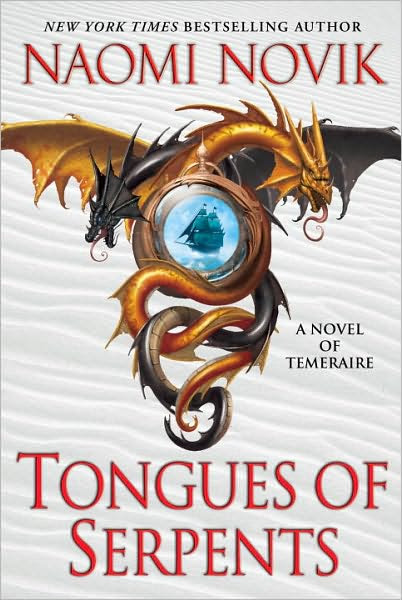 Tongues of Serpents (Temeraire #6) by Naomi Novik (Del Rey, Hardcover 07/13/2010) – This is the sixth book of in Novik’s popular Dragons-in-Napoleonic-War series. I read the first three when they first hit shelves a few years ago (His Majesty's Dragon, Throne of Jade, Black Powder War) and enjoyed them. I haven’t yet returned, but perhaps soon. This is the on-the-shelf version of the ARC I received back in March

A dazzling blend of military history, high-flying fantasy, and edge-of-your-seat adventure, Naomi Novik’s Temeraire novels, set in an alternate Napoleonic era in which intelligent dragons have been harnessed as weapons of war, are more than just perennial bestsellers—they are a worldwide phenomenon. Now, in Tongues of Serpents, Naomi Novik is back, along with the dragon Temeraire and his rider and friend, Capt. Will Laurence.

Convicted of treason despite their heroic defense against Napoleon’s invasion of England, Temeraire and Laurence—stripped of rank and standing—have been transported to the prison colony at New South Wales in distant Australia, where, it is hoped, they cannot further corrupt the British Aerial Corps with their dangerous notions of liberty for dragons. Temeraire and Laurence carry with them three dragon eggs intended to help establish a covert in the colony and destined to be handed over to such second-rate, undesirable officers as have been willing to accept so remote an assignment—including one former acquaintance, Captain Rankin, whose cruelty once cost a dragon its life.

Nor is this the greatest difficulty that confronts the exiled dragon and rider: Instead of leaving behind all the political entanglements and corruptions of the war, Laurence and Temeraire have instead sailed into a hornet’s nest of fresh complications. For the colony at New South Wales has been thrown into turmoil after the overthrow of the military governor, one William Bligh—better known as Captain Bligh, late of HMS Bounty. Bligh wastes no time in attempting to enlist Temeraire and Laurence to restore him to office, while the upstart masters of the colony are equally determined that the new arrivals should not upset a balance of power precariously tipped in their favor.

Eager to escape this political quagmire, Laurence and Temeraire take on a mission to find a way through the forbidding Blue Mountains and into the interior of Australia. But when one of the dragon eggs is stolen from Temeraire, the surveying expedition becomes a desperate race to recover it in time—a race that leads to a shocking discovery and a dangerous new obstacle in the global war between Britain and Napoleon.

Path of the Warrior (Eldar/Warhammer 40,000) by Gav Thorpe (Black Library Mass Market Paperback 07/07/2010) – This book is the launch of a new mini-series set within the vast WH40K universe, which sounds pretty interesting.

The ancient eldar are a mysterious race, each devoting their life to a chosen path which will guide their actions and decide their fate. Korlandril abandons peace for the Path of the Warrior. He becomes a Striking Scorpion, a deadly fighter skilled in the art of close-quarter combat. But the further Korlandril travels down this path, the closer he gets to losing his identity and becoming an avatar of war.

The Way of Kings (Book One of The Stormlilght Archive) by Brandon Sanderson (Tor Hardcover 8/31/2010) – To say that Tor is making a concerted marketing (Facebook Page Tor.com mini-site, etc) push with this book is like saying the ocean is wet. Easily one of my 2 or 3 most anticipated novels of the year. It will also likely be the largest book I read this year, topping out over 1,000 pages.

Widely acclaimed for his work completing Robert Jordan's Wheel of Time saga, Brandon Sanderson now begins a grand cycle of his own, one every bit as ambitious and immersive.

Roshar is a world of stone and storms. Uncanny tempests of incredible power sweep across the rocky terrain so frequently that they have shaped ecology and civilization alike. Animals hide in shells, trees pull in branches, and grass retracts into the soilless ground. Cities are built only where the topography offers shelter.

It has been centuries since the fall of the ten consecrated orders known as the Knights Radiant, but their Shardblades and Shardplate remain: mystical swords and suits of armor that transform ordinary men into near-invincible warriors. Men trade kingdoms for Shardblades. Wars were fought for them, and won by them.

One such war rages on a ruined landscape called the Shattered Plains. There, Kaladin, who traded his medical apprenticeship for a spear to protect his little brother, has been reduced to slavery. In a war that makes no sense, where ten armies fight separately against a single foe, he struggles to save his men and to fathom the leaders who consider them expendable.

Brightlord Dalinar Kholin commands one of those other armies. Like his brother, the late king, he is fascinated by an ancient text called The Way of Kings. Troubled by over-powering visions of ancient times and the Knights Radiant, he has begun to doubt his own sanity.

Across the ocean, an untried young woman named Shallan seeks to train under an eminent scholar and notorious heretic, Dalinar's niece, Jasnah. Though she genuinely loves learning, Shallan's motives are less than pure. As she plans a daring theft, her research for Jasnah hints at secrets of the Knights Radiant and the true cause of the war.

The result of over ten years of planning, writing, and world-building, The Way of Kings is but the opening movement of the Stormlight Archive, a bold masterpiece in the making.

Life before death.
Strength before weakness.
Journey before Destination.

and return to men the Shards they once bore.

The Knights Radiant must stand again.

The Office of Shadow by Matthew Sturges (Pyr Hardcover 06/03/2010) – I enjoyed the first novel in this sequence Midwinter, so it’s nice to see another book following the crossing worlds of the Seelie Courts and our world

Midwinter has gone, but that cold season has been replaced by a cold war in the world of Faerie, and this new kind of war requires a new kind of warrior.

Seelie forces drove back Empress Mab at the Battle of Sylvan, but hostilities could resume at any moment. Mab has developed a devastating new weapon capable of destroying an entire city, and the Seelie have no defense against it. If war comes, they will almost certainly be defeated.

In response, the Seelie reconstitutes a secret division of the Foreign Ministry, unofficially dubbed the "Office of Shadow," imbuing it with powers and discretion once considered unthinkable. They are a group of covert operatives given the tasks that can't be done in the light of day: secretly stealing the plans for Mab's new weapon, creating unrest in the Unseelie Empire, and doing whatever is necessary to prevent an unwinnable war.

The new leader of the "Shadows" is Silverdun. He's the nobleman who fought alongside Mauritane at Sylvan and who helped complete a critical mission for the Seelie Queen Titania. His operatives include a beautiful but naïve sorceress who possesses awesome powers that she must restrain in order to survive and a soldier turned scholar whose research into new ways of magic could save the world, or end it.

They'll do whatever is required to prevent a total war: make a dangerous foray into a hostile land to retrieve the plans for Mab's weapon; blackmail a king into revolting against the Unseelie Empire; journey into the space between space to uncover a closely guarded secret with the power to destroy worlds.