It's been five months since marketing manager Katherine "Kitty" Katt started working with the aliens from Alpha Centauri, and she and Jeff Martini are getting closer. But when an experimental spacecraft is mysteriously returned to the Kennedy Space Center, Kitty and the rest of her team are called in to investigate. Now the team must survive murderous attacks, remove a space entity from a group of astronauts, and avoid an unhinged woman with a serious crush on Kitty's high school boyfriend. And that's all before evil masterminds decide Kitty's extermination is vital.

The Wolf Age (Morlock the Maker #3) by James Enge (Pyr Trade Paperback 10/22/2010) – I read the first Morlock novel, The Blood of Ambrose, which didn’t completely work for me at the time, but I thought Enge was somebody who I’d want to try again. Even thought this is one of those popular "hooded figure" covers, I like it quite a bit.

Wuruyaaria: city of werewolves, whose raiders range over the dying northlands, capturing human beings for slaves or meat. Wuruyaaria: where a lone immortal maker wages a secret war against the Strange Gods of the Coranians. Wuruyaaria: a democracy where some are more equal than others, and a faction of outcast werewolves is determined to change the balance of power in a long, bloody election year.

Their plans are laid; the challenges known; the risks accepted. But all schemes will shatter in the clash between two threats few had foreseen and none had fully understood: a monster from the north on a mission to poison the world, and a stranger from the south named Morlock Ambrosius.

The Greyfriar (Vampire Empire Book 1) by Clay & Susan Griffith (Pyr Trade Paperback 11/08/2010) – I’ll be posting a review of this one in a week or so, but the short of it was I enjoyed the book despite its predictability. Here’s the back cover copy:

In the year 1870, a horrible plague of vampires swept over the northern regions of the world. Millions of humans were killed outright. Millions more died of disease and famine due to the havoc that followed. Within two years, once-great cities were shrouded by the gray empire of the vampire clans. Human refugees fled south to the tropics because vampires could not tolerate the constant heat there. They brought technology and a feverish drive to reestablish their shattered societies of steam and iron amid the mosques of Alexandria, the torrid quietude of Panama, or the green temples of Malaya.

It is now 2020 and a bloody reckoning is coming.

Princess Adele is heir to the Empire of Equatoria, a remnant of the old tropical British Empire. She is quick with her wit as well as with a sword or gun. She is eager for an adventure before she settles into a life of duty and political marriage to a man she does not know. But her quest turns black when she becomes the target of a merciless vampire clan. Her only protector is the Greyfriar, a mysterious hero who fights the vampires from deep within their territory. Their dangerous relationship plays out against an approaching war to the death between humankind and the vampire clans.

Vampire Empire: The Greyfriar is the first book in a trilogy of high adventure and alternate history. Combining rousing pulp action with steampunk style, Vampire Empire brings epic political themes to life within a story of heartbreaking romance, sacrifice, and heroism. 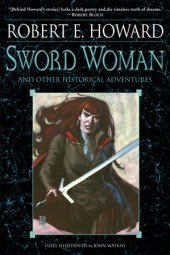 > Sword Woman and Other Historical Adventures by Robert E. Howard (Del Rey Trade Paperback 01/25/2011) – Del Rey is making every effort to ensure ALL of Howard’s fiction is in print, this is their latest offering.

The immortal legacy of Robert E. Howard, creator of Conan the Cimmerian, continues with this latest compendium of Howard’s fiction and poetry. These adventures, set in medieval-era Europe and the Near East, are among the most gripping Howard ever wrote, full of pageantry, romance, and battle scenes worthy of Tolstoy himself. Most of all, they feature some of Howard’s most unusual and memorable characters, including Cormac FitzGeoffrey, a half-Irish, half-Norman man of war who follows Richard the Lion-hearted to twelfth-century Palestine—or, as it was known to the Crusaders, Outremer; Diego de Guzman, a Spaniard who visits Cairo in the guise of a Muslim on a mission of revenge; and the legendary sword woman Dark Agnès, who, faced with an arranged marriage to a brutal husband in sixteenth-century France, cuts the ceremony short with a dagger thrust and flees to forge a new identity on the battlefield.

Lavishly illustrated by award-winning artist John Watkiss and featuring miscellanea, informative essays, and a fascinating introduction by acclaimed historical author Scott Oden, Sword Woman and Other Historical Adventures is a must-have for every fan of Robert E. Howard, who, in a career spanning just twelve years, won a place in the pantheon of great American writers. 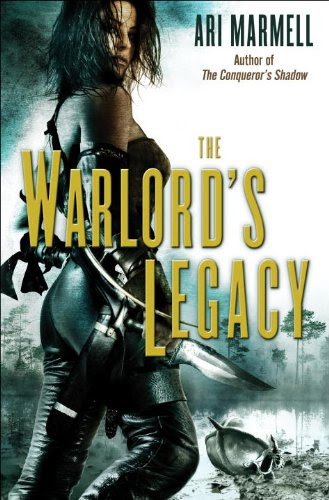 The Warlord's Legacy (Corvis Rebaine Book 2) by Ari Marmell (Bantam Spectra Mass Market Hardcover 01/25/2011) – The first novel in this series, The Conqueror’s Shadow, caught me by surprise early last year. I enjoyed the novel a lot more than I expected I would so the sequel is quite welcome:

Corvis Rebaine, the Terror of the East, a man as quick with a quip as he is with a blade, returns in this highly anticipated sequel to Ari Marmell’s acclaimed The Conqueror’s Shadow, a debut hailed for its refreshing take on dark fantasy and surprising flashes of sharp, sarcastic wit. Now Marmell raises the stakes in a story that has all the humor and excitement of its predecessor, plus a terrifying new villain so evil that he may well be a match for Rebaine himself.

For let’s not forget how Corvis Rebaine came by the charming nickname “Terror of the East.” Certainly no one else has forgotten. Corvis Rebaine is no hero. In his trademark suit of black armor and skull-like helm, armed with a demon-forged axe, in command of a demonic slave, and with allies that include a bloodthirsty ogre, Rebaine has twice brought death and destruction to Imphallion in pursuit of a better, more equitable and just society. If he had to kill countless innocents in order to achieve that dream, so be it.

At least that was the old Rebaine. Before he slew the mad warlord Audriss. Before he banished the demon Khanda. Before he lost his wife and children, who could not forgive or forget his violent crimes. Now, years later, Rebaine lives in a distant city, under a false name, a member of one of the Guilds he despises, trying to achieve change nonviolently, from within the power structure.

Not even when the neighboring nation of Cephira invades Imphallion and the bickering Guilds prove unable to respond does Rebaine return to his old habits of slaughter. But someone else does. Someone wearing Rebaine’s black armor and bearing what appears to be his axe. Someone who is, if anything, even less careful of human life than Rebaine was.

Now Baron Jassion, Rebaine’s old nemesis, is hunting him once more, aided by a mysterious sorcerer named Kaleb, whose powers and secrets make him a more dangerous enemy than Rebaine has ever known. Even worse, accompanying them is a young woman who hates Corvis Rebaine perhaps more than anyone else: his own daughter, Mellorin. Suddenly Rebaine seems to have no choice. To clear his name, to protect his country, and to reconcile with his family, must he once again become the Terror of the East?

The child conceived by the mortal Taki and the demoness Makie, fellow Black Guard agents whose job it is to preserve the peace between human and demonkind, is about to be born. Many see the upcoming birth as a sign of hope that the child will bring together the demon and human worlds in a new era of lasting peace. For the Shu family, however, which thrives on chaos and destruction, this is the last thing they desire.

The infamous demon mob, silent for thousands of years, will stop at nothing to prevent this child from entering the world. With magic snake handlers and fire-spitting demons at their beck and call, the Shus throw everything they have at Taki and the Black Guard in order to stop an event that has been predicted for centuries

The Barsoom Project (Dream Park #2)by Larry Niven and Steven Barnes (Tor Trade Paperback 11/22/2010) Sequel to the author’s popular Locus-nominated novel Dream Park:
Nothing is what it seems at Dream Park, the state-of-the-art amusement park of the future, where customers live out the adventures of a lifetime. What nobody counts on are double agents and live ammunition in the place where dreams and death come true.

Thirteen Years Later (The Danilov Quintet #2) by Jasper Kent (Bantam Spectra, Trade Paperback 02/07/2011) – The venerable Hobbit has reviewed this one for SFFWorld earlier in the year and is a big fan of the writer. He and Pat (he of the Fantasy Hotlist) conducted an interview with Mr. Kent about a month ago. Here’s the back cover copy of the book:


Aleksandr made a silent promise to the Lord. God would deliver him – would deliver Russia – and he would make Russia into the country that the Almighty wanted it to be. He would be delivered from "the pestilence that walketh in darkness ... " and "the destruction that wasteth at noonday ... the terror by night..."

1825, Europe – and Russia – have been at peace for ten years. Bonaparte is long dead and the threat of invasion is no more. For Colonel Aleksei Ivanovich Danilov, life is peaceful. Not only have the French been defeated but so have the twelve monstrous creatures he once fought alongside, and then against, ten or more years ago. His duty is still to serve and to protect his tsar, Aleksandr the First, but now the enemy is human.

However the Tsar knows that he can never be at peace. Of course, he is aware of the uprising fermenting within the Russian army – among his supposedly loyal officers. No, what troubles him is something that threatens to bring damnation down upon him, his family, and his country. The Tsar has been reminded of a promise: a promise born of blood, a promise that was broken a hundred years before.

Now the one who was betrayed by the Romanovs has returned to exact revenge for what has been denied him. And for Aleksei, knowing this chills his very soul. For it seems the vile pestilence that once threatened all he believed in and all he held dear has returned, thirteen years later…

Love and Rockets by Martin H. Greenberg and Kerrie Hughes (Daw Mass Market Paperback 12/7/2010) – The monthly-themed DAW anthology is about romance in space and has an introduction by Lois McMaster Bujold.

Space...the final frontier. Or is it? Many say there's no frontier more forbidding than a romantic relationship between a man and a woman. But what if one's a human, and the other's an alien? Here is an original collection of space opera stories where authors take love (unrequited or not), on a spaceship, space station, or planetary colony, and add enough drama, confusion and mayhem to ensure that the path to true love-or short-term infatuation-is seldom free of obstacles.