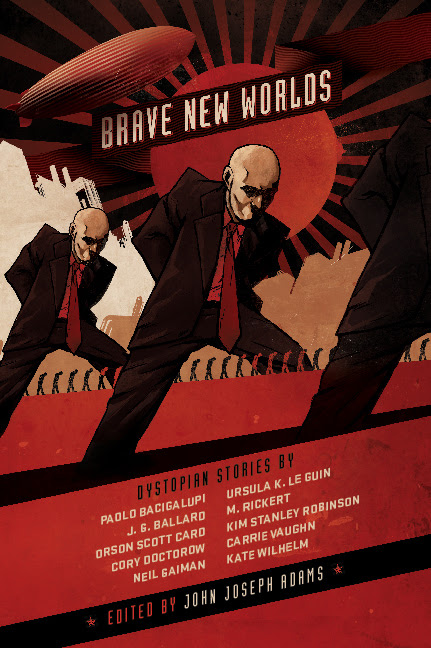 Brave New Worlds by John Joseph Adams (Trade Paperback 1/11/2011 Night Shade Books) – Mr. Adams is one of the preeminent anthology editors in the genre, he has a real knack for pulling together great stories on a specific theme.

YOU ARE BEING WATCHED.

In his smash-hit anthologies Wastelands and The Living Dead, acclaimed editor John Joseph Adams showed you what happens when society is utterly wiped away. Now he brings you a glimpse into an equally terrifying future — what happens when civilization invades and dictates every aspect of your life? From 1984 to The Handmaid’s Tale, from Children of Men to Bioshock, the dystopian imagination has been a vital and gripping cautionary force. Brave New Worlds collects the best tales of totalitarian menace by some of today’s most visionary writers, including Neil Gaiman, Orson Scott Card, Kim Stanley Robinson, and Ursula K. Le Guin.

When the government wields its power against its own people, every citizen becomes an enemy of the state. Will you fight the system, or be ground to dust beneath the boot of tyranny?

The Horns of Ruin by Tim Akers (Trade Paperback 11/19/2010 Pyr) – This is Akers; second novel and a book that looks like a lot of steampunky fun.


Eva Forge is the last paladin of a dead God. Morgan, God of battle and champion of the Fraterdom, was assassinated by his jealous brother, Amon. Over time, the Cult of Morgan has been surpassed by other gods, his blessings ignored in favor of brighter technologies and more mechanical miracles. Eva was the last child dedicated to the Cult of Morgan, forsaken by her parents and forgotten by her family. Now she watches as her new family, her Cult, crumbles all around her.

When a series of kidnappings and murders makes it clear that someone is trying to hasten the death of the Cult of Morgan, Eva must seek out unexpected allies and unwelcome answers in the city of Ash. But will she be able to save the city from a growing conspiracy, one that reaches back to her childhood, even back to the murder of her god?

Another action-packed adventure from the new master of fantasy. The Raven travel to a new continent in search of mages to help the ruined college of Julatsa rebuild and find themselves in the midst of an ancient curse—a curse that has unleashed a plague that threatens to wipe out the elven race. Barclay excels with another tale that pitches The Raven against the clock and unseen foes. Full of desperate fights and secret betrayals, the story also fills in more of Balaia's history and delves deeper into the ancient emnities between the colleges. Barclay has created a wonderfully appealing group of heroes, and with every book their history grows and the land they live in becomes wider and richer. This is landmark fantasy in the making.

Shadowheart (Legends of the Raven #2) by James Barclay (Pyr Trade Paperback 12/15/2010) – What I said above, except this is the second in the second series. Like the previous, you can see the great cover by Raymond Swanland.

James Barclay has rapidly established himself as one of the leading lights of the genre with his two linked trilogies starring fantasy's most popular new heroes in many years: The Raven. The first trilogy was the Chronicles of The Raven and introduced the heroes and the world of Balaia. The second trilogy, The Legends of The Raven, began with Elfsorrow which served as an introduction for new readers. Now, with his fifth book, he tests The Raven to the point of destruction and unleashes a savage war across his world as the magical colleges of Balaia tear the land apart in their struggle for supremacy. Barclay has never been scared of killing off favourite characters, and this has given his books their unique edge. Now he threatens to destroy everything they have known. Can The Raven even survive, let alone triumph?

Of Blood and Honey by Stina Leicht (Night Shade Books Trade Paperback 03/17/2011) – Debut novel and first of a trilogy.

Fallen angels and the fey clash against the backdrop of Irish/English conflicts of the 1970s in this stunning debut novel by Stina Leicht.

Liam never knew who his father was. The town of Derry had always assumed that he was the bastard of a protestant--His mother never spoke of him, and Liam assumed he was dead.

But when the war between the fallen, and the fey began to heat up, Liam and his family are pulled into a conflict that they didn't know existed. A centuries old conflict between supernatural forces seems to mirror the political divisions in 1970s era Ireland, and Liam is thrown headlong into both conflicts.

Only the direct intervention of Liam's real father, and a secret catholic order dedicated to fighting "The Fallen" can save Liam... from the mundane and supernatural forces around him, and from the darkness that lurks within hi