Back to a big batch this week, with some really nice looking stuff from Night Shade Books

The Winds of Khalakovo (The Lays of Anuskaya Book One) by Bradley P. Beaulieu (Night Shade Books Trade Paperback 04/05/2011) – Beaulieu’s novel-writing career launches with this book, itself the first in a series. What a gorgeous cover, which looks to have a good story inside:

Among inhospitable and unforgiving seas stands Khalakovo, a mountainous archipelago of seven islands, its prominent eyrie stretching a thousand feet into the sky. Serviced by windships bearing goods and dignitaries, Khalakovo's eyrie stands at the crossroads of world trade. But all is not well in Khalakovo. Conflict has erupted between the ruling Landed, the indigenous Aramahn, and the fanatical Maharraht, and a wasting disease has grown rampant over the past decade. Now, Khalakovo is to play host to the Nine Dukes, a meeting which will weigh heavily upon Khalakovo's future.
When an elemental spirit attacks an incoming windship, murdering the Grand Duke and his retinue, Prince Nikandr, heir to the scepter of Khalakovo, is tasked with finding the child prodigy believed to be behind the summoning. However, Nikandr discovers that the boy is an autistic savant who may hold the key to lifting the blight that has been sweeping the islands. Can the Dukes, thirsty for revenge, be held at bay? Can Khalakovo be saved? The elusive answer drifts upon the Winds of Khalakovo... 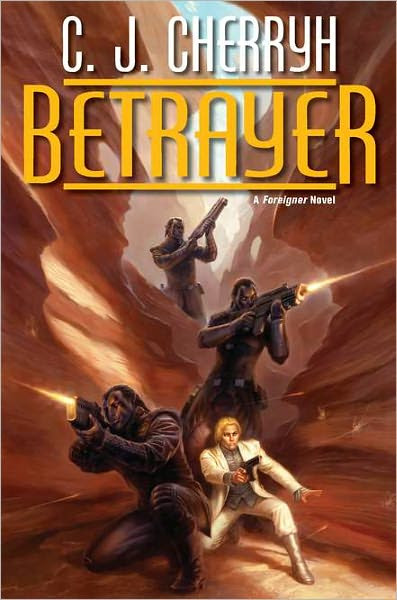 Betrayer (Foreigner #12) by C. J. Cherryh (DAW Hardcover 05/04/2010) – If nothing else, Cherryh maintains an impressive schedule of output, this is the 12th in the series for which I received the 11th exactly a year ago.

The civil war among the alien atevi has ended. Tabini-aiji, powerful ruler of the Western Association, along with Cajeiri his son and heir, and his human paidhi, Bren Cameron, have returned to the Bujavid, their seat of power.

But factions that remain loyal to the opposition are still present, and the danger these rebels pose is far from over.

A Matter of Time by Glen Cook (Night Shade Books Trade Paperback 04/05/2011) – As I’ve previously noted, Night Shade is continuing to do a superb job of reissuing Glen Cook’s backlist and keeping a solid “branding” to all of the books. Of special note to me on this book is the cover blurb, which is from my review of Cook’s Darkwar.

May 1975. St. Louis. In a snow-swept street, a cop finds the body of a man who died fifty years ago. It's still warm. July 1866, Lidice, Bohemia: A teenage girl calmly watches her parents die as another being takes control of her body. August 2058, Prague: Three political rebels flee in to the past, taking with them a terrible secret. As past, present, and future collide, one man holds the key to the puzzle. And if he doesn't fit it together, the world he knows will fall to pieces. It's just A Matter of Time! 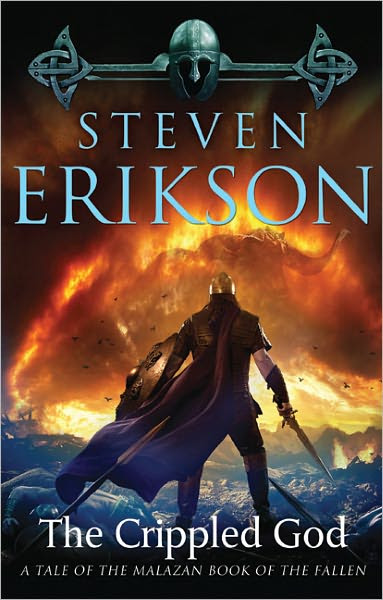 The Crippled God (Malazan Book of the Fallen #10) by Mark Chadbourn (Tor Trade Paperback 03/01/2011) – As I said when I posted last week about this book hitting the NY Times Bestseller list: ‘I'm a few books behind in my reading of the series, but I do enjoy The Malazan Book of the Fallen a great deal. I received a note from Tor books telling me the following. Now I have the final three books, no excuses not to finish up the books right? Well, except for all these other books I keep receiving. Anyway, Owen reviewed the book a couple of weeks ago and liked it a lot

Savaged by the K’Chain Nah’Ruk, the Bonehunters march for Kolanse, where waits an unknown fate. Tormented by questions, the army totters on the edge of mutiny, but Adjunct Tavore will not relent. One final act remains, if it is in her power, if she can hold her army together, if the shaky allegiances she has forged can survive all that is to come. A woman with no gifts of magic, deemed plain, unprepossessing, displaying nothing to instill loyalty or confidence, Tavore Paran of House Paran means to challenge the gods – if her own troops don’t kill her first.

Awaiting Tavore and her allies are the Forkrul Assail, the final arbiters of humanity. Drawing upon an alien power terrible in its magnitude, they seek to cleanse the world, to annihilate every human, every civilization, in order to begin anew. They welcome the coming conflagration of slaughter, for it shall be of their own devising, and it pleases them to know that, in the midst of the enemies gathering against them, there shall be betrayal.

In the realm of Kurald Galain, home to the long lost city of Kharkanas, a mass of refugees stand upon the First Shore. Commanded by Yedan Derryg, the Watch, they await the breaching of Lightfall, and the coming of the Tiste Liosan. This is a war they cannot win, and they will die in the name of an empty city and a queen with no subjects.

Elsewhere, the three Elder Gods, Kilmandaros, Errastas and Sechul Lath, work to shatter the chains binding Korabas, the Otataral Dragon, from her eternal prison. Once freed, she will rise as a force of devastation, and against her no mortal can stand. At the Gates of Starvald Demelain, the Azath House sealing the portal is dying. Soon will come the Eleint, and once more, there will be dragons in the world. 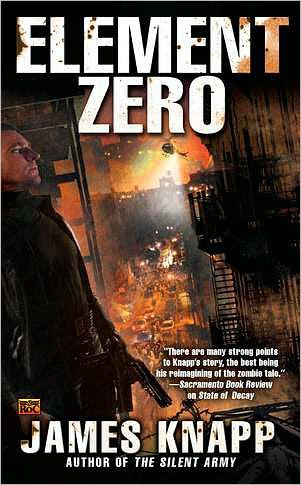 Element Zero (Revivors #3) by James Knapp (Rpc Mass Market Paperback 04/02/2011) – The first in this series State of Decaypublished about a year ago and I finally caught up with it earlier this year and thought it pretty interesting..


Technologically reanimated corpses are frontline soldiers engaged in a neverending war. Agent Nico Wachalowski uncovered a conspiracy that allowed Samuel Fawkes, the scientist who created them, to control them beyond the grave. And now Fawkes has infected untold thousands with new technology, creating an undetectable army that will obey his every command-a living army that just might represent the future of humanity...

What happens when resources become scarce and society starts to crumble? As the competition for resources pulls America's previously stable society apart, the "New Normal" is a Soft Apocalypse. This is how our world ends; with a whimper instead of a bang.
New social structures and tribal connections spring up across America, as the previous social structures begin to dissolve. Soft apocalypse follows the journey across the South East of a tribe of formerly middle class Americans as they struggle to find a place for themselves and their children in a new, dangerous world that still carries the ghostly echoes of their previous lives. 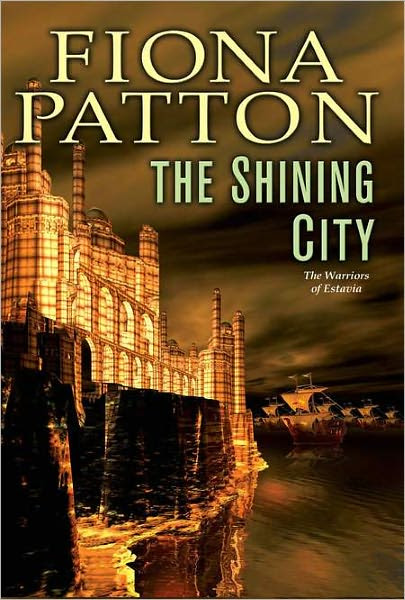 The Shining City: (Book 3 of the Warriors of Estavia by Fiona Patton (DAQ Trade Paperback 04/05/2011) - The concluding volume in Patton’s trilogy:

With the three children of prophecy-the seers Spar and Graize, and the warrior Brax-now grown, and the young God Hisar ready to stake his claim to a place in the pantheon of Anavatan, a time of chaos and change is fast approaching. For only if sworn enemies Spar and Graize can come together as Hisar's priests will the God stand any chance of surviving the coming battles with both the hungry spirits seeking to devour him, and the war with the mortal invasion fleet, which is even now sailing for Anavatan. 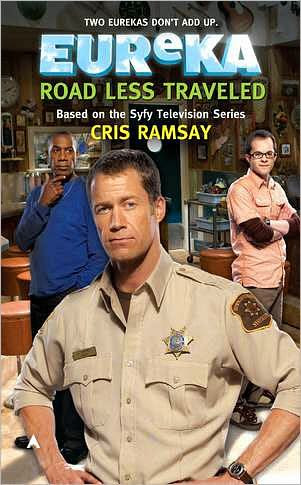 Eureka: Road Less Traveled by Cris Ramsay (Ace, Mass Market Paperback 04/1/2011) – My wife and I are big fans of the show, but I haven’t read any of the novels based on the show, of which this is the third. Ramsay is the house name Ace is using for these books.


A Global Dynamics researcher has a breakthrough on her project visualizing another dimension. And since GD's experiments have a bad tendency to affect the entire town, Sheriff Jack Carter heads over to check it out. What he sees blows him away. The project has revealed a parallel universe, complete with another Eureka-one in which Carter doesn't exist! But as the two worlds begin to bleed into each other and residents confront their alternate selves, Carter may be the one man who can keep both Eurekas from being destroyed. 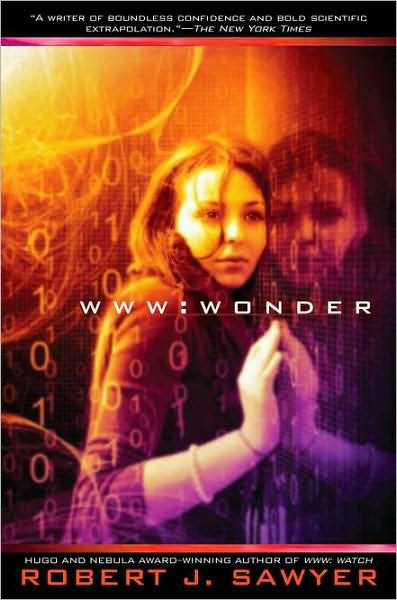 WWW: Wonder (WWW #3) by Robert J. Sawyer (Ace Hardcover 04/06/2010) – I read the first two in the trilogy (WWW: Wake and WWW: Watch); first book was good, second was good too, but a sense of padding began to creep into the narrative for me. Regardless, I’ll be reading this one to see how Sawyer resolves it:

Webmind-the vast consciousness that spontaneously emerged from the infrastructure of the World Wide Web-has proven its worth to humanity by aiding in everything from curing cancer to easing international tensions. But the brass at the Pentagon see Webmind as a threat that needs to be eliminated.

Caitlin Decter-the once-blind sixteen-year-old math genius who discovered, and bonded with, Webmind-wants desperately to protect her friend. And if she doesn't act, everything-Webmind included-may come crashing down. 
THE TOME OF THE UNDERGATES HAS BEEN RECOVERED...

...and the gates of hell remain closed. Lenk and his five companions set sail to bring the accursed relic away from the demonic reach of Ulbecetonth, the Kraken Queen. But after weeks at sea, tensions amidst the adventurers are rising. Their troubles are only beginning when their ship crashes upon an island made of the bones left behind from a war long dead.

And it appears that bloodthirsty alien warrior women, fanatical beasts from the deep, and heretic-hunting wizards are the least of their concerns. Haunted by their pasts, plagued by their gods, tormented by their own people, and gripped by madness personal and peculiar, their greatest foes may yet be themselves.

The reach of Ulbecetonth is longer than hell can hold. 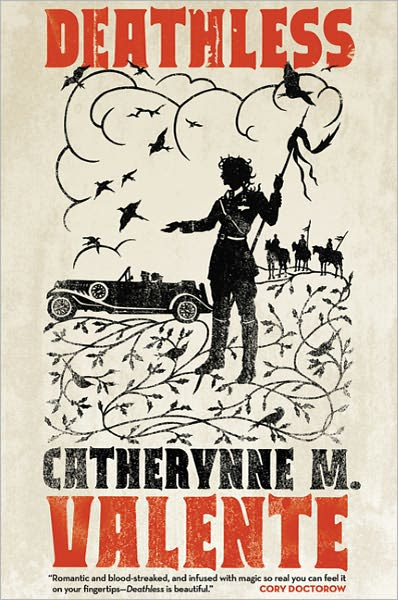 Deathless by Catherynne M. Valente (Tor, Hardcover 03/29/2011) – Valente is very prolific, having published over half-dozen novels in the past 5 years. This is her latest.

Koschei the Deathless is to Russian folklore what devils or wicked witches are to European culture: a menacing, evil figure; the villain of countless stories which have been passed on through story and text for generations. But Koschei has never before been seen through the eyes of Catherynne Valente, whose modernized and transformed take on the legend brings the action to modern times, spanning many of the great developments of Russian history in the twentieth century.

Deathless, however, is no dry, historical tome: it lights up like fire as the young Marya Morevna transforms from a clever child of the revolution, to Koschei’s beautiful bride, to his eventual undoing. Along the way there are Stalinist house elves, magical quests, secrecy and bureaucracy, and games of lust and power. All told, Deathless is a collision of magical history and actual history, of revolution and mythology, of love and death, which will bring Russian myth back to life in a stunning new incarnation.