Two reviews and an interview. First, we’ll start with the interview – Wayne Thomas Batson who was interviewed by KatG. I finished Wayne’s most recent book (Sword in the Stars which is also a subject of the interview) last week and will have the review posted next week.

I reviewed a debut (which is also the start of a trilogy) from Night Shade Books God’s War by Kameron Hurley: 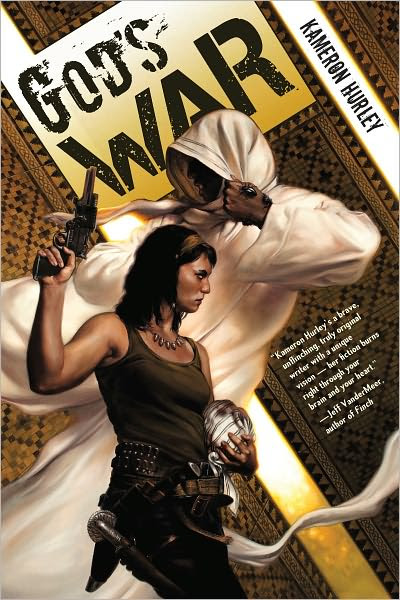 With the ‘bugpunk’ aspect of the novel, two authors immediately came to mind. Adrian Tchaikovsky with his Shadows of the Apt series which features Insect Kinden and Steph Swainston’s much overlooked The Year of Our War. Hurley’s novel is a thicker mix of fantasy and science fiction, with ‘magicians’ on a war-torn distant planet and alien pirates.

The magic that fuels everything on the planet is bugs, and those who can manipulate the bugs to power the technology are the aforementioned magicians. The old Clarke-ism of “sufficiently advanced technology being indistinguishable from magic” could really apply here. The Far Future setting peppered with fantasy tropes also reminded me a bit of Rosemary Kirstein’s Steerswoman novels. Another strong aspect of Hurley’s world-building/storytelling is the world of Umayama itself. Hurley’s playing with standard religions provides a different flavor, as Umayma the planet on which the action takes places was settled by Muslims. I also thought the Nyx’s ‘sisters’ and the whole power sects Hurley set up to be fleshed out nicely.

Readers in the UK are just now getting their first taste of The Lost Fleet Jack Campbell’s popular Military SF series, and the Hobbit Mark dove right into the first book Dauntless

So what we have here is good old traditional mil-space SF, with ships and fleets sailing and battling between worlds, like the old sea vessels of Earth. We have a military power structure based on Navy protocols and no doubt a universe that runs like the Star Trek Federation, albeit split between the two opposing ideologies of Capitalism and Communism through The Alliance and the Syndic.

The strengths of the book are that there is a military feel to them. It is also a book that tries to show how battle would be when dealing with near-FTL speeds – often it is predicting where things will be, the ‘real’ version not being seen for seconds or minutes later. On the scale we look at here battles are lost and won before people actually see the results with their own eyes. This is all done cleverly and logically, giving a realistic feel to otherwise difficult to visualise events.