Another Tuesday, another two-fer. This time, the part of Hobbit will be played by Kathryn…er rather the review comes from her rather than Hobbit. Right…

I’ve been catching up with some books from my to-read stack that have been lingering for a couple of years, the most recent review of which is for Benjamin Tate’s Well of Sorrows which applies fantastical elements (dark magic, elvish and dwarfish creatures, and demons) to the American Colonies and the pioneers who wagon-trained West: 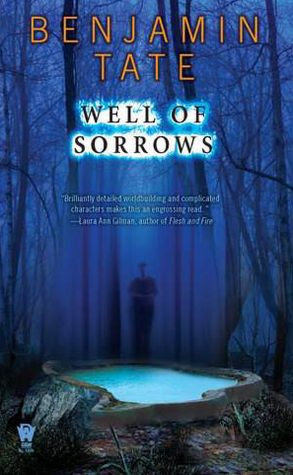 Things go from bad to mildly hopeful when Colin’s father teaches the young boy how to use a sling to defend himself. When Colin confronts Walter and his gang of rouges, he gains a minor victory only to be arrested and grouped in with a bunch of insurgents who started a riot at the docks where Colin’s father is a day worker struggling to get a steady job. As a result of his incarceration and the Lord’s intimations, Colin’s father agrees to help lead a group of families out of the settled area in order to gain Colin’s freedom. Of course, the individual put in charge of the caravan is Walter, Colin’s nemesis. The only true brightspot for Colin during this first chunk of the book is his growing relationship with a girl name Karen, who, as they set out on their pilgrimage, becomes his betrothed.

The world-building, taking the form of a fantasized Colonial America, is realized to the point of being a character on its own. This aspect of the novel is subtle and expertly revealed, Tate introduces the main cast characters and moves them around their small town while they converse about the situation that forced them to make the journey to the New World. As these people leave Portstown and encounter the dangers in the unexplored lands, everything comes across to them as new, which works well to impart the details to the reader. Ciaphas Cain just can't stay out of danger for long. In Dead in the Water, Cain and Jurgen find themselves dispatched to a feral river world occupied by some of the Vostroyan Firstborn. The Firstborn have lost a unit of troops and been unable to recover them, and it's up to Cain to help locate the missing troops, but also to discover who has been at the helm of a wave of killing.

The script is very reminiscent of the short stories that Mitchell has written for Cain, again taking the form of his edited archives, with Inquisitor Vail responsible for turning Cain's post-retirment recollections into coherant stories. I found the similarities with the story made the drama more accessible, as someone new to audio dramas, but it also allowed Toby Longworth and Sandy Mitchell to play to the strengths of the existing Cain stories.