The last batch of review books for 2011… 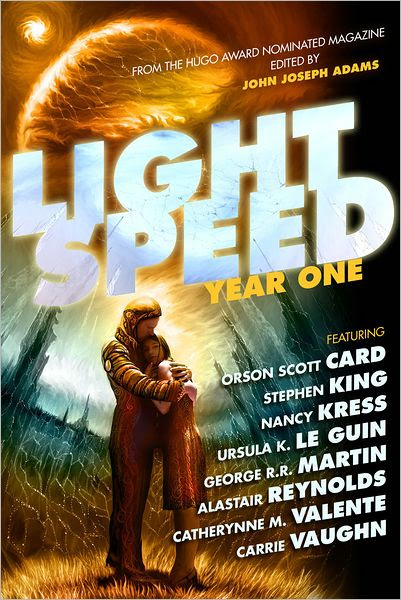 Lightspeed: Year One edited by John Joseph Adams and (Prime Books, Trade Paperback 11/29/2011) – John Joseph Adams is probably the top anthologist (not named Jonathan Strahan and Gardner Dozios) in the genre right now. His careful attention to the stories he selects is very impressive, since he’s been nominated for a couple of awards. This book is both a beautiful book and has some impressive names inside.

Lightspeed (www.lightspeedmagazine.com) is the critically-acclaimed, online science fiction magazine edited by bestselling anthologist John Joseph Adams. Lightspeed publishes all types of science fiction, from near-future, sociological soft sf, to far-future, star-spanning hard sf, and anything and everything in between. Each month, Lightspeed features a mix of originals and reprints, from a variety of authors - from the bestsellers and award-winners you already know to the best new voices you haven''t heard of yet.

Now, in Lightspeed: Year One, you will find all of the fiction published in Lightspeed''s first year, from new stories such as Nebula Award finalists, Vylar Kaftan''s "I'm Alive, I Love You, I'll See You in Reno" and "Arvies" by Adam-Troy Castro, and Carrie Vaughn''s Hugo Award-nominee "Amaryllis," to classic reprints by Stephen King, Ursula K. Le Guin, George R. R. Martin, and more.

Halo: Primordium by Greg Bear (Tor, Hardcover 01/03/2012) – Bear has an extensive career having penned multiple award winning and nominated novels as well as some well-received shared world/media tie ins, including novels in this series.

A long time ago, I was a living, breathing human being. I went mad. I served my enemies. They became my only friends.

Since then, I’ve traveled back and forth across this galaxy, and out to the spaces between galaxies—a greater reach than any human before me.

You have asked me to tell you about that time. Since you are the last true Reclaimer, I must obey. Are you recording? Good. Because my memory is failing rapidly. I doubt I’ll be able to finish the story.

Once, on my birth-world, a world I knew as Erde-Tyrene, and which now is called Earth, my name was Chakas...

In the wake of apparent self-destruction of the Forerunner empire, two humans—Chakas and Riser—are like flotsam washed up on very strange shores indeed.

Captured by the Master Builder, misplaced during a furious battle in space, they now find themselves on an inverted world where horizons rise into the sky, and where humans of all kinds are trapped in a perilous cycle of horror and neglect. For they have become both research animals and strategic pawns in a cosmic game whose madness knows no end—a game of ancient vengeance between the powers who seeded the galaxy with life, and the Forerunners who expect to inherit their sacred Mantle of duty to all living things.

In the company of a young girl and an old man, Chakas begins an epic journey across a lost and damaged Halo in search of a way home, an explanation for the warrior spirits rising up within, and for the Librarian’s tampering with human destiny.

This journey will take them into the Palace of Pain, the domain of a powerful and monstrous intelligence who claims to be the Last Precursor, and who now has control of both this Halo and the fate of Forerunners and Humans alike.

Called the Captive by Forerunners, and the Primordial by ancient human warriors, this intelligence has taken charge of, and retasked, the Master Builder’s cruel researches into the Flood—which it may have itself unleashed on the galaxy more than ten thousand years before.

The Pillars of Hercules by David Constantine (Nightshade Books, Trade Paperback 03/12/2012) – Constantine is a pseudonym for David J. Williams, author of the Autumn Rain trilogy. This one is a historical fantasy of "the ancient world, as it could have been."

Alexander, Prince of Macedon, is the terror of the world. Persia, Egypt, Athens . . . one after another, mighty nations are falling before the fearsome conqueror. Some say Alexander is actually the son of Zeus, king of the gods, and the living incarnation of Hercules himself. Worse yet, some say Alexander believes this . . . .

The ambitious prince is aided in his conquest by unstoppable war-machines based on the forbidden knowledge of his former tutor, the legendary scientist-mage known as Aristotle. Greek fire, mechanical golems, and gigantic siege-engines lay waste to Alexander''s enemies as his armies march relentlessly west--toward the very edge of the world.

Beyond the Pillars of Hercules, past the gateway to the outer ocean, lies the rumored remnants of Atlantis: ancient artifacts of such tremendous power that they may be all that stands between Alexander and conquest of the entire world. Alexander desires that power for himself, but an unlikely band of fugitives-including a Gaulish barbarian, a cynical Greek archer, a cunning Persian princess, and a sorcerer''s daughter-must find it first . . . before Alexander unleashes godlike forces that will shatter civilization. The Pillars of Hercules is an epic adventure that captures the grandeur and mystery of the ancient world as it might have been, where science and magic are one and the same. 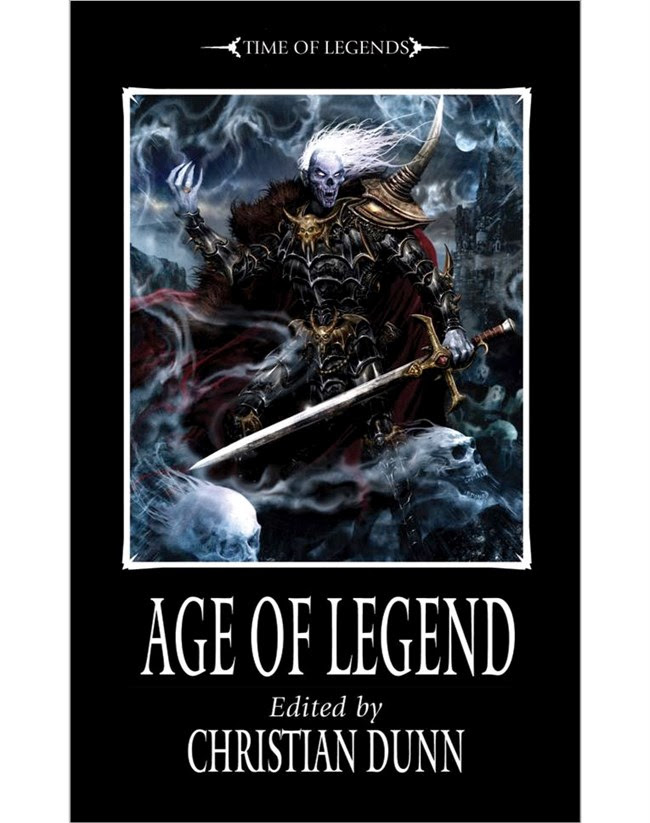 
The dark origins of the Warhammer World are soaked in blood. Epic wars between kindred races reshaped continents, vast civilisations rose and fell, the dead walked the earth in legions. This is an age of mighty heroes whose like will never be seen again, such as the mangod Sigmar and Caledor, the Phoenix King of the elves. It is also an era of dread villains like the Witch-King Malekith and Nagash, the Lord of the undead. In these troubled times, dragons still flock the skies and magic exists that can doom or save the world.

It is an age of legend.
CONTENTS 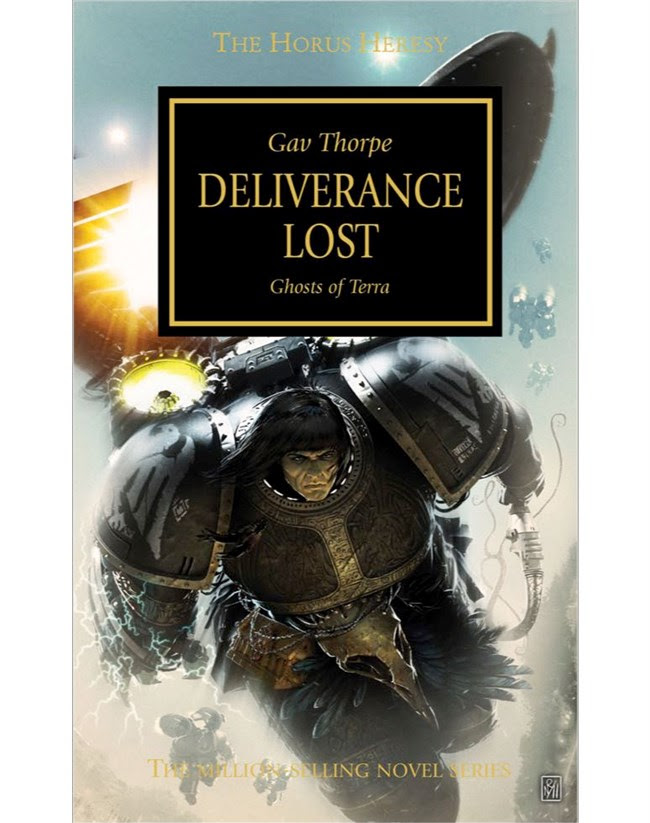 
As the Horus Heresy divides the Imperium, Corax and his few remaining Raven Guard escape the massacre at Isstvan V. Tending to their wounds, the bloodied Space Marines endeavour to replenish their numbers and return to the fray, taking the fight to the traitor Warmaster. Distraught at the crippling blow dealt to his Legion, Corax returns to Terra to seek the aid of his father – the Emperor of Mankind. Granted access to ancient secrets, Corax begins to rebuild the Raven Guard, planning his revenge against his treacherous brother primarchs. But not all his remaining warriors are who they appear to be… the mysterious Alpha Legion have infiltrated the survivors and plan to destroy the Raven Guard before they can rebuild and threaten Horus’s plans. 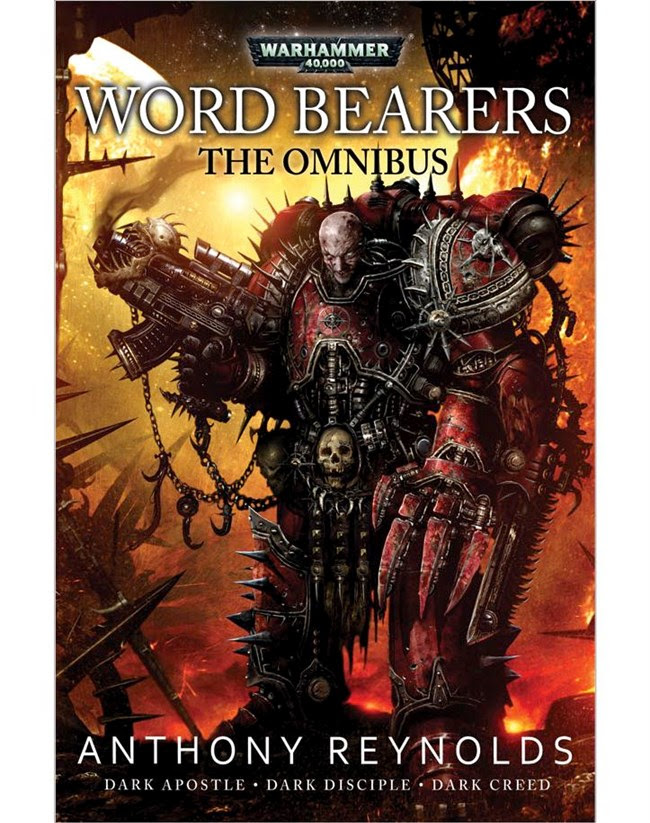 The Word Bearers are among the most feared and reviled of all Chaos Space Marines. Fierce warriors with a fanatical religious zeal, they blaze across the galaxy in the service of their dark gods. Worlds will burn, and entire civilisations will fall before the fury of the XVIIth Legion.

This omnibus is the definitive collection of Anthony Reynolds' popular Word Bearers series, following the cruel exploits and machinations of First Acolyte Marduk and the 34th Host. Gathered together for the first time, the novels Dark Apostle, Dark Disciple and Dark Creed are concluded with the all-new short story Torment.