Another batch of random assortments here at the ‘o Stuff. Have a look, won’t you? 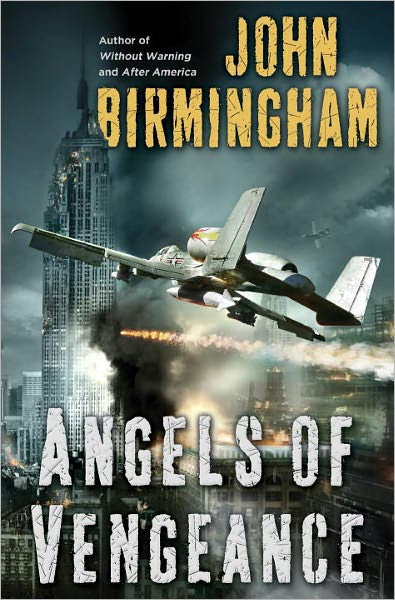 Angels of Vengeance by John Birmingham (Del Rey Hardcover 04/10/2012) – I read Birmingham’s Weapons of Choice when it first published, liked it, but just didn’t return to the series. This book brings to a conclusion the unnamed series begun with Without Warning.

When an inexplicable wave of energy slammed into North America, millions died. In the rest of the world, wars erupted, borders vanished, and the powerful lost their grip on power. Against this backdrop, with a conflicted U.S. president struggling to make momentous decisions in Seattle and a madman fomenting rebellion in Texas, three women are fighting their own battles—for survival, justice, and revenge.

Special agent Caitlin Monroe moves stealthily through a South American jungle. Her target: a former French official now held prisoner by a ruthless despot. To free the prisoner, Caitlin will kill anyone who gets in her way. And then she will get the truth about how a master terrorist escaped a secret detention center in French Guadeloupe to strike a fatal blow in New York City.

Sofia Peiraro is a teenage girl who witnessed firsthand the murder and mayhem of Texas under the rule of General Mad Jack Blackstone. Sofia might have tried to build a life with her father in the struggling remnants of Kansas City—if a vicious murder hadn’t set her on another course altogether: back to Texas, even to Blackstone himself.

Julianne Balwyn is a British-born aristocrat turned smuggler. Shopping in the most fashionable neighborhood of Darwin, Australia—now a fantastic neo-urban frontier—Jules has a pistol holstered in the small of her lovely back. She is playing the most dangerous game of all: waiting for the person who is hunting her to show his face—so she can kill him first.

Three women in three corners of a world plunged into electrifying chaos. Nation-states struggling for their survival. Immigrants struggling for new lives. John Birmingham’s astounding new novel—the conclusion to the series begun in Without Warning and After America—is an intense adventure that races from the halls of power to shattered streets to gleaming new cities, as humanity struggles to grasp its better angels—and purge its worst demons. 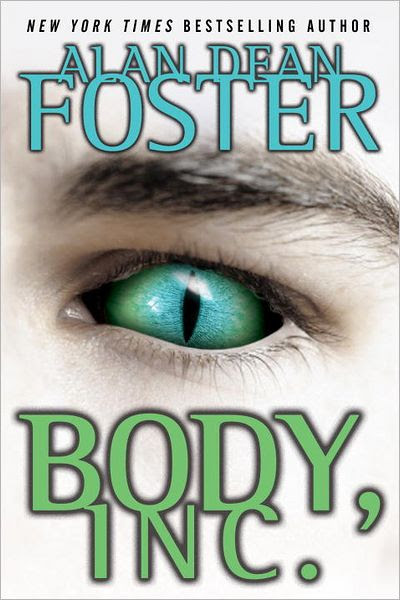 Body, Inc. by Alan Dean Foster (Del Rey 03/27/2012) – I think Alan Dean Foster is neck and neck with Harry Turtledove for the amount of books I’ve received for review over the past few years. Unfortunately, a majority of these books are part of larger series – and deeply into the series at that – so I haven’t jumped into any of the books.

New York Times bestselling author Alan Dean Foster has always been on the cutting-edge of science fiction. In Body, Inc., he creates a tomorrow where genetic manipulation has become ubiquitous, and the very meaning of what it is to be human is undergoing drastic transformation.

In a world deeply wounded by centuries of environmental damage, two unlikely souls join forces: Dr. Ingrid Seastrom has stumbled into a mystery involving quantum-entangled nanoscale implants—a mystery that just may kill her. Whispr is a thief and murderer whose radical body modifications have left him so thin he is all but two-dimensional. Whispr has found a silver data-storage thread, a technology that will make him wealthy beyond his wildest dreams. He is also going mad with longing for Dr. Ingrid Seastrom. Their quest to learn the secrets of the implant and the thread—which may well be the same secret—has led them to the South African Economic Combine, otherwise known as SAEC. Or, less respectfully, SICK. SICK, it seems, has the answers.

Unfortunately, SICK has also got Napun Molé, a cold-blooded assassin whose genetic enhancements make him the equivalent of a small army. Molé has already missed one chance to kill Ingrid and Whispr and now he has followed them to South Africa. This time, he is not only going to succeed, he is going to make them suffer. 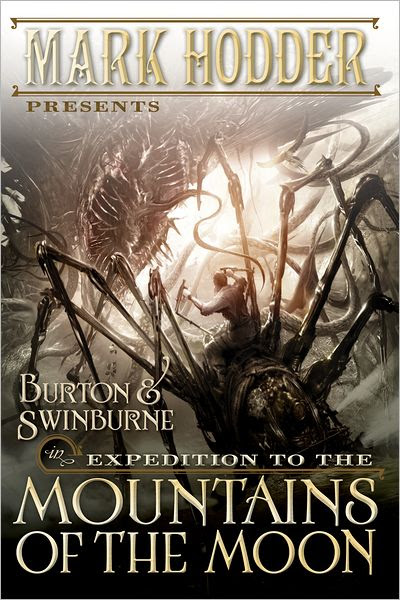 Burton & Swineburne in Expedition to the Mountains of the Moon by Mark Hodder (Pyr, Trade Paperback 01/17/2012) – I read and enjoyed the first in this series, which subsequently received the Philip K. Dick Award. I still haven’t read the second book, but this book brings to conclusion Hodder's popular steampunk trilogy.

It is 1863, but not the one it should be. Time has veered wildly off course, and now the first moves are being made that will lead to a devastating world war and the fall of the British Empire.

The prime minister, Lord Palmerston, believes that by using the three Eyes of Naga—black diamonds possessing unique properties—he’ll be able to manipulate events and avoid the war. He already has two of the stones, but the third is hidden somewhere in the Mountains of the Moon, the fabled source of the Nile.

Palmerston sends Sir Richard Francis Burton to recover it. For the king’s agent, it’s a chance to redeem himself after his previous failed attempt to find the source of the great river. That occasion had led to betrayal by his partner, John Hanning Speke. Now Speke is leading a rival expedition on behalf of the Germans, and it seems that the battle between the former friends may ignite the very war that Palmerston is trying to avoid!

Caught in a tangled web of cause, effect, and inevitability, little does Burton realize that the stakes are far higher than even he suspects.

A final confrontation comes in the mist-shrouded Mountains of the Moon, in war- torn Africa of 1914, and in Green Park, London, where, in the year 1840, Burton must face the man responsible for altering time: Spring Heeled Jack!

Burton and Swinburne’s third adventure is filled with eccentric steam-driven technology, grotesque characters, and bizarre events, completing the three-volume story arc begun in The Strange Affair of Spring Heeled Jack and The Curious Case of the Clockwork Man.

Boneyards by Kristine Kathryn Rusch (Pyr Trade Paperback 01/17/2012) – This is Rusch’s third entry in the series following “Boss” an archaeologist who scavenges old spacewrecks. Dan liked the first one Diving into the Wreck, when he reviewed it a couple of years ago.

When multiple Hugo Award winner Kristine Kathryn Rusch decided to put her stamp on classic space opera, readers wanted more. Now Rusch’s popular character Boss returns in a whole new adventure, one that takes her far outside her comfort zone, to a sector of space she’s never seen before. Searching for ancient technology to help her friends find answers to the mystery of their own past, Boss ventures into a place filled with evidence of an ancient space battle, one the Dignity Vessels lost.

Meanwhile, the Enterran Empire keeps accidentally killing its scientists in a quest for ancient stealth tech. Boss’s most difficult friend, Squishy, has had enough. She sneaks into the Empire and destroys its primary stealth tech research base. But an old lover thwarts her escape, and now Squishy needs Boss’s help.

Should Boss take a Dignity Vessel to rescue Squishy and risk losing everything to the Empire? Or should Boss continue on her mission for her other friends and let Squishy suffer her own fate?

Filled with battles old and new, scientific dilemmas, and questions about the ethics of friendship, Boneyards looks at the influence of our past on our present and the risks we all take when we meddle in other people’s lives.

Boneyards is space opera the way it was meant to be: exciting, fast moving, and filled with passion. 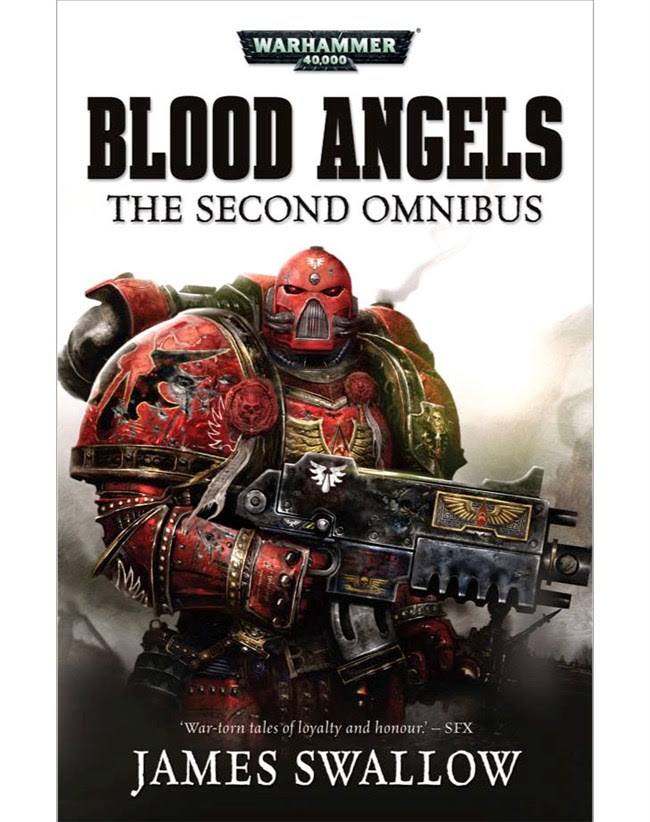 Blood Angels: The Second Omnibus (WH40K/Space Marines) by James Swallow (Black Library, Trade Paperback 02/07/2012) – This is yet another (and I mean that as a compliment!) repackaging of books into omnibus format from the fine folks at Black Library. Swallow has been playing in the Warhammer sandbox for quite some time, including the New York Times bestselling author of Nemesis.


THE STORY
The Blood Angels stand apart from the other Chapters of the Adeptus Astartes, descending from the skies on wings of flame. While they are renowned for their ten-thousand-year history of glorious battle and honourable deeds, these secretive Space Marines seek to hide the dark flaws at the core of their being – the Red Thirst and the Black Rage – from the rest of the Imperium. Do they fight any longer for the protection of mankind, or merely for their own salvation?

ABOUT THE BOOK
This omnibus edition continues the saga of the Blood Angels, featuring the novels Red Fury and Black Tide, as well as exciting short stories (Redeemed, Heart of Rage, Bloodline) and background material from New York Times bestselling author James Swallow. 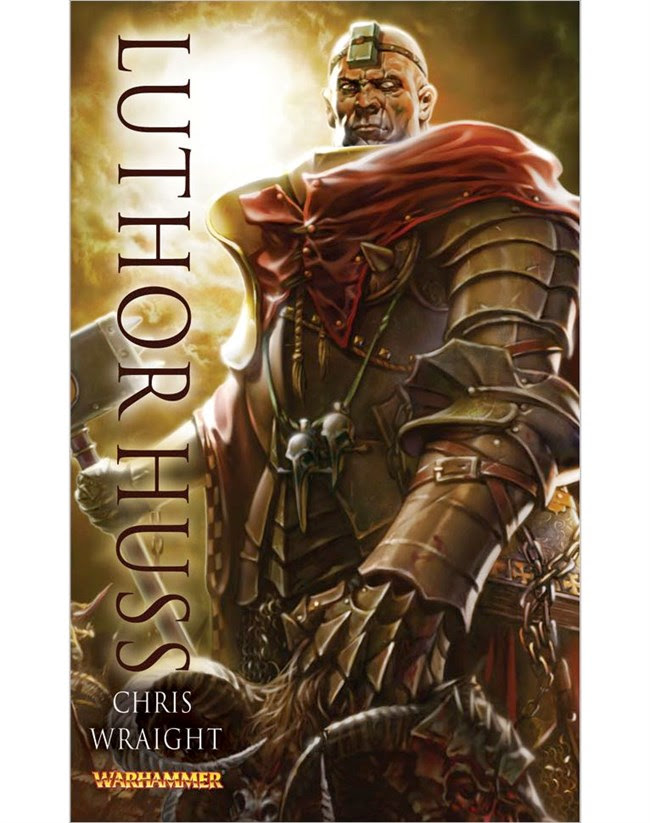 Luthor Huss by Chris Wraight (Black Library, Mass Market Paperback 2/14/2011) – Wraight continues to churn out Warhammer novels, this one looks to have a link to Graham McNeill’s Sigmar/Time of Legends trilogy:

Witch hunter Lukas Eichmann investigates a series of bizarre murders, which ultimately lead him into the haunted depths of the Empire at the head of an army of fanatical warriors. In the Drakwald Forest, Luthor Huss, warrior priest of Sigmar, battles to free the denizens of the forest from a plague of the walking dead. As their fates entwine, the two warriors confront a threat that will decide their future, while Huss must face a secret from his past if he is to survive and embrace his destiny as the Hammer of Sigmar.
<
at 1/22/2012