Just one book this week, this time from the fine folks at Orbit. 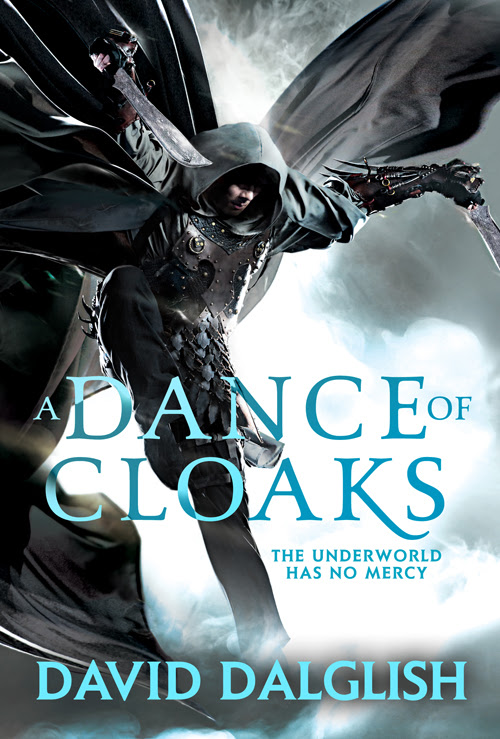 A Dance of Cloaks (Volume 1 of Shadowdance) by David Dalglish (Orbit, Trade Paperback 08/06/2013) – Following in the footsteps of Michael J. Sullivan, David Dalglish makes the leap from success in the self-published arena to traditionally published thanks to the fine folks at Orbit Books.

The Underworld rules the city of Veldaren. Thieves, smugglers, assassins... they fear only one man.

Thren Felhorn is the greatest assassin of his time. All the thieves' guilds of the city are under his unflinching control. If he has his way, death will soon spill out from the shadows and into the streets.

Aaron is Thren's son, trained to be heir to his father's criminal empire. He's cold, ruthless - everything an assassin should be. But when Aaron risks his life to protect a priest's daughter from his own guild, he glimpses a world beyond piston, daggers, and the iron rule of his father.

Assassin or protector; every choice has its consequences.
Fantasy author David Dalglish spins a tale of retribution and darkness, and an underworld reaching for ultimate power.

In Douglas Lain's debut novel set during the turbulent year of 1968, Christopher Robin Milne, the inspiration for his father’s fictional creation, struggles to emerge from a manufactured life, in a story of hope and transcendence.

Billy Moon was Christopher Robin Milne, the son of A. A. Milne, the world-famous author of Winnie the Pooh and other beloved children's classics. Billy's life was no fairy-tale, though. Being the son of a famous author meant being ignored and even mistreated by famous parents; he had to make his own way in the world, define himself, and reconcile his self-image with the image of him known to millions of children. A veteran of World War II, a husband and father, he is jolted out of midlife ennui when a French college student revolutionary asks him to come to the chaos of Paris in revolt. Against a backdrop of the apocalyptic student protests and general strike that forced France to a standstill that spring, Milne's new French friend is a wild card, able to experience alternate realities of the past and present. Through him, Milne's life is illuminated and transformed, as are the world-altering events of that year.

In a time when the Occupy movement eerily mirrors the political turbulence of 1968, this magic realist novel is an especially relevant and important book.

Perhaps no living author of imaginative fiction has earned the awards, accolades, respect, and literary reputation of Gene Wolfe. His prose has been called subtle and brilliant, inspiring not just lovers of fantasy and science fiction, but readers of every stripe, transcending genre and defying preconceptions.

In this volume, a select group of Wolfe’s fellow authors pay tribute to the award-winning creator of The Book of the New Sun, The Fifth Head of Cerberus, Soldier of the Mist, The Wizard Knight and many others, with entirely new stories written specifically to honor the writer hailed by The Washington Post as “one of America's finest.”

Shadows of the New Sun features contributions by Neil Gaiman, David Brin, David Drake, Nancy Kress, and many others, plus two new short stories by Gene Wolfe himself.
at 8/11/2013