Swept Away by the Tide - Backburner Books/Series

One thing I think people like myself who read review books regularly experience is that the more we read, the more we want to read. Despite Sturgeon's Law, there are indeed a fairly high percentage of good books being published.  At least from what I've been reading in the SFF realm of things.  To that point, keeping up with the new releases from popular authors and the hot and flashy debut authors can be a challenge. As my blog, review activity at SFFWorld and the SFFWorld Blog, as well as recent reviews at Tor.com, attest, I read a lot. I read, on average, about a book per week.  In more realistic numbers, take that "about one per week" to its annual conclusion, I've been averaging reading between 60 and 70 books read per year.  Even with that number, I feel like don't get to all the books I'd like to read.

One side effect is that focusing more on the newer releases of a given year means that a fair number of series I enjoy and have read over the years have tended to fall by the wayside. This is unfortunate, because at one point I enjoyed the authors a great deal. The evidence of my enjoyment of these books & series can be seen in the positive reviews I've posted to SFFWorld, discussions I've had in the SFFWorld forums,  or the posts I've made about those books/series/authors here on my blog.

Some of these series I feel guilty for not continuing because I did enjoy the books in the series; I want to support authors who have connected with me and entertained me. On the other hand, I’m curious if my lack of finishing them/continuing on with the series speaks to the quality of the series and my overall enjoyment of them rather than the annual, continuing tidal wave of new releases pushing them into more unreachable slopes of Mount Toberead.

In the summaries of the series below, I assess my enjoyment of the books in the series and determine if I will (ever) forge ahead with those series. The reasons will be a mix of both of these eventual outcomes, because for some of these series, I will catch up with them and others the chances of that happening aren’t quite as good.

A last bit of preamble, these are series in which I’ve ventured fairly significantly. At the very least more than one book/the first book, none of these series “falloffs” involve me just not reading the final book, nor will any of the series be those where I’ve totally given up on the series, nor will these be series I am plodding forth (Dresden Files, Vorkosigan Series, etc). So, without further ado, here are the books/series that were swept away by the tide of review/current year releases. 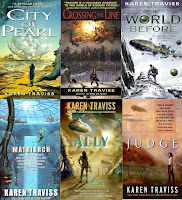 I really enjoyed the first three installments of this Military SF series for a lot of reasons. From reading the first three novels, I felt Traviss had great POV characters, interesting alien cultures and overall, just entertaining stories.

Proof is in the pudding: My reviews of City of Pearl and the sequel Crossing the Line.  Books remaining to be read: Matriarch, Ally and Judge.

Chance of returning to this series? I'd say dead even at 50% mainly because I’ve gone 50% through them, they are relatively short and I recall them being fairly quick reads.
Side note, Traviss has a new novel, Going Gray, publishing in 2014 seemingly unrelated.

Marla Mason by Tim Pratt
I first read about Marla in The Solaris Book of New Fantasy edited by George Mann (2007) and was very intrigued.  I read the first two books back to back. 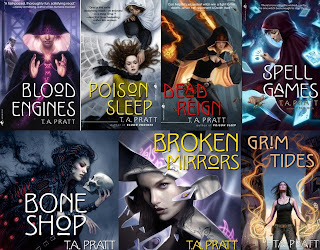 Proof is in the pudding: My reviews of enjoyed the first three novels Blood Engines and Poison Sleep. I’ve had a copy of the third book Dead Reign on Mount Toberead for nearly five years in what is one of the books I’ve had for the longest amount of time. Since reading the second book, I’ve noticed that Pratt has been self-publishing these books, including (I think) at least one of them through Kickstarter.

Chance of returning to this series - Better than 50%, I’ve got the third book and loved the world Pratt created around Marla, particularly the Lovecraftian feel. The nature of Urban Fantasy novels such as these seems more conducive to being read as standalone and might work with such a time lapse.

Malazan Book of the Fallen by Steven Erikson and Ian Cameron Esslemont
Yeah, this is a big one, right? I’ve read the first seven by Erikson (up to Reaper's Gale) and Esslemont’s first. For the most part, I enjoyed them a great deal, but reading Forge of Darkness last year really soured me on attempting to finish out either the mainline series by Erikson or the books Esslemont’s been writing. I've also seen less than positive response to the series' conclusion. 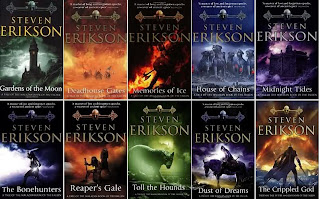 Proof in the pudding: My blog post and reaction to The Bonehunters (also here) and my review of Night of Knives. It has now been 5 years since I last read a mainline Malazan novel and I’m concerned about the challenge of remembering past elements of the series were I to pick up book eight, Toll the Hounds.

Chance of returning to this series - Less than 50%. Even though I have the final three books in physical form, they are huge books and as I’ve said, Forge of Darkness was such a difficult book for me to read.

Crown of Stars by Kate Elliott 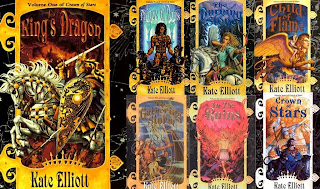 I loved the first four King’s Dragon, Prince of Dogs, The Burning Stone, and Child of Flame, giving them (in my personal spreadsheet/reading log) scores ranging from 7 to 8.5, but this series really suffered from the Wave of Review books/reviewing.  My concern with this series, even more so than Malazan is just how much I likely have forgotten since reading Child of Flame back in 2003. Also, these books tend to be on the doorstopper side of the fence. I loved the worldbuilding in these books, but my other concern is how much my enjoyment dipped on her recent series Spiritwalker, enjoying the first Cold Magic but not quite so much with Cold Fire, book 2 to the point that I didn’t and don’t plan on reading the final installment.

Proof in the Pudding: No reviews on this series as I read through the first four before I started writing book reviews for SFFWorld.

Chance of returning to this series - I’d say dead even at 50% because so much of the feel of these books still rumbles around in my head and I am more than 50% through the series, with only 3 of the remaining 7 books yet to be read. 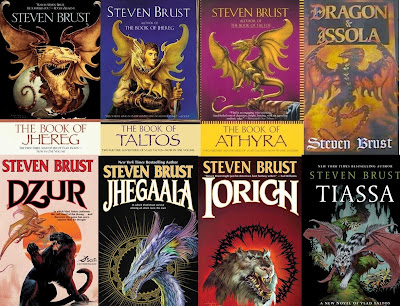 I had been catching up with this series through each of the omnibus editions released The Book of Jhereg, The Book of Taltos, The Book of Athyra, and Dragon & Issola (one of many, many great Science Fiction Book Club Omnibus editions that make SFBC worth joining, quitting, and rejoining) and up to Dzur.

Proof in the pudding: No reviews except for, like The Bonehunters, a blog post professing my enjoyment of the book and series as a whole.

Chance of returning to this series - This is probably the series I’m most likely to pick up again as the Taltos books, of those mentioned in this post, are the books I’ve enjoyed the most. I’ve read 10 of the 13 books published and only have three to read to be caught up, or four if you count the forthcoming Hawk publishing in 2014. I also happen to own book 11, Jhegaala, so if Tor decides to omnibify books 12 and 13 Iorich and Tiassa, my decision to jump back into the world of Vlad Taltos would be even easier to make.

So, am I the only reader/blogger/reviewer who has experienced this Sweeping/Backburner effect?
at 8/28/2013

No, you aren't. I really *should* ask some other types about this sometime. ;)

The Malazan books, which I have read in spurts, is an example of this phenomenon for me just as you. And they are big books, big investments.

I actually took two attempts to get through Malazan. On a trip to Canada over a decade ago, I picked up Gardens of the Moon and Deadhouse Gates before Erikson was nabbed by Tor, read through them enjoyed them. Fast-forward another 5 years, I figured diving back into Malazan would be a good way to kill time during jury duty, so re-read Gardens and Deadhouse and about one Malazan per year up until Reaper's Gale. I probably enjoyed House of Chains the most.

Yeah, I'm one of those who were less than pleased with the conclusion to the Malazan Book of the Fallen, so much so that I've been reluctant to dive into Forge of Darkness. It took me several attempts to make my way through Gardens of the Moon, but after that I was hooked. An amazing read, with some mind-blowing mythology and world-building, but it felt as if just offered an arbitrary conclusion for the sake of ending things.

Crown of Stars is a series I've wanted to get into (I love losing myself in a doorstopper), but it's always hard to find time to read old material when there's so much new material begging for a read/review.